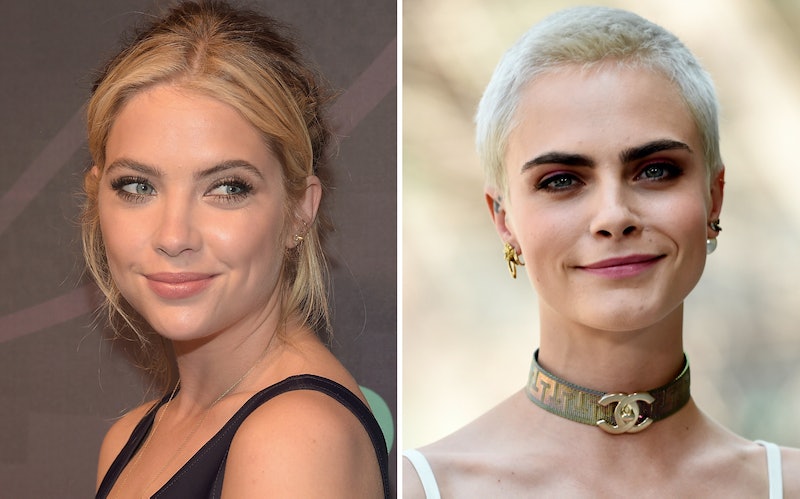 Being sex positive is a beautiful thing, and it looks like this British supermodel-turned-actor and her American sweetheart are totally leading by example. Yep, Cara Delevingne & Ashley Benson were papped carrying a sex bench into their L.A. home. OMG.

The pair were photographed emptying the car after a big shopping trip, unloading the new piece of furniture and giggling a whole bunch. The leather bench (don't worry, it's vegan) is called 'The Master Series Faux Leather Sex Bench with Adjustable Restraints'. OMG? WTF? BDSM? And good on them. You know you've made it when you have enough room in your home for wild sex machines. Or at least, like, a cupboard to hide them in when your nan comes round. That is the basic dream of all sexual adventurers out there. And, come on, it's 2019. Who doesn't have a little adventure in them, am I right?

Although it's not known where the pair purchased their new bench, they had been photographed popping to Target on the same day. Now, I'm no retail expert, but my experience of Target tells me that they did not buy it there.

Master Series Obedience Extreme Sex Bench with Restraint Straps
Amazon
Get your kink on with the same sex bench that Cara and Ashley have.

As I've said before, being sex positive is totally beautiful, and Delevingne has been shouting it from the rooftops of late. Speaking on RuPaul and Michelle Visage's podcast What's The Tee?, the model/actor revealed she likes to be in charge in the bedroom. "It is different with men and women," she said. "For me, I’m always very submissive with men, always. But then with women I’m the opposite."

During the interview, she also revealed that she would rather stay in and have sex then go out clubbing. Which is basically what anyone in their right mind would say IMO. The model later described sex as "feral," proving that sleep overs round at casa Delevingne are pretty lit.

Benson, who you probably know best from the iconic show Pretty Little Liars hasn't said too much publicly about her sex life but judging by all the smiling going on, and the flipping sex bench, all is good on that front.

The pair met on the set of the new film Her Smell in which they star as lovers Cassie and Roxie in riot grrl band Akergirls. The movie, which also stars Handmaiden's Tale actor Elizabeth Moss, is rock n roll AF and looks at things from the rarely seen female perspective of the industry. The IMDb bio for the film reads: "A self-destructive punk rocker struggles with sobriety while trying to recapture the creative inspiration that led her band to success."

Although it's not quite clear how long the pair have been dating, what is known is that they were first spotted smooching in Heathrow Airport back in August 2018. Things appear to be going from strength to strength with Benson meeting the family and the pair featuring on each other's social media a lot.

With all of this sex positivity and all the general fun this pair seem to be having, they are establishing themselves not only as celesbian icons but also as total couple goals.