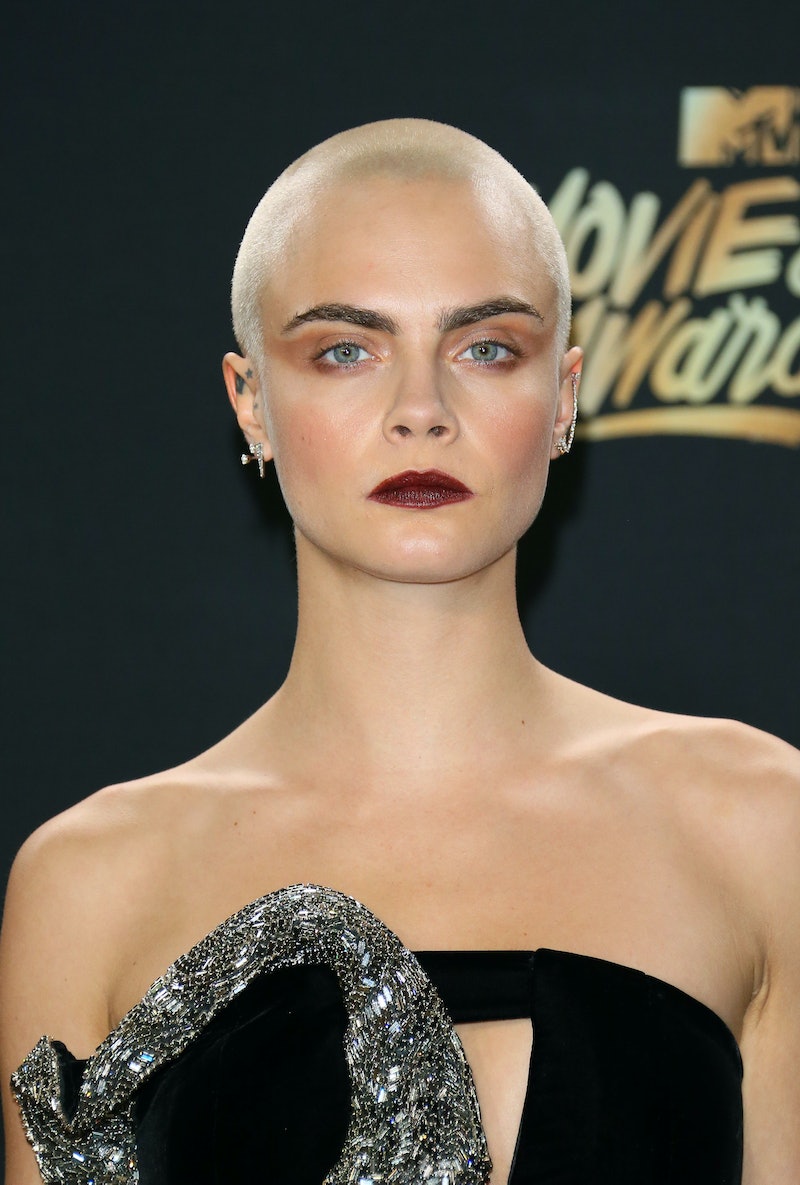 Another famous woman has come forward with allegations against Harvey Weinstein. On Instagram Wednesday, Cara Delevingne made claims about Weinstein, including that he allegedly made an unwanted advance on her, among several other instances that allegedly occurred between the two. Delevingne's extremely detailed statement highlights just how much power Weinstein had in Hollywood and include mention of other women who she claims were present during the alleged incidents. Bustle has reached out to Weinstein's lawyer and spokesperson for comment on Delevingne's claims, but did not receive a response at the time of publication.

"When I first started to work as an actress, I was working on a film and I received a call from‎ Harvey Weinstein asking if I had slept with any of the women I was seen out with in the media," the Suicide Squad actor claims in her statement. "It was a very odd and uncomfortable call....I answered none of his questions and hurried off the phone but before I hung up, he said to me that If I was gay or decided to be with a woman especially in public that I'd never get the role of a straight woman or make it as an actress in Hollywood."

After that, the 25-year-old model brings up other unnamed people who were allegedly present during these situations including an unnamed director, a female assistant of Weinstein's, and a woman Weinstein allegedly asked Delevingne to kiss in front of him. It's unclear what any of these people knew of Weinstein's alleged indiscretions, but Delevingne's accusations highlight the possibility that the way in which Weinstein allegedly took advantage of his power over women involved an intricate plan rather than being spur of the moment.

This is an idea that was also touched on by Italian actor Asia Argento, who starred in B. Monkey, which was distributed in the U.S. by Miramax in 1999, In Ronan Farrow's piece for the New Yorker, published Tuesday, he spoke to 13 different women (actors Rosanna Arquette and Mira Sorvino included) who spoke out against Weinstein. Three of the women also alleged Weinstein had raped them, including Argento. (These claims were denied by a spokesperson for Weinstein, below.) In 1997, she alleged she was invited by of one of Weinstein's producers to what she thought was a Miramax party at the Hôtel du Cap-Eden-Roc on the French Riviera. However, according to Argento, when she arrived, the producer allegedly took her upstairs to a hotel room, where Weinstein was the only one waiting. After the producer allegedly left, Argento claims Weinstein sexually assaulted her, despite her telling him to stop. This producer denied bringing Argento to the room to The New Yorker.

Arquette also alleged to The New Yorker that in the early '90s she was invited to the Beverly Hills Hotel, where she believed she was picking up a script for a new film. However, once she arrived, Arquette claims she was told to meet Weinstein in his hotel room. Upon arriving at his room, Weinstein was allegedly wearing only a bathrobe and made advances that Arquette said she rejected.

Weinstein's spokesperson, Sallie Hofmeister, told The New Yorker, "Any allegations of non-consensual sex are unequivocally denied by Mr. Weinstein." The rest of the statement reads:

Mr. Weinstein has further confirmed that there were never any acts of retaliation against any women for refusing his advances. Mr. Weinstein obviously can’t speak to anonymous allegations, but with respect to any women who have made allegations on the record, Mr. Weinstein believes that all of these relationships were consensual. Mr. Weinstein has begun counseling, has listened to the community and is pursuing a better path. Mr. Weinstein is hoping that, if he makes enough progress, he will be given a second chance.

In her statement, Delevingne claims that "a year or two later" she met with Weinstein and an unnamed director in a hotel lobby about a movie. Delevingne claims that after the director left their meeting, Weinstein asked her to stay. She writes, "As soon as we were alone he began to brag about all the actresses he had slept with and how he had made their careers and spoke about other inappropriate things of a sexual nature."

Delevingne claims her encounter with Weinstein then went from bad to worse, making her feel unsafe in the process. He allegedly invited her to his hotel room, which she says she declined before asking a female assistant of Weinstein's if her car was outside. "[His assistant] said it wasn't and wouldn't be for a bit and I should go to his room," Delevingne alleges. "At that moment I felt very powerless and scared but didn't want to act that way hoping that I was wrong about the situation."

Delevingne says she ended up going to his room and felt "relieved" after seeing "another woman" was there, which made her feel "safe." Then, she claims Weinstein asked her and the other women to kiss and that the unknown woman started to make "advances upon his direction". In an attempt to "make the situation better," the actor says she tried to turn it into a type of "audition" and to make it "more professional" by beginning to sing.

And here's where her experience allegedly became even more uncomfortable:

After singing I said again that I had to leave. He walked me to the door and stood in front of it and tried to kiss me on the lips. I stopped him and managed to get out of the room.

She says she got the part for the film, but she didn't specify which movie it was. Delevingne starred in the 2017 film Tulip Fever, which was distributed by The Weinstein Company, but, again, she didn't name the movie. As she writes,

I still got the part for the film and always thought that he gave it to me because of what happened. Since then I felt awful that I did the movie. I felt like I didn't deserve the part. I was so hesitant about speaking out....I didn't want to hurt his family. I felt guilty as if I did something wrong. I was also terrified that this sort of thing had happened to so many women I know but no one had said anything because of fear.

On Friday, Oct. 5, The New York Times released an exposé on Weinstein describing decades of allegations of sexual harassment and assault and reported settlements involving different women. That same Friday, Weinstein's lawyer, Charles Harder, said his client would be suing the Times. "The New York Times published today a story that is saturated with false and defamatory statements about Harvey Weinstein," Harder wrote. "It relies on mostly hearsay accounts and a faulty report, apparently stolen from an employee personnel file, which has been debunked by nine different eyewitnesses. We sent the Times the facts and evidence, but they ignored it and rushed to publish. We are preparing the lawsuit now. All proceeds will be donated to women’s organizations."

After the Times exposé, Weinstein provided a written statement that partly read: "I appreciate the way I've behaved with colleagues in the past has caused a lot of pain, and I sincerely apologize for it. I realized some time ago that I needed to be a better person and my interactions with the people I work with have changed." In this statement he did not confirm or deny any of the specific allegations against him. After the publication of the Times story, Weinstein was fired by The Weinstein Company and there were four other resignations from his all-male board.

Similar to Delevingne, Gwyneth Paltrow and Angelina Jolie spoke with the Times Tuesday and made allegations that Weinstein had harassed them. Regarding their claims, Weinstein's spokesperson told the Times:

"Any allegations of non-consensual sex are unequivocally denied by Mr. Weinstein. Mr. Weinstein has further confirmed that there were never any acts of retaliation against any women for refusing his advances. He will not be available for further comments, as he is taking the time to focus on his family, on getting counseling and rebuilding his life."

Like all of the woman who are refusing to continue to remain silent, Delevingne's openness shows bravery and that there is "strength in our numbers," as she writes in a different Instagram post. "As I said, this is only the beginning," she says. "In every industry and especially in Hollywood, men abuse their power using fear and get away with it. This must stop. The more we talk about it, the less power we give them. I urge you all to talk and to the people who defend these men, you are part of the problem."

The fact that more and more individuals continue to make similar allegations against Weinstein sadly shows how many women felt powerless and fearful in his presence.