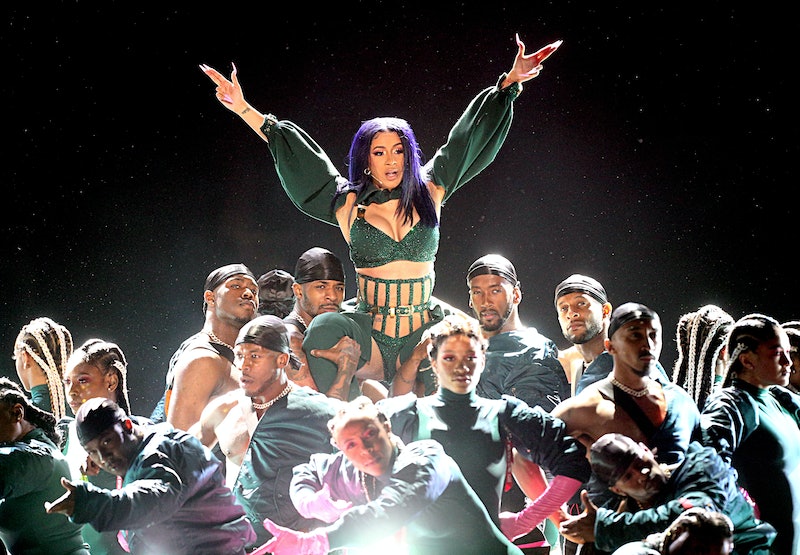 Cardi B may have skipped the blue carpet at the BET Awards, but she opened the main show like no other — and looked really good while doing it. After debuting some her most stellar looks at the Grammys and the Met Gala this year, Cardi B's 2019 BET Awards outfits included not only one but two green outfits while she performed on stage, then accepted the award for Album Of The Year. In fact, her ensembles were so good you'll want to roll your R’s hard when you say “Okurrr” to these looks.

To say Cardi is a new-age fashion icon is a serious understatement. The rapper has proven her talents go far beyond just spitting wild bars and flows over beats, extending to the realms of style. Cardi kicked off the BET Awards with an emerald performance outfit designed by Bryan Hearns that featured a cut-out corset and puffy sleeves. And in typical Bardi fashion, the look featured some serious chaps and a bikini-like structure. Add a little crystal flare, and you have a certified look.

For the performance, Cardi kept her hair in a sleek lob that she flipped around effortlessly and she danced and grooved on stage. For her makeup, the star kept the focus on her eyes, with bold lashes, thick, black liner, and some serious gold, glittery eyeshadow. Plus, Cardi's nude lip added the perfect contrast to the eye-focused glam drama.

Soon after her performance, Cardi accepted her award for her album Invasion Of Privacy — and she wore a different shade of green to do so. But, trust me, this look will make you just as envious as the first. Cardi's second lime green look will remind you of Nickelodeon slime — but only the most glam slime you've ever seen.

With structured shoulders that would make even the most evil Disney villain jealous, Cardi's look — which was designed by Nicolas Jebran — was glimmering with crystal detail. The bright green look had intricate braiding at the top, along with a structured bodice. Instead of a skirt, the long-sleeved bodysuit had strips of fabric hanging down for length and drama, as well as two high slits. The strips were so long, in fact, that Cardi had to carefully tip-toe up the stage stairs to collect the award and not trip.

Though Cardi kept her makeup the same as her performance look, she pulled her hair into a sleek ponytail, with slicked down baby hairs, and added on some seriously expensive earrings to complete phase two of her BET looks. The outfit was fit for a certified winner — as Cardi was at the award show. "I'm glad that I made an album that your sister, your mother, your grandmother like it, all you b*tches be like aye-yi-ki-ki, thank you very much!" she shared with the crowd as she accepted her first award on stage.

Judging by her looks tonight, clearly the rapper is telling fans and viewers alike to forget "Bodak Yellow," because she's all about making you green with style envy.