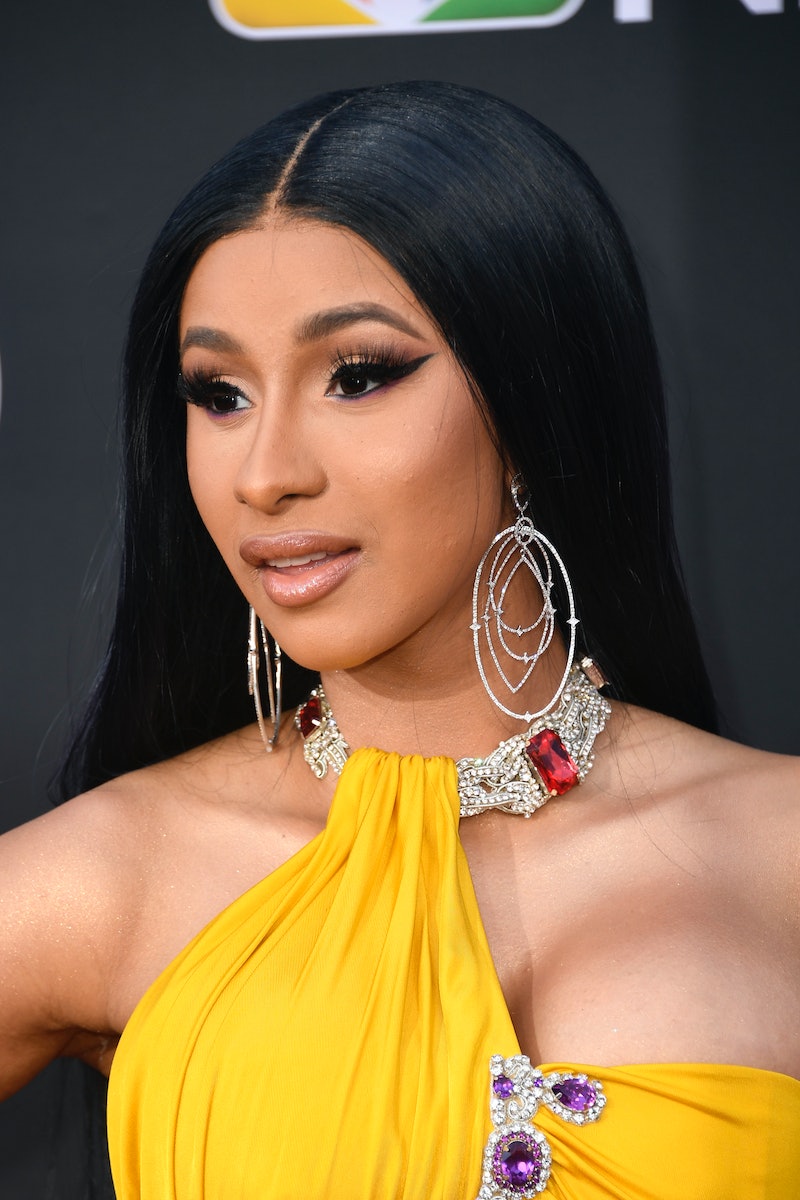 Cardi B knows how to pull off a red carpet look, both turning heads and breaking necks. And Cardi B’s Billboard Music Awards outfit is no exception because it’s pure fire. Her look shows she’s ready to make an acceptance speech — and considering she’s already nominated for 21 awards, the odds are in her favor. The rapper hit the red carpet in a beautiful yellow dress that features a half shoulder wrap bra with a matching high slit skirt. The look is covered in jeweled accents, including under the bust, along the skirt, and in a choker shape at the neckline. Cardi paired her stunning two-piece ensemble with even more sparkle in the form of a pair of silver heels and drop diamond earrings by Loree Rodkin.

Any red carpet-ready outfit calls for a sickening beauty routine, and Cardi’s hair and makeup complemented her dress seamlessly. Cardi and her team pulled out all the stops with her beauty look, styling her hair down in a middle part style, keeping it sleek and straight. For past award shows, Cardi has pretty much always worn a full face of makeup and on Wednesday the “I Like It” rapper kept that vibe going with a gold, smoky eyeshadow that matched the color of her outfit, a purple and pink eyeliner, and a nude and glossy-colored lip. Cardi’s overall look, just like her, is bold and unapologetically fierce.

With the rappers hair laid for the fashion gods and doused in all yellow, the two-piece gown Cardi wore is reminiscent of a look Cher wore back in the '70s.

One of her most iconic fashion choices, Cher wore a similar two-piece dress decorated with jewels that showed off the singer's midriff at the 1973 Oscars. At the time, such a look was a rebellious act against the show's usual conservative dress wear. If the power behind this look isn't Cardi's style, then what is?

This is the first time Cardi has attended the Billboard Music Awards, but she did perform at Billboard’s Latin Music Awards that aired on Telemundo in 2018. The same year, Cardi landed eight Billboard nominations, winning one award for Rap Female Artist.

In April, it was first announced that Cardi had earned 21 nominations in 18 categories for this year's BBMAs, such as Rap Female Artist, Top Artist, Rap Song, and even Latin Song for her feature in DJ Snake’s “Taki Taki." Cardi took to Instagram to show her gratitude in a video “Jstlbby-style” waving her acrylic stiletto nails to the camera.

"Sooo proud of myself", Cardi captioned the video. "21 Billboards awards nominations! Being nominated is just as good as winning to me!"

Cardi's nominations almost made the cut as the most nominations in Billboard history. However, the rapper just missed the mark as Drake and The Chainsmokers both received 22 nominations in 2017.

A mix of the rapper's blunt, yet charming personality, sickening style, and spitting badass bars is a big part of why fans dig her. Twenty-one Billboard nominations in her pocket is just the icing on top.