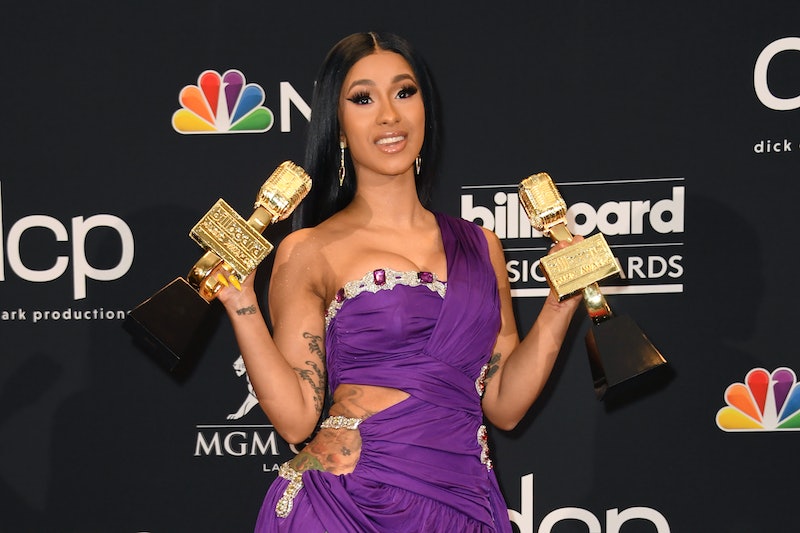 Cardi B has a lot on her plate. She’s currently working on her sophomore record, following her Grammy-winning 2018 album Invasion Of Privacy, on top of designing a clothing line for Fashion Nova, and caring for her daughter Kulture. She even had a huge night at the 2019 Billboard Music Awards, taking home six trophies and making fun of her own wardrobe malfunction. But perhaps most significantly, the rapper is making her feature film debut, and Cardi B’s role in Hustlers with Jennifer Lopez is shaping up to be an essential watch.

Hustlers will center on a crew of former strip club employees who use their skills to turn the tables on some Wall Street clients, and is based on a true story that was famously reported by New York Magazine in December 2015. The film will star Constance Wu, Lili Reinhart, Keke Palmer, Julia Stiles, and Lizzo, in addition to Lopez and Cardi. Recently, Cardi talked to Entertainment Tonight and dished on how she landed her role in Hustlers, revealing that J.Lo, who is also an executive producer on the project, called her specifically to get her in the film.

According to the rapper, Lopez originally wanted her to play the second lead part alongside her own character Ramona, but due to the rapper’s busy schedule, she had to settle for a smaller supporting role. Regardless of how much she’s actually in it, Cardi felt an immediate attachment to the film because of her roots in strip clubs. “Even though my schedule's busy it's, like, I had to be in this movie,” she said. “This movie is something I can relate [to]." The rapper continued, "All the actress in the movie I can tell them, like, 'No, no, no. This is how it goes.'... The club that the movie is based on, that’s the first type of club that I worked in. This was my life.”

Although the artist hasn’t actually been on set yet, she told ET that she anticipates that Lopez will be “caring," just like she was when they worked together on the epic “Dinero” music video.

The highly anticipated film is scheduled to be released on September 13, meaning that there will be a fast turn-around time from set to movie theater, and we are so blessed.

The future is bright for Cardi, what with a major motion picture and second album in the works, but despite her willing to dip her toes into many fields, there’s one job that Cardi isn’t interesting in taking on: politics. “I feel like that's a big responsibility,” she said to ET. “When you're a political person you cannot let millions of people down that voted for you, that rooted for you to make their lives better. So that's just not my thing.”

She has some justified fears that she wouldn’t be able to get anything done if she even were to get elected to office. “I don't wanna promise somebody something and then it won't happen because people are not going to vote for what I want or certain things won't happen. For example, I want free healthcare and I feel like college education should be free,” she said. “I can't promise that because I don't know how laws happen.”

Who knows, maybe she’ll learn some pointers and change her mind about politics in the future. President Bardi does have a nice ring to it.