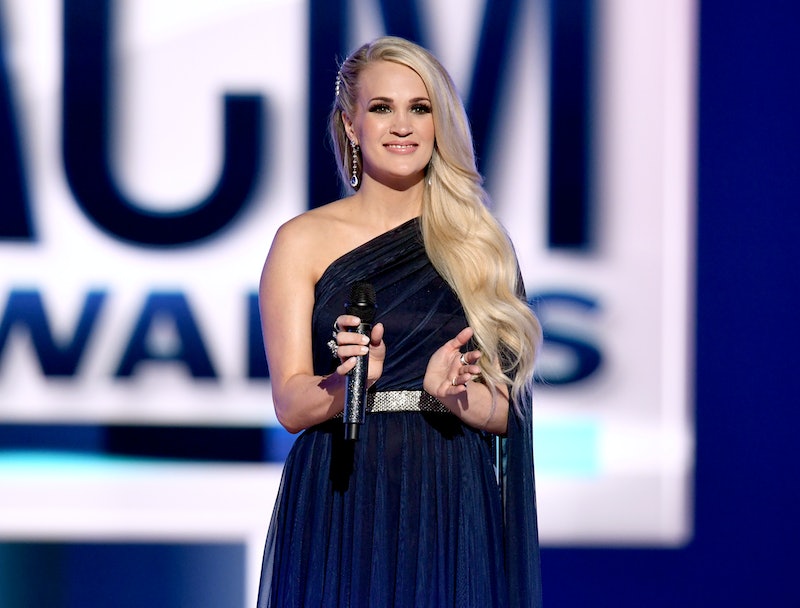 It's been 14 years since one of the one of the world's biggest country stars arrived on the scene, and to celebrate Carrie Underwood shared an American Idol throwback photo from when she won the singing competition series. On May 26, the singer posted a photo of the moment she won on her Instagram Story, reminiscing on how formative and special it was. Before that moment, she was a 22-year-old singer from rural Oklahoma. After it, she was a country music star.

“14 years ago today… my world changed,” she wrote on her Instagram Story. Then, she made fun of her face in the photo and referenced her hit single, "Cry Pretty." "It's true when I say that 'you can't cry pretty,'" she wrote.

So much has happened on the Idol stage since Underwood left it. The show went on to produce 15 seasons on Fox before it was cancelled and then renewed in 2017 by ABC. On May 13, the network officially announced that the reboot will have a third season to air in January 2020, per TVLine.

Underwood's trip down memory lane comes shortly after her return to the Idol stage for the Season 17 finale in which 18-year-old Laine Hardy was crowned the winner. She performed her song "Southbound" with the same passion she emanated during her run on the show. Host Ryan Seacrest asked her to recall how she felt when she won. She remembered "being horrified, scared, nervous, excited, all of the above."

Not all winners of the singing competition have gone on to be as groundbreaking and successful as Underwood. Her debut single "Inside Your Heaven" reached number one on Billboard's Hot 100, and she landed many more on the chart as her career has progressed, including "I Told You So," at number two in 2009, and "Dirty Laundry" at number three in 2017. Her musical career continues to flourish, and she is now married to NFL player Mike Fisher. They have two kids, Isaiah, 4, and Jacob, 4 months.

She recently told E! News about her hectic but rewarding experience with bringing the family on tour. "It just makes my heart happy that I have the kind of job where I can bring my children with me and they can be a part of it," she said. She's currently on her "Cry Pretty" Tour 360 and just finished up the Vancouver stop.

Underwood shares such iconic Idol success with fellow winner Kelly Clarkson. Clarkson was the show's Season 1 winner in 2002, and since Underwood's win, the two have become close friends and bonded over the experience.

In 2016 on Elvis Duran and The Morning Show, Clarkson said that fans frequently mistake her for Underwood. She said it could be because they're "both blonde and from American Idol." Fans have tried to pit them against each other in the past, but they used it as an opportunity to promote female empowerment.

"I think we’re both winning in life and pretty blessed! Singers, mamas, CEO’s," Clarkson tweeted in 2018. Underwood responded, "I do wish more publications would just celebrate women's success without pitting them against each other... Just my thoughts...anyway... Love ya’!" she told Clarkson. "Hope you’re well!"

Perhaps an Idol winner reunion will bring them together again soon. How iconic would that be?

More like this
20 Years Later, Kelly Clarkson & 'American Idol' Judges Reunite For Her Hollywood Walk Of Fame Star
By Radhika Menon
How Ghosts Inspired Kesha’s New Music
By Jake Viswanath
Jason Derulo Is Launching A New Singing Show In The UK
By Maxine Harrison
Everything To Know About Taylor Swift’s 10th Studio Album, 'Midnights'
By Grace Wehniainen and Jake Viswanath
Get Even More From Bustle — Sign Up For The Newsletter