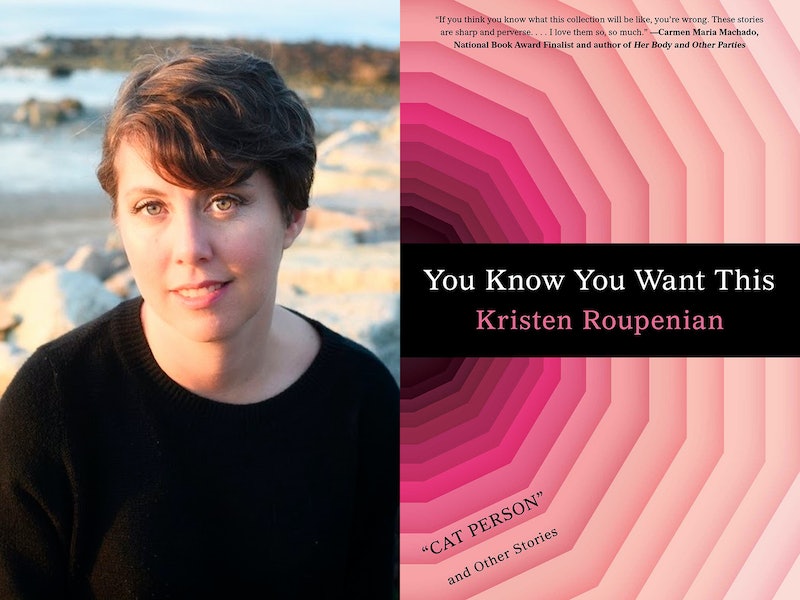 When "Cat Person" — the New Yorker-published story about a bad date between college student Margot and thirty-something Robert — went viral in December 2017, no one was more surprised than its author, Kristen Roupenian, who had previously published just one story in a print literary magazine.

"I feel like the closer you are to the world of short fiction, the more you realize how unlikely it was," Roupenian tells Bustle in a phone conversation. "It’s also like all of my dreams came true. I have enough money to write for a long time. I’m figuring out what that means, too."

The article was New Yorker's second-most-read article of 2017, despite its December publication date. While some readers found it frighteningly relatable — "i keep accidentally saying my ex's name instead of "robert" in conversations about cat person," wrote Darcie Wilder on Twitter — just as many others hated it. (Someone even created a Twitter account called Men React To Cat Person to track men's criticisms of the story.) However you felt about "Cat Person," it must be agreed upon that the story propelled Roupenian into instant literary stardom and helped her secure a seven-figure two-book deal with Simon & Schuster. The first book, a short story collection titled You Know You Want This, is out now, and it opens with a far more macabre tale than "Cat Person."

"I feel like the closer you are to the world of short fiction, the more you realize how unlikely it was."

That first story — "Bad Boy" — circles around a couple who invite their friend, a man who has recently ended a relationship, to sleep on their couch while he copes with the breakup. Initially, the couple are annoyed by his constant presence; but as the days pass, they become addicted to the idea of him listening to their love-making. Soon, they find that they can't get turned on without him in the next room. As the story progresses, their desires and obsessions take a diabolical turn that culminates in a singularly shocking scene.

"I wanted the collection to announce itself fairly quickly," Roupenian says. "To me, it’s so clear that this isn’t a collection for everyone. Not everyone’s expectations are going to be met. Some people’s thresholds will be exceeded. There was no part of me that wanted to lure people in with 'Cat Person' and then pull the rug out from under them with 'Bad Boy.'" (You can listen to an excerpt of "Bad Boy" — as read by Aubrey Plaza — from the audiobook below.)

Roupenian admits to the normal first-time author nerves, but she already has a career's worth of experience navigating the tumultuous world of social media reviews. As with "Cat Person," this short story collection has a life beyond its author, and she understands that she cannot control how people react to her stories, gruesome and frightening as they may be. "The contract is you put the book out and then you let people do with it what they want," she says.

All of the stories of You Know You Want This explore the dark impulses of human nature, but only one deals as explicitly with dating as the story that made her famous. "The Good Guy" follows a man named Ted, who believes himself to be in the right — or at least justified — in his persistent mistreatment of women. "There’s a bad Ted underneath the good Ted, yes, but then, under that, there’s a Ted who’s good for real," he tells himself near the end of the story. "But no one ever sees him; his whole life, no one ever has. Underneath it all, I’m just that kid who wanted nothing more than to be loved and didn’t know how to make it happen, even though I tried and tried and tried." The story is a stark counterpoint to "Cat Person." Tim is less vicious and frightening than Robert, but they wield the same social power over the women they date.

'You Know You Want This' by Kristen Roupenian
Amazon

Published just a few months after the accusations against Harvey Weinstein were made public by the New York Times and New Yorker, "Cat Person" arrived at precisely the right moment. It tackled rape culture from a perspective that had — at that point — not been discussed as loudly or with quite as much nuance: What happens when a date takes a turn for the scary, but never quite reaches the point of sexual assault? It is an experience many people relate to, so much so that some readers believed "Cat Person" to be a personal essay, not a work of fiction.

"It is a very natural impulse to imagine an author on this other side of a story and to form opinions about them based on what you’ve read," Roupenian says. "I think that with my story in particular and because no one knew who I was — there was just one picture of me smiling at the camera for everyone to look at me — it was easy for them to conflate me with Margot."

"I worked so hard to disappear from that story and make it feel genuine, immediate, and real," she adds. "How can I be resentful when it seems like people are responding to it in a way that I wanted?"

"Cat Person" was a contemporary critique of modern dating, but the other stories of this collection have less grounding in the real world: They are macabre, grotesque, and occasionally fantastical. Though not as obviously horrific as its siblings in the collection, "Cat Person" is just as much a tale of terror as the others, and Roupenian made a deliberate decision to place it in the middle of the book. When you arrive at "Cat Person" in You Know You Want This, you have already read five horror stories.

"'Cat Person' comes at a point when readers' expectations of what is possible to happen are very, very wide," she says. "The moment I was thinking about in particular was when Margot is coming into Robert's house and she has the thought, 'What if he murders me? What if it’s a dungeon? What if it’s a cage?' I wanted that to be possible in a way that I didn’t think it would be if 'Cat Person' was the first story of the collection. I wanted that genuine fear to have layers of possibility."

"'Cat Person' comes at a point when readers' expectations of what is possible to happen are very, very wide..."

The placement of the stories is perhaps the true genius of this collection. The last story, "Biter," delivers as much visceral impact as the first. It follows a woman with an obsession with biting people; she is particularly fixated on the idea of sinking her teeth into one male co-worker, and when she finally gets her opportunity, it is a satisfying experience for her and the reader. Roupenian describes the story as a "diabolical catharsis."

"For me, to read a book that is horrifying but satisfying is a kind of purge. It leaves me feeling uncomfortable and shaken but also understood. I went to a place that was dark but I didn’t go myself alone at night," Roupenian says. "Especially women who have a hunger for those kinds of stories and now are starting to get them. Now are starting to get the full range of darkness and anger and frustration."