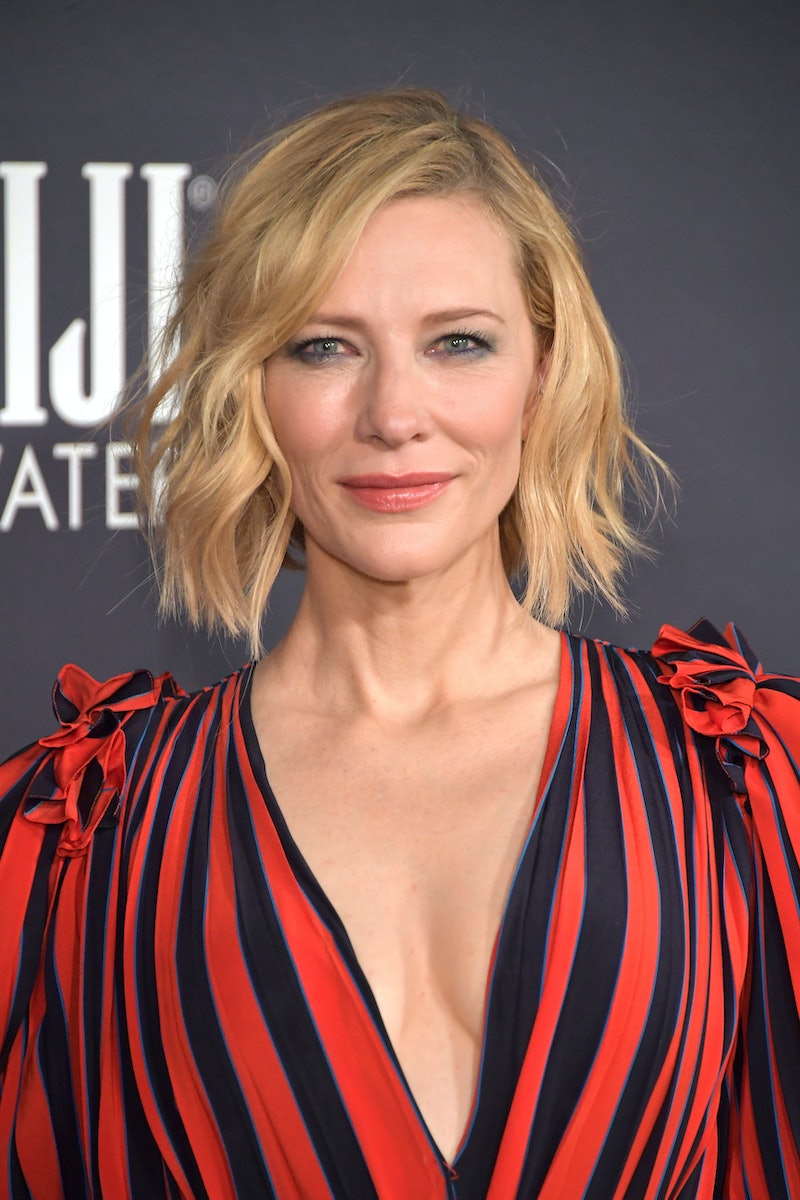 There are certain statements that all women find themselves forced to repeat over their lifetime. Cate Blanchett's speech at the 2017 InStyle Awards on Monday night featured one such statement, and it was so relatable that it brought the house down. Before Blanchett's viral quote about women was even said, the actor began her speech by celebrating who and what she considered to be "true icons of style":

"It's always those women who've been utterly themselves without apology. Whose physical presence and their aesthetic is really integrated in a non self-conscious way into part of who they are. And women who know how they look is not all of who they are, but just an extension of that. It's about women who feel free to wear what they want, when they want, and how they want to wear it."

Surprisingly, that isn't the part that celebrity women were soon inspired to share across social media. it's the quote that Blanchett chose to follow up this introduction that provoked rapturous applause at the event. The Oscar- winning actor said, "I mean, you know we all like looking sexy, but it doesn't mean we want to f*ck you," and the crowd went wild.

Part of the power of Blanchett's now viral sentiment is its simplicity. It's a statement that shouldn't need to expressed, and yet, if the scores of women who have recently shared their experiences with sexual harassment and assault are anything to go by, then we need to be turning up the volume on that statement now.

Because, as Blanchett makes clear within her entire speech, our looks shouldn't define us — not in that way. Our aesthetic is a proud extension of our autonomy as women, and the clothes that we wear every day represent a declaration of choice. Every time that we choose to wear something that celebrates our bodies, we're also embodying our power as women to make those decisions. But the incredibly important thing that so many seem to miss is that the way we as women dress can be sexy without it being an invitation. The way we dress as women doesn't mean we're "asking for it." The way we dress as women is a symbol of our body autonomy and does not send a request for someone to take that away.

In the wake of all of the sexual harassment and assault accusations against Harvey Weinstein (all allegations of non-consensual sex have been denied by Weinstein's spokesperson), this statement feels more important now more than ever. Not just in reminding people that the same control that we wield over our sense of style should extend to our sexual autonomy, but also in reminding them that our style of dress shouldn't be used as an excuse for crimes committed against us either. At no point is anyone's dress sense a direct invitation for sex, nor does it provide outright consent to be touched.

We shouldn't have to remind anyone of that, but here we are, with campaigns like #MeToo making it very clear that we're in still in need of these statements. So, to see Blanchett take center stage, and reaffirm that message isn't just emboldening. It's also taking that sentence — one that has likely rolled around your head on more than one occasion and maybe failed to come out of your mouth from fear or exhaustion — and giving it loud life.

Hopefully, if we all keep pushing the sentence to the center stage of our own lives, then the men who need to hear it may finally get the message.

More like this
At 28, Melanie C Was Falling In Love & Reclaiming Her Confidence
By Olivia-Anne Cleary
Help! I'm Not Getting Any Attention On Dating Apps. What Can I Do?
By Sophia Benoit
Megan Rapinoe's Relaxation Hack Is Super Dreamy
By Carolyn Steber
Everything To Know About Taylor Swift’s 10th Studio Album, 'Midnights'
By Grace Wehniainen and Jake Viswanath
Get Even More From Bustle — Sign Up For The Newsletter