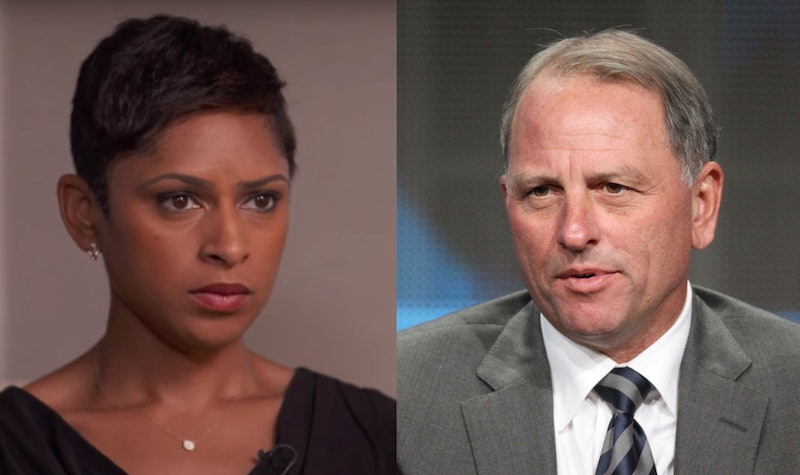 Over the past year, three of CBS' top executives have left the network in the wake of sexual misconduct allegations. The latest instance occurred just this week, when 60 Minutes executive producer Jeff Fager, who had been a CBS employee for 36 years, was fired for sending a threatening message to a reporter. On air this Wednesday, CBS reporter Jericka Duncan revealed the text Fager sent her after she asked for his response to sexual harassment allegations made against him.

"I am that reporter," Duncan said on CBS Evening News on Wednesday, revealing her identity as the reporter involved in the Fager termination story for the first time since the news broke. "Since Jeff Fager publicly referred to our exchange today, I want to be transparent about it."

Duncan explained that she had contacted Fager on Sunday to ask him to comment on a series of sexual misconduct allegations that recently came out against him in The New Yorker (all of which he has denied). He texted her back the following message, which she shared on air:

The president of CBS News announced on Wednesday that he fired Fager because he had violated company policy. In a memo to employees, he noted that the termination was "not directly related" to the sexual misconduct allegations published in The New Yorker. Shortly afterward, Fager himself put out a statement saying that he'd been fired because of the text he'd sent "to one of our own CBS reporters demanding that she be fair in covering the story."

"My language was harsh and, despite the fact that journalists receive harsh demands for fairness all the time, CBS did not like it," Fager said in his statement to CNN. "One such note should not result in termination after 36 years, but it did."

At least one CBS employee has publicly implied that they support the network's decision to dismiss Fager. Evening News anchor Jeff Glor addressed Duncan during his show on Wednesday and said that her work to cover the Fager misconduct allegations has been "difficult enough without dealing with this." He told Duncan, "That message was unacceptable. I think it's important for you to know — for everyone to know back there — that [...] the entire team at Evening News supports you 100 percent."

Another allegation was added to the list this week when the magazine updated the story on Sunday to include a new claim about Fager. Sarah Johansen said that Fager had groped her at a work event when she was a CBS intern a decade ago. "All of a sudden, I felt a hand on my *ss," she said of her experience at the party. "The hand belonged to an arm, which belonged to Jeff Fager." She added that a producer told her many people had experienced his groping and referred to his wandering hand as "the Fager arm."

In response to Johansen's allegations, Fager told CBS, "This is an outrageous claim and it didn't happen. It is wrong." Regardless, he is now looking for another job, as Duncan announced on Wednesday that the network is seeking a new executive producer for 60 Minutes.