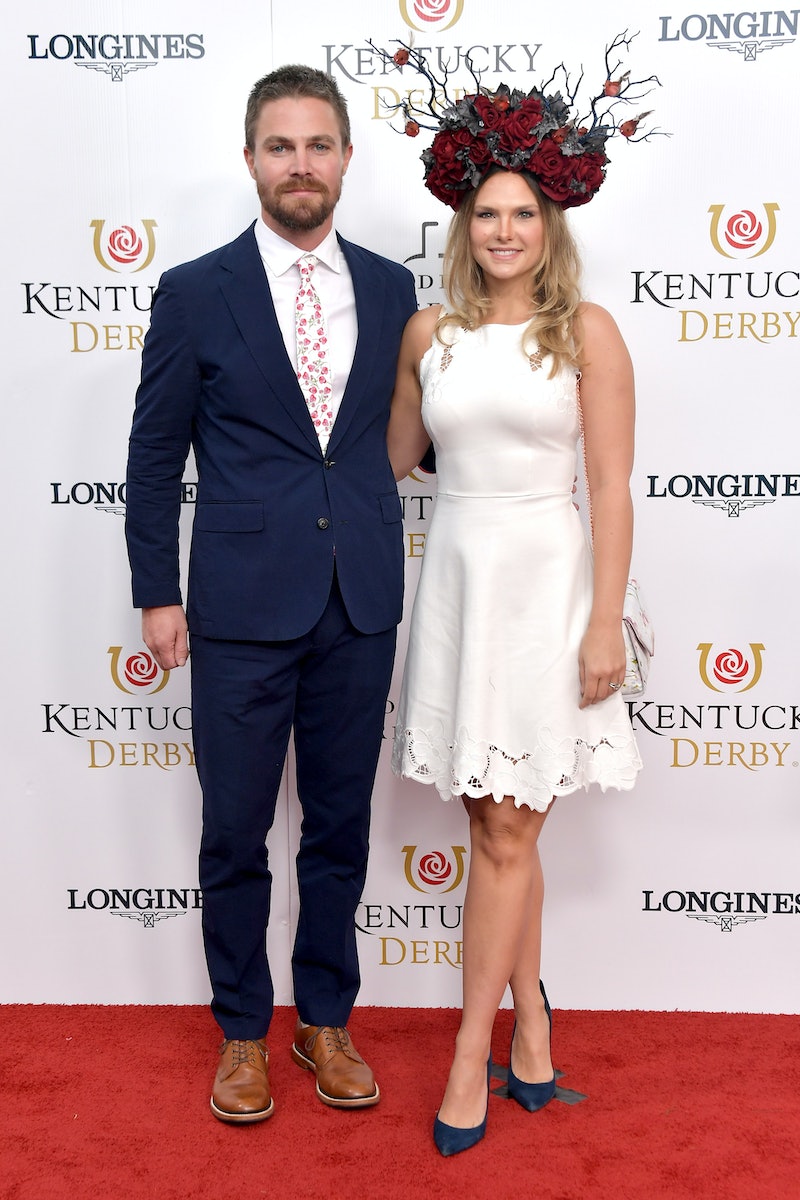 It's off to the races for these fashionable stars. These celebrity photos from the 2019 Kentucky Derby show that fashion is increasingly one of the main attractions at this sporting event. Every year, the Kentucky Derby draws a big crowd to watch an exciting horse race which, when all is said and done, lasts only a little over two minutes. The Derby draws people from all over the country, and even celebrities enjoy coming to the state to cheer at the event. There's no official dress code for the race, but floral patterns, pastels, and over-the-top headpieces are standard. This year, celebs brought their best looks for the event, sporting fancy colorful suits or dresses, and of course, spectacular hats.

On Saturday, May 4, the Kentucky Derby took place in Louisville, Kentucky. The Derby is a 145 year-old institution, as horse racing is one of the oldest American sports, according to The New York Times. The race lasts only a few minutes, but this year, there was unprecedented drama around the winning horse. The initial champion Maximum Security was disqualified after a complaint revealed he had interfered with other horses going around the final turn of the race. For the first time, the winning horse was disqualified, and runner-up Country House took the title. Despite the drama, the guests at the events seemed to have a grand time, and certainly brought the dramatic looks fans have come to love.

Patriots quarterback Tom Brady posted a group photo from the Kentucky Derby on Twitter. In the photo, the group show off their colorful suit wear, and the football player wrote, "*Insert gif of me yelling Let's Go below*."

Kevin Richardson, best known for being a member of the Backstreet Boys, posted a photo posing with his wife Kristin Richardson and friends Tara Nicole Hughes and David Alan Grier on Instagram. The caption read, "We are up in HYERRRRR! Love hangin w some LA tribe in my home state! #kentuckyderby #bluegrassstateofmind #kentuckyproud."

Arrow star Stephen Amell posted a photo with his wife Cassandra Jean on Instagram, poking fun at her elaborate headpiece. The actor wrote, "Big Ups to my wife for dressing up like Godswood this year."

The Real Housewives of Atlanta star Phaedra Parks shared a photo of her Kentucky Derby look on Instagram. In addition to her colorful dress, she also had a floral headpiece, and captioned the photo of her outfit, "#Kentucky let's go #kentuckyderby time #trifectagala" with a horse emoji.

Former Destiny's Child singer Michelle Williams also showed off her Kentucky Derby style. The star had never been to the event before, and posted a photo of her floral dress with a matching hat on Instagram, writing, "My first @kentuckyderby! Thank you @thehatgirls for my fabulous hat! Thank you @abjcolemanand @trifectagala for the invitation!"

Wilmer Valderrama shared a series of photos from his weekend at the Derby on Instagram, showing off his colorful suits. The actor wrote, "Boys trip with the baddest team in the game, Day 1 of the #KentuckyDerby down..#KentuckyOaks."

NeNe Leakes shared a photo of her vibrant outfit on Twitter, writing simply "Kentucky Derby." The Real Housewives star paired a bright yellow dress with a floral fascinator and veil for her standout look.

This year's Kentucky Derby may have had an unconventional winner, but that didn't stop the stars from making the most of the glamorous weekend. As per usual, the celebrities brought their best pastel looks and fancy hats, and it appears the weekend was a success from their social media updates. Guests may arrive at the race to see the horses, but the incredible celebrity styles are becoming an event of their own.