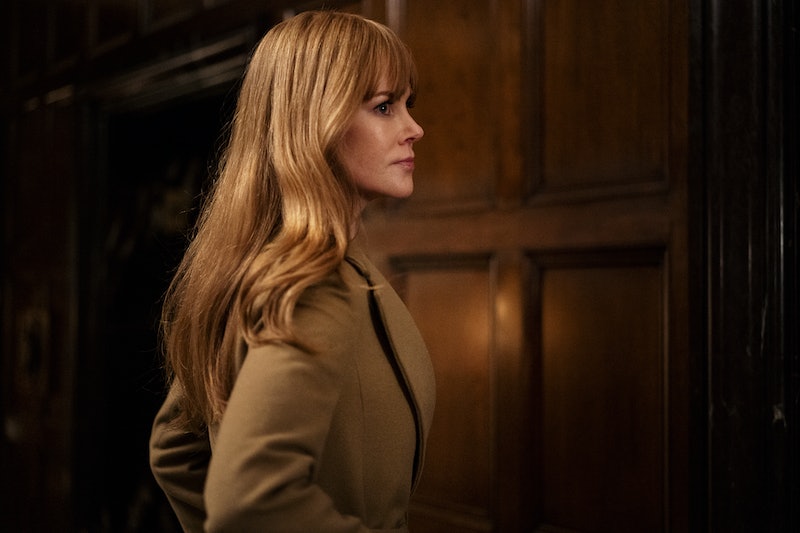 Spoilers ahead for Big Little Lies Season 2, Episode 6. When Celeste takes the stand in Big Little Lies' July 14 episode, no aspect of her life is off limits. Her personal life, past abuse, and mental stability are all on trial — as, in subtler ways, the other mothers in Big Little Lies have been on trial all season. Not literally — though given the circumstances of Perry's death, they certainly could be — but in whether they are "good" or "bad" mothers, and who, exactly, gets to define which one they are.

Whereas the first season focused on the Monterey Five's personal trauma and turmoil, the second has shown their children's pain, too. We saw before that the Wright twins mirrored Perry's behavior by choking and biting Amabella, but Season 2 has amplified this: when they, along with Ziggy, attack a schoolyard bully, their physicality closely resembles a Season 1 scene of Perry kicking Celeste on the ground. And when Celeste separates the fighting twins in an earlier episode, she yells, "You will not be like him."

But it's not just the Wright children who are affected by their parents. Renata's anxiety is manifested in Amabella's panic attack, which a child therapist confirms is at least partially due to concern over her mother's emotional state. Madeline admits that her affair was prompted in part by seeing her father cheat on her mother. And Bonnie, in her poignant bedside speech, directly links killing Perry to the violence and anger her mother inflicted on her as a child — and the building resentment she's held toward her because of it.

"I resent you for the childhood I had. I resent you for your impatience. For slapping me. For all the bruises," she tells her mom. "Mainly, I resent you for killing a man. I killed Celeste's husband. He didn’t slip. I pushed him. I snapped — and when I lunged at him, I was pushing you. And that push was a long time coming."

Though abuse would inarguably be classified as bad parenting, Bonnie's relationship with her mom isn't that cut and dried. Things between them are tense and silently toxic, and yet often, still caring. Similarly, Celeste is questioned in court about behaviors that, considered alone, could convey questionable judgment or even neglect: that she's been self-medicating with Ambien, blacking out, and having reckless, violent sex with strangers; that she admittedly "overreacted" twice and hit her sons; that she also slapped Mary Louise. In the prosecution's eyes, even that she chose to stay with Perry all those years is considered suspect.

Neither Celeste nor Bonnie are themselves the abusers, and it's very clear how much all of the women on the show love their children, but by paralleling the kids' struggles — young and old — with their mothers', we're encouraged to consider the connection between the two. Mary Louise may be the only one verbally questioning Celeste's capabilities as a mother, but the show is casting doubt upon each one of them.

That's not to say Big Little Lies is suggesting any of the Monterey Five are bad moms; only Mary Louise has done that, and the irony of her passing judgment when she raised a man like Perry is not lost. But for as much as Mary Louise is overstepping with Celeste, Bonnie is shown as desperate for someone to have stepped in more. So, at what point does a mother's "impatience" or occasional outbursts cross a line? When does a struggling mother go from having a hard time to outright damaging, whether to herself or to her kids? And whose place is it to intervene if she does?

As usual, Big Little Lies is asking big questions with no clear answer — and asking us to sit in that discomfort.

More like this
Netflix Shut Down 'Bridgerton' S3 Rumours About A “Very Dark” Storyline
By Bustle
Shonda Rhimes Responded To The Surprise Exit Of A Day 1 'Grey's Anatomy' Figure
By Grace Wehniainen
'Succession' Season 4 Will Be An "Absolute Banger" According To Cousin Greg
By Bustle Staff
Taylor Swift Visited The 'Glee' Set For This Bizarre Season 5 Episode
By Grace Wehniainen
Get Even More From Bustle — Sign Up For The Newsletter
From hair trends to relationship advice, our daily newsletter has everything you need to sound like a person who’s on TikTok, even if you aren’t.