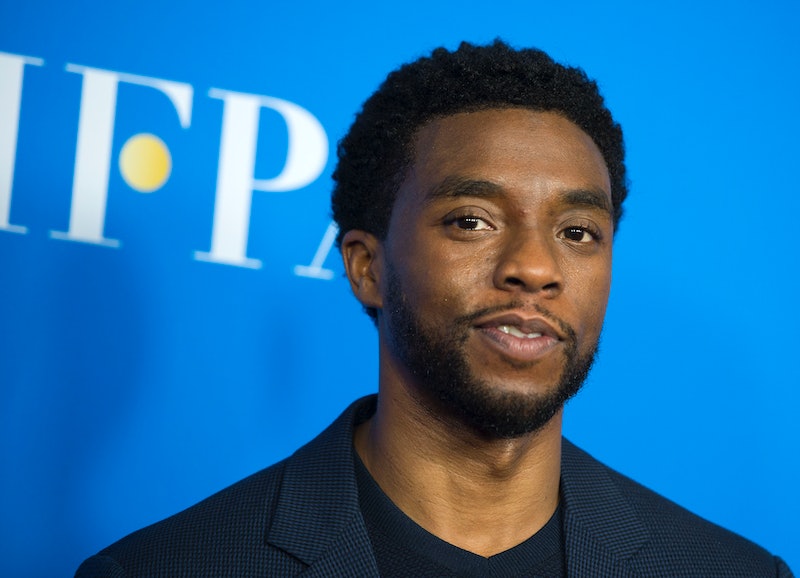 Throughout Hollywood's history, biopics about important figures have been a major way of bringing American stories to life. In recent years, there's been a push for more and more biopics about Black people, like 42, The Great Debaters, The Butler, Selma, and, most recently, Marshall, starring Chadwick Boseman. There's no question that the proliferation of Black biopics is a great way of getting more Black actors involved in cinema and adding diversity to film. But there's a serious problem when the same Black actors get cast again and again in biopics, without getting work in movies about fictional Black characters, too.

Practically every time there's a new biopic about a Black man, it seems that Boseman is attached. After starting out his career with small roles on Law and Order, Justified, and Fringe, Boseman has gotten famous in recent years, thanks largely to his role as Black Panther in the Marvel Cinematic Universe. But he's also constantly in biopics, having taken on the roles of Jackie Robinson, James Brown, and now Thurgood Marshall in the new film Marshall.

And other Black actors have fared similarity, with David Oyelowo in Selma, United Kingdom, Queen of Katwe, and The Butler; Angela Bassett in What's Love Got To With It; Katherine Jackson in The Jacksons: An American Dream Movie; and Betty Shabazz in Malcolm X and Panther. Will Smith, Chiwetel Ejiofor, and Denzel Washington have also been actors used in Hollywood's rotation for biopics consistently, as well. So what gives?

In an interview with Entertainment Weekly, Boseman addressed his frequent casting in biopics of Black figures. "All of them were different situations...It’s not like I’m necessarily looking for important Black figures. Like James Brown, it just kept calling me at a certain point when I saying no; it was like James Brown was calling me himself. And Jackie Robinson, there was no way in the world I wasn’t going to do that. So, it was sought after not just by me but by a lot of people. They all were a little bit different in how they came to me," says the actor.

This may be true, but for some audiences, it's frustrating to see Black actors cast so often in biopics when fictional movies about black men and women are so rarely made. Yes, it's true biopics can be successful — Hidden Figures, according to Forbes, was made on a $25 million budget and earned $233.4 million, while 2013's Jackie Robinson biopic, 42, brought in $95 million on a $40 million budget and The Butler made $116 million on a $30 million budget — but so can fictional movies, as the success of Get Out, for instance, shows. And while making Black biopics on occasion is totally fine, Hollywood needs to support the creation of stories in all different genres that star a range of Black actors, too.

Biopics are certainly one way to get more Black stories told, but they aren't the only narratives that accurately display minority life. Having a plethora of movies about both historical figures and contemporary roles could see every side of the Black experience getting explored on-screen, and give talented actors the ability to take on many different kinds of parts. Currently, Black actors aren't given worthy roles often enough; even after winning an Oscar in 2012, Octavia Spencer, for instance, told The Daily Beast that she's struggled to win leading parts. "There are so few roles out there," she said. "And even if it is a film that could be led by a Black actress, how many times is that film going to get funded? Let's just be real."

Actors like Boseman, Ejiofor, Spencer and more deserve to be given more film opportunities, and so do actors that aren't already famous. A few Black actors like Michael B. Jordan and John Boyega have gained notice in recent years, but there needs to be more. And even they have taken on biopics and historical films, with Jordan in Fruitvale Station and Boyega in Detroit. In an interview with Entertainment Weekly, Idris Elba (who starred in the biopic Mandela: Long Walk to Freedom) stated that the industry lacks imagination for roles in regards to people of color. "I was busy, I was getting lots of work, but I realized I could only play so many ‘best friends’ or ‘gang leaders,’" Elba recalled of his early years. "I knew I wasn’t going to land a lead role. I knew there wasn’t enough imagination in the industry for me to be seen as a lead."

Multidimensional roles for Black actors are badly needed, in order to properly show what Black life experience is and break stereotypes. Yes, biopics can sometimes be helpful in showcasing issues Black people have faced historically, but that can't be the only kind of Black stories we get. Our lives aren't one dimensional, and to understand the community means that Hollywood needs to explore our everyday lives in addition to those of historical figures.

And it's not like these movies wouldn't sell. Every year for the past half-decade, the average White American has bought a ticket to fewer films than the average Black, Hispanic or Asian moviegoer, according to the Motion Picture Association of America. So why aren't there more films reflecting diverse audiences' lives? As a Black consumer myself, I know just how much we want to see diversity on-screen. And films that are not in the slavery and biopic genres, like Black Panther, Get Out, and Moonlight, have shown the importance and success of showing different sides of Black acting and the Black experience. White people get plenty of movies about their many different lifestyles and identities; it's time for Black people to get the same treatment.

Both familiar and new Black actors deserve to get cast in many different types of roles, as romantic leads, CEOs, superheroes, and regular everyday people living the Black experience. We don't need to see the same Black actor play yet another distinguished Black icon from American history, without that person also getting the chance to play a fictional character showing a different part of the Black experience.

In short, it’s not that Hollywood shouldn’t ever make biopics about or emphasizing Black history; it’s just that there’s so much more to the Black experience than the past, and the stories of our lives today are worth exploring on-screen just as much.