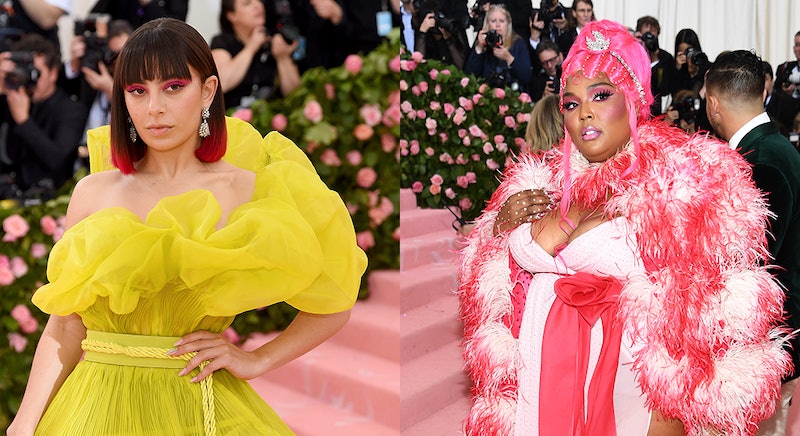 It's Charli and Lizzo, baby, and they're here with a sorry, not sorry jam to get your summer started a little earlier than usual. No doubt, Charli XCX and Lizzo's new song "Blame It On Your Love" is a very premature contender for song of the summer. Especially, for anyone who plans to have a summer so fun they feel like they should apologize for it. But, it's also doing the trick right now for anyone who thinks the best way to say "I'm sorry" is with an undeniably unapologetic bop.

This song may sound familiar to Charli's angels. The track, produced by Stargate, includes the main hook from "Track 10" off her 2017 Pop 2 mixtape in which she repeats, "Every time I f*ck it up/ I blame it on your love, I do." Simply titled by its track number, Charli always considered it an unfinished jam. Finally, she figured out a way to turn that handclap beat of "Track 10" into something more complete.

To add a little juice to that futuristic beat from the past, she recruited Lizzo to lay down a few rhymes. Unlike Charli, though, Lizzo seems to think love really does mean never having to say you're sorry. Instead, of apologizing to the ex she hurt, Lizzo thinks Charli should blame them. “I'm tryna catch millions," she raps. "I ain't tryna catch feelings, b*tch." And that's the tea, courtesy of Lizzo who has no sympathy for broken hearts. In her opinion, that's just the way love goes.

That no holds barred take on love might be why Charli knew she needed Lizzo on this track. "IMAGINE IF I MADE A SONG WITH @LIZZO AKA THE QUEEN OF EVERYTHING - WOULD U DIE???" Charli tweeted on Monday, May 13. "I WOULD DIEEEEEEEE!!! PREP MY GRAVE ASAP WE GOT A BOP COMING THIS WEEK."

She didn't disappoint. In fact, it makes that recent photo of Charli and Lizzo in which the latter is holding a purse with the words "Bout 2 Save Pop Music" on it, seem rather prophetic, don't you think?

Lizzo has certainly been doing her part with her latest album, Cuz I Love You, which is the feel-good record of the year. One she'll be touring behind for the rest of it. The record's so good that you'll be using Lizzo's body positive lyrics as your Instagram captions for a long time to come.

If you needed more proof that this is the year of Lizzo, she's also making her live-action acting debut in Hustlers alongside Jennifer Lopez, Cardi B, Crazy Rich Asians' Constance Wu, and Riverdale's Lili Reinhart.

As for Charli, she's got plans of her own. Along with her latest song — her first since last year's "1999" with Troye Sivan — she also announced a new one-day Go West Fest music festival that will feature a lineup of LGBTQ stars. According to Pitchfork, the June 9 fest, which she is putting on with Sivan, will include Pussy Riot, Allie X, Dorian Electra, and Leland with a portion of the event’s proceeds going to GLAAD.

So, maybe 2019 should be the year of Lizzo and Charli. And oh look, we already have a theme song.