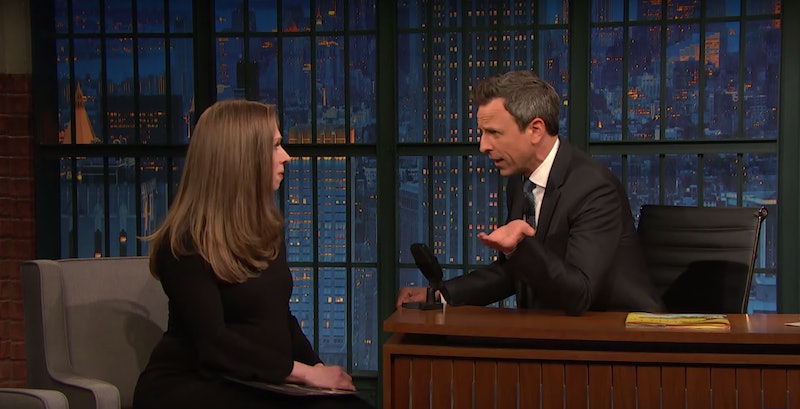 As the daughter of the 2016 Democratic nominee, Chelsea Clinton has certainly been on the receiving end of a fair amount of derision and outright abuse from supporters of President Donald Trump. In her interview on Late Night with Seth Meyers, though, the former first daughter was far more concerned about other issues. Chelsea Clinton said "new levels of cruelty" are what make Trump's presidency so shocking, and her worries reach beyond the headline-grabbing White House policies that you've probably heard about the most.

Clinton expressed her fears over the administration's actions towards endangered animals — a subject that she's written a children's book about. Don't Let Them Disappear introduces kids to numerous endangered animals around the globe, and Clinton's been making stops at zoos as part of her book tour.

"I think that a lot of people don't know how much the Trump administration has done to roll back protections for endangered species," Clinton told Meyers.

She then listed many of the administration's efforts — including allowing hunters to bring lion and elephant trophies back into the United States, working to allow oil drilling in the Arctic National Wildlife Refuge, and attempting to make it legal to hunt grizzly bears in Yellowstone National Park.

"They're really pushing back on endangered species wherever they can," Clinton said.

Meyers then went on to ask Clinton about how she, as someone who had experienced the full spectrum of life in the White House, regarded the constant levels of chaos that seem to emanate from this one.

"Are you constantly taken aback, however, by exactly how chaotic this [White House] seems?" Meyers asked Clinton.

"Yes, and by the new levels of cruelty that this administration seems to find," Clinton answered. "Whether it's with the children being separated from their families at the border, or it's with the Endangered Species Act, which had never really been controversial before."

After all, the Endangered Species Act was a popular proposal championed by President Richard Nixon, as Clinton explained. It was successful in increasing the population numbers of endangered species and protecting their fragile habitats.

"And yet, Trump has made this controversial too," Clinton said. She and Meyers also mentioned what they considered a possible motive behind Trump's efforts to allow more access to endangered species — the fact that Trump's sons, Donald Trump Jr. and Eric Trump, like to hunt.

Clinton and Meyers then briefly switched over to the news network where Clinton and her family receive a substantial amount of coverage: Fox News. Meyers wondered if the Clintons followed the network's continued focus on them — or, as Clinton put it, how she and her family "live rent free in their heads."

"If they're still obsessing about my mother's walking in the woods, and it allows Democrats to actually try to stop bad things from happening and make progress elsewhere, like, I can live with that," Clinton said. "But I do sometimes wonder, like, if my mother weren't here ... what would they talk about?"