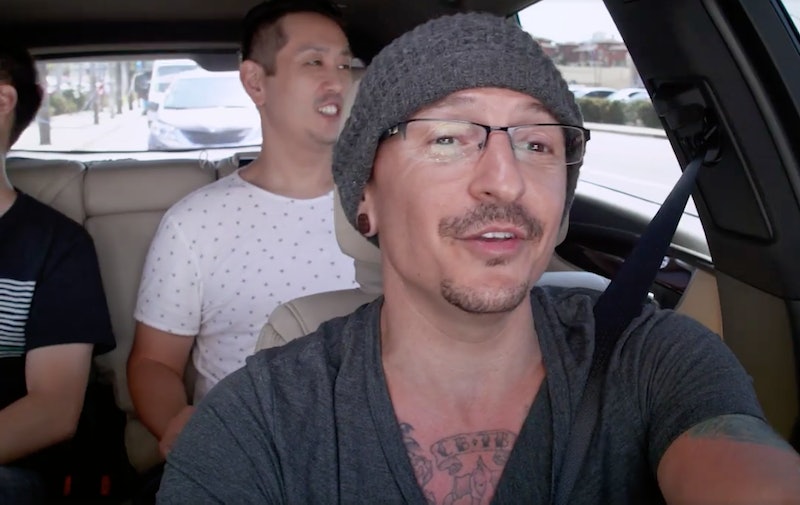 It's been a bleak year for fans of Linkin Park, but former frontman Chester Bennington's Carpool Karaoke episode is exactly the way they should remember him. The Apple Music series, which originated on The Late Late Show With James Corden, filmed an episode with Bennington earlier this year, and it's so wonderful. In the 23-minute clip, Bennington was behind the wheel, Linkin Park members Mike Shinoda and Joe Hahn were in the back, and comedian Ken Jeong rode shotgun. Yes, that Ken Jeong; the guy from The Hangover series, Community, and the amazingly deadpan doctor from the end of Knocked Up. How Carpool Karaoke got them all together — and why — is anyone's guess. But it's easy to see what an amazing time the group had.

As seen in the clip, Bennington was smiling and joking around with his bandmates. He allowed Jeong to rename the band Lin-ken Park (get it?) and suggested Jeong adapt the stage name Park to really make it his own project. Hahn was mostly quiet, cheerfully singing along to the tunes, and Jeong and Shinoda almost immediately developed a faux feud. It's all as heartwarming as it is heartbreaking to watch, honestly.(Bennington passed away from an apparent suicide less than a week after the episode was filmed in July 2017.)

From the beginning of the Carpool Karaoke episode, the music choices are amazing. Whoever picked out "Hey Ya" by Outkast, great job; the four dudes jammed out to it (and hit the high notes) in a way that's impossible to forget. Immediately after, the tone shifted somewhat; Jeong put on Linkin Park hit "Numb" and the band got really into it. As Jeong headbanged slightly out of rhythm, Bennington sang along to the band's 2003 smash. Shinoda backed him up. For even the casual fan, this is meaningful. To see the three of them hanging out together, taping a show, not taking themselves too seriously — it's difficult to grasp that the world would lose Bennington so soon after.

During a pause in music, they discussed the lead singer's signature scream. Shout? Yell? Whatever the right term is, if you've heard a Linkin Park song in the last 20 years, you know the one. Bennington attempted to teach the self-described "dim-witted, middle-aged Asian man" in his passenger seat how to replicate it, to moderate success. Soon after, they rocked out to another Linkin Park classic: 2000's "In The End." Bennington's voice was as gripping, lovely, and emotive as ever; he appeared unbothered by Jeong's slightly harsher take on the song. By time the car pulled over to allow an '80s-style dance break, you probably fell in love with the crew all over again.

This episode — filmed less than a week before his death — also serves as a reminder that it can often be virtually impossible to see what a person is going through from the outside looking in. Bennington passed away earlier in 2017, a victim of suicide. The Linkin Park frontman had long been open with fans about his struggles with drug abuse and mental illness. For many, the loss of Bennington was devastating. It eases the pain of loss, just a little, to see him in this video, doing so much of what he loved. He was smiling and laughing and goofing around, singing along to his own music and keeping up with a weirdo comedian like Jeong.

In the Carpool Karaoke video posted to Linkin Park's Facebook page, the episode opened with a statement that the musician's friends, family, and band members had all agreed to air the episode. They dedicated it to Bennington's memory. TMZ reports that Corden, who produces the series, confirmed that the singer's family had the "final say" over the episode's airing. Though it's natural to mourn Bennington's passing, even months after the fact, it's encouraging that those closest to him hope fans remember him in this positive light.

More like this
Kate Bush Revealed The Real Meaning Behind 'Running Up That Hill' Lyrics
By Darshita Goyal
'School Of Rock' Changed Joe Keery's Life Forever
By Alyssa Lapid
Everything To Know About Taylor Swift’s 10th Studio Album, 'Midnights'
By Grace Wehniainen and Jake Viswanath
Is Dua Lipa Dating Trevor Noah? New Photos Show Them Kissing & Hugging
By Brian Anthony Hernandez and Martha Sorren
Get Even More From Bustle — Sign Up For The Newsletter