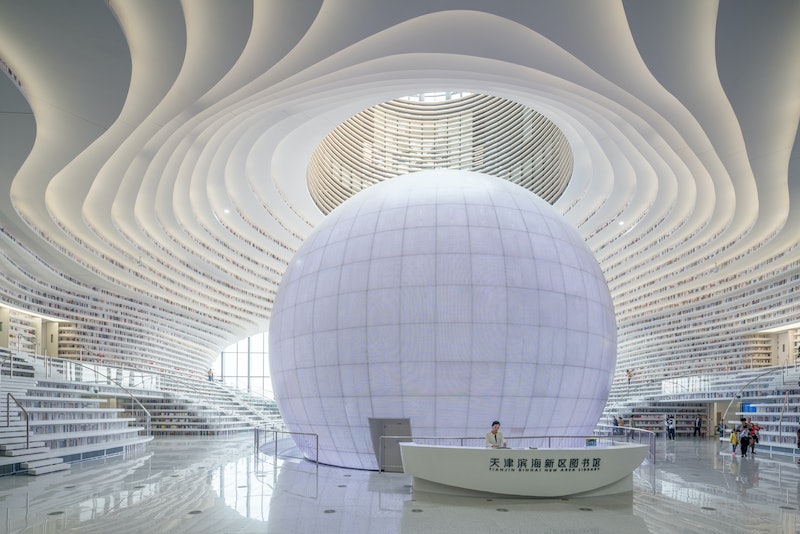 Certain cities like London, New York, and Paris have always been hotspots for literary tourism, but once book-lovers find out about China's most recent bookish wonder, they are going to want to add this new library to their bucket lists. Featuring a cascade of floor-to-ceiling shelving, multiple media rooms, two rooftop patios, and enough space for 1.2 million books, this Tianjin treasure will make you want pack your bags and hop on the next flight to Beijing.

Opened in October, this massive 36,000 square foot library opened is located in the center of Tianjin Binhai coastal region outside of Beijing. Nicknamed "The Eye of Binhai," the library is built around a giant mirrored spherical auditorium that stands several stories high in the center of the bright but cavernous space. Surrounded on nearly all sides by curved and layered bookshelves that also serve as stairs and seating for visitors, the stunning structure was designed to look like the inside of a human eyeball, and walking around inside of it will make visitors feel like they are exploring exactly that.

According to a press release from the project's leader, Dutch design firm MVRDV, the auditorium at the center of the building is key to both its design and its theme. "Not being able to touch the building’s volume we ‘rolled’ the ball shaped auditorium demanded by the brief into the building and the building simply made space for it, as a ‘hug’ between media and knowledge” said MVRDV co-founder Winy Maas about the library's unique space.

A truly amazing architectural feat, the Tianjin Binhai library rises five stories high. On the bottom two floors hidden behind shelf after swirling shelf of books, visitors will find plenty of reading rooms and quiet lounges to choose from. The upper three floors offer a number of interesting amenities, including audio and media rooms, meeting spaces, offices, computer labs and other educational facilities. To top it all off, the library also boasts two rooftop patios so readers can enjoy their books in the fresh air.

While the cutting edge media labs and the unique addition of an outdoor reading space are certainly enviable, the thing that makes the Tianjin Binhai library truly special is same thing that makes every library special: its bookshelves. Unlike the traditional stacks you would find at any local library, Tianjin's new books center features layer after layer of terraced shelves that create a kind of cascading effect readers can fully interact with. As you look around the inside of the space, it almost appears like they meld together into one continuous shelf, something the designers intended. In the Tianjin Binhai library, the shelves aren't just for holding books either: they're meant for walking, stepping, sitting, laying, and exploring.

I don't know about your hometown library, but mine has nothing on this dazzling house of books.

Built in just three years, the library's construction was commissioned by the Tianjin Binhai Municipality as part of a larger cluster of five cultural buildings. The structure sits between the city's cultural district and a local park, and its location was meant to be the literal and symbolic bridge between urban life and nature. The building's design and construction was headed by Netherlands-based architecture and urban design firm MVRDV and done in collaboration with local architects from the Tianjin Urban Planning and Design Institute.

Futuristic in appearance, this modern library honors a timeless hobby: reading. Its awe-inspiring design and the atmosphere it creates is like a dream come true for bibliophiles who want to do nothing more than get lost in a good story all day. With shelf space for over a million books, there are plenty of chances for readers who visit to do just that.

This breathtaking structure might be brand spanking new, but it can already be counted among the world's most beautiful libraries, according to this book-lover anyways. The only question is, when will you be visiting and what will you read there first?

More like this
You Can Stay At The 'Hocus Pocus' House On Airbnb
By Alexis Morillo
Craving The Beach? Here's Your Guide To A Solo Vacation In Turks & Caicos
By Alexis Morillo
The 7 Best Laptop Stands For Zoom Meetings
By Megan Gray
20 Smart Devices Under $35 That’ll Change The Entire Vibe Of Your Home
By Emma Carey
Get Even More From Bustle — Sign Up For The Newsletter