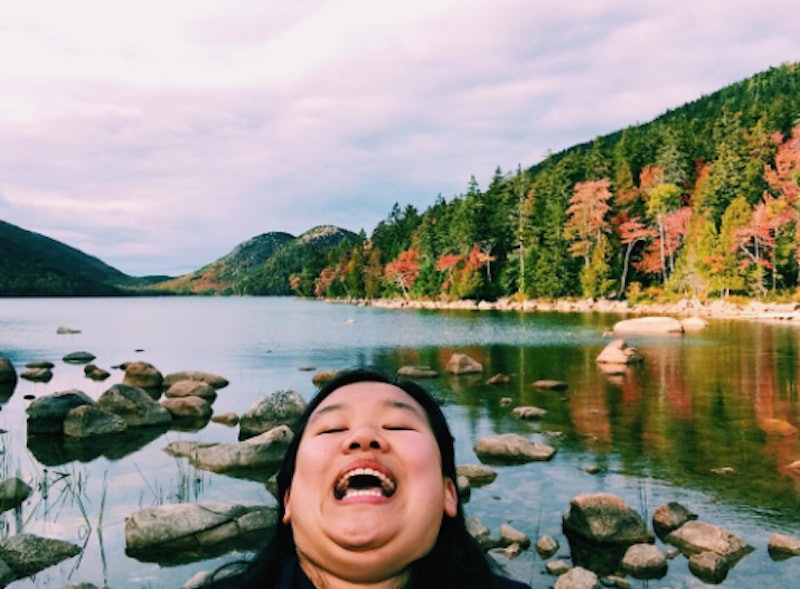 Michelle Liu has "chinned" in the middle of Times Square, at the London Eye, and even in front of the Eiffel Tower. Thanks in part to this world traveler, "chinning selfies," which Liu created to fight society's beauty standards, are taking over. But they may not be as radical as they seem.

Liu, a college student that documents her travels with "chinfies," purposefully posts self-proclaimed unflattering selfies to her aptly named @Chinvenures Instagram account. It doesn't matter if she's is in her own Boston stomping grounds or abroad. A visit to any destination is an opportunity to position her camera at a low angle, tilt her head back, and grimace to create a double chin effect in front of whatever iconic monument is in the background. Liu has "chinned" everywhere from Prauge to Beijing to Amsterdam.

These aren't your average, high-angled, perfectly posed selfies — and that's exactly the point. Liu says the photos are meant to make a statement against the type of selfie perfection that is all over social media. But the concept of "chinning," however, may actually perpetuate the same beauty standards Liu is hoping to shatter.

Liu is definitely no stranger to taking these unusual selfies. According to an interview with Mic, she's been doing it since her middle school days. What began as a joke to entertain her friends has now turned into a viral sensation, garnering Liu over 20K followers on Instagram.

Lui tells Mic that taking "chinning" photos was her way of getting comfortable in her own skin. Though she constantly felt pressure to "look a certain way" throughout middle school, she overcame her insecurities by embracing her quirky side.

Now, Liu even gets others to join in and get "silly" with her, like this British Airways flight crew that jumped in for a squad 'chinfie'.

It's supposed to be all fun and games whenever "chinning" is involved. But it's that nonchalant attitude toward posing with a forced double chin that becomes problematic.

In an age where apps and filters exist to alter our faces and bodies until they're "perfect," it's refreshing to see photos that don't meet society's typical standard of beauty. And there's definitely nothing wrong with embracing your quirky side and challenging beauty standards.

However, "chinning" may actually promote society's harmful beauty standards by poking fun at those who actually have double chins, deeming them outside of the realm of beauty. When you think about the concept of "chinning," or taking a purposefully "unattractive photo," it's really just fat shaming in a light disguise.

After all, real double chins do exist. And people who have them don't deserve to be mocked as unattractive.

Lui tells Bustle that the intention of "chinning" was never to harm or shame anyone. She says the critique of "chinning" as negative is surprising and disappointing.

"While I can see where this may be coming from, there was not a single moment in my journey where I thought 'chinning' would end up shaming others," she says. "I started chinning as my outlet to have fun and embrace my differences, and to think that it could possibly shame others is not my intention whatsoever. If anything, I want chinning to be a way to defy those high standards and to encourage everyone to be comfortable with themselves."

What the "chinning" Instagram trend attempts to do is take something society typically views as flawed and post it ironically to break up the selfie perfection of the internet. But the suggestion of the photos still feeds into the idea that double chins are grotesque and any photo featuring them is unworthy of dozens of "likes." But who's to say that a real double chin can't be beautiful?

Liu's intended effort to banish insecurities are certainly commendable, and fat shaming is likely not the message she aims to promote with her "entertaining" selfies. But maybe — just maybe — "chinning" is a trend that is better rethought and reimagined. Perhaps there is a better way to challenge beauty standards.

It's OK to not take yourself too seriously when snapping flicks for the 'gram. And it's more than OK to work to take down harmful beauty standards. Just make sure you aren't unintentionally shaming others in the process.

More like this
Doja Cat Took On Paris Fashion Week In Head-To-Toe Gold Body Paint
By Audrey Noble
13 Memorable Beauty Moments From Paris Fashion Week S/S 2023
By Olivia Rose Ferreiro
Everything To Know About Daxxify, The Newest FDA-Approved Skin-Jectable
By Olivia Rose Ferreiro
This Week’s New Makeup Releases & More Beauty Headlines
By Audrey Noble
Get Even More From Bustle — Sign Up For The Newsletter