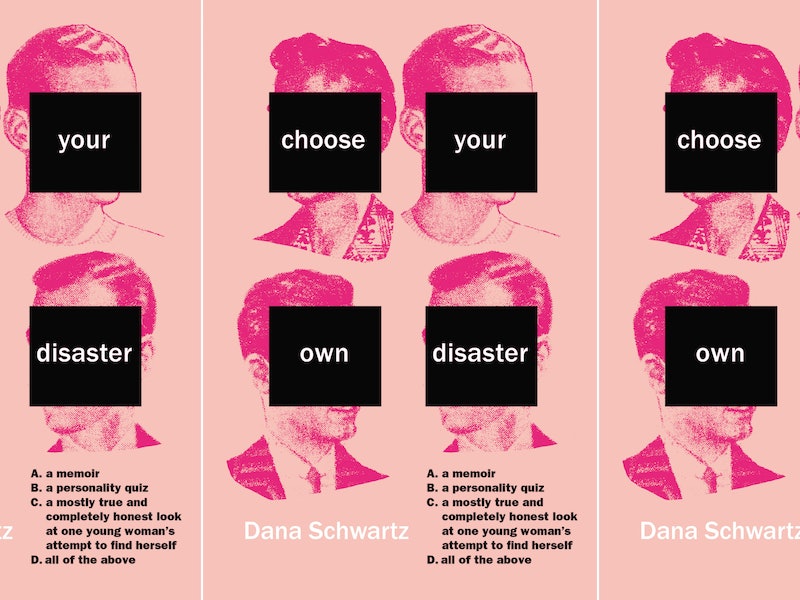 If I am perfectly honest with myself, the number of online quizzes, personality tests, Hogwarts House sortings and "Which Disney Princess Are You Really?" surveys I have taken would probably number into the high hundreds. And if you're anything like me, you've whiled away an hour here and there in the quizzes page on Buzzfeed. Despite the title, that's not quite what Dana Schwartz does in her new book, Choose Your Own Disaster, out now. What she does, do though, is use that personality test framework as a way to poignantly revisit all of the "disasters" she somehow made it through in her 20s.

Choose Your Own Disaster explores just how difficult it can be to make the life you want where there are so many possible versions of yourself to be. Schwartz, like the rest of us, may still be figuring out exactly who she is. But somehow knowing that she's a Carrie, a Ravenclaw, a Raphael, a Belle, a former emo kid, a Twitter addict, and a millennial just trying her best, makes life seem a little bit more do-able. And as a Miranda, a Gryffindor, a Leonardo, and a Cinderella (apparently), I totally get it.

If you just can't wait to snag a copy of your own before you dive into Choose Your Own Disaster, check out the excerpt below. It's all about a one very strange date to a guy's family coffin factory — and if the hilarity and openness with which Schwartz writes it is any indication, you're going to want to move this book up to the top of your summer TBR immediately.

Choose Your Own Disaster by Dana Schwartz, $12, Amazon

Choose Your Own Disaster

You and The Lawyer are taking a trip to Home Depot for wood so he can build a bookshelf. Yes, you are dating a boy in New York City who has a job as a lawyer, a doorman apartment, and a six-pack, and he builds furniture. He is a walking pro list. On the subway to where he keeps his car, he wraps his arms around you and kisses your face. The two of you are talking about trips.

“I’m so jealous of everyone on my Facebook feed going to Harry Potter World in Orlando,” you say. The subway rattles and he tightens his arm around you.

“You want to go down there, take a trip to Disney World?” he says. “We should do that sometime.”

“Really?” you ask. “Yeah, it would be fun.” You hope other people on the subway are looking at the two of you, because you probably look so in love, like a couple that has it all figured out. (Eventually it will be these moments— the promises of trips, the home-cooked dinners, the sex that at least isn’t boring — that you replay in your head when you begin questioning whether you should be with him.)

You hope other people on the subway are looking at the two of you, because you probably look so in love, like a couple that has it all figured out.

When the two of you are in the Home Depot parking lot, he turns and says, “I think you’re the smartest girl I’ve ever dated.”

“Thank you,” you say, and it suddenly occurs to you for the first time that he makes a list of your attributes too.

You become a stereotype of a girlfriend, bored and ornery, while he’s patrolling the wood aisles of Home Depot with the energy of a caffeinated drill sergeant. As he deliberates between oak and spruce pine, comparing their relative weight and price, examining each board for knots, you feel yourself slip into what the kink community calls “a brat”— a submissive, but a submissive who acts like a needy little girl, disobeying orders and demanding attention. It’s a different flavor of BDSM relationship, and it doesn’t suit you. You’ve been aiming for “take no shit outspoken partner, half of an equal couple” but you keep sliding into “petulant child.” But maybe this is what being in a relationship is? After all, you like when he takes control, when he holds you down, when he picks you up and presses you against the wall, how manly it is that he’s picking out wood to make his own furniture. It turns you on, even as it makes you cringe outside the bedroom. Maybe you’re a bad feminist.

“Thank you,” you say, and it suddenly occurs to you for the first time that he makes a list of your attributes too.

The Lawyer manages to fit the planks he’ll use for the bookshelf in the car by angling them from the door of the backseat up through the gap between the two of you, a thin, red oak divider. You look out the window to help him back out.

“Have I brought you to the family business yet?” he asks, pulling out.

As it turns out, the Lawyer comes from money. His high-rise apartment is thanks, not to his middling legal career but to a company started by his great-grandfather, which makes caskets. He drives you deep into Brooklyn, until the buildings transform from high-rises and brownstones into squat warehouses with nondescript exteriors. You wait in the car while he unlocks the door to one of the buildings and enters.

Moments later, a garage peels open and he reenters the car to pull inside. “So are you ready for the grand tour?”

The room is the size of an airport hangar, filled with wood and the smell of sawdust. It reminds you of the massive government storage center in Raiders of the Lost Ark, if Indiana Jones had been in the business of protecting artifacts from Nazis that all happened to be empty, un-varnished coffins. You aren’t sure whether you’re allowed to touch the wood, but you can’t help yourself — you run your fingers along the rough edges of the unvarnished planks and rap your knuckles against their sides. It’s less spooky than you would’ve thought upon initially hearing the phrase “casket factory.” The panels of wood might as well be for building tables. There is no inkling of the future association with corpses, with decay, with loss, in this fluorescent cave with high ceilings and tight paths between the stacks of inert wood.

Toward the front of the room, there are a few assembled coffins, still just skeletal boxes with wooden sides and a wooden roof, with none of the silk or varnish that will be added later when it’s wheeled out to the showroom. “You want to get in?” the Lawyer asks.

You remind yourself that you are Cool Girl. Cool Girl is always game. Cool Girl is not afraid of anything, especially not afraid of a harmless wooden box. It’s a cool story, a macabre adventure out of a Tim Burton romantic comedy. Winona Ryder would totally go into the coffin. She would be super into it. You raise an eyebrow, give him a sexy sideways smile, and step gingerly inside the coffin like it’s a tiny, bobbing boat, trying to keep the wheels beneath it from sliding away.

You lie down and jokingly cross your arms over your chest like a mummy or a cartoon vampire. You grin and close your eyes. He slides the coffin’s heavy wooden cover back on.

You know he wants you to scream. It’s the same thing he wanted when he dragged that knife across your skin in bed. He wants you scared. But you’re not claustrophobic — it’s really not as bad in there are you would have guessed. Dark, yes, and quiet, but if you close your eyes, you could be lying down anywhere. You hear a creak and you know he’s putting pressure on the top of the coffin so you won’t be able to push yourself out. You wonder if he’s getting impatient, waiting for you to beg to be let out so he can refuse you. You rustle a little inside as a compromise, bringing your arms down to your sides so you can feel exactly how confining your situation is. You can extend your elbows out about as far as you’d be able to in the middle seat of an airplane. You keep your eyes shut.

When you press against the coffin top, it’s because you’re more bored than afraid. You’re done being alone and ready to be his girlfriend again. You manage to get it a quarter of an inch up before it falls back down onto the coffin with a hefty thud, and you’re not sure if it’s because the wood is heavy or because the Lawyer is still pressing on it. He hasn’t spoken this entire time and you wonder offhandedly if he left you alone in there. That scares you more than being in a coffin.

You’re done being alone and ready to be his girlfriend again.

“Okay, okay, let me out,” you say. There’s no response. You push once more against the coffin roof, hard as you can, but this time it doesn’t move at all. There’s a heavy, rumbling thud on top, inches from your face. Something heavy is on top of the cover.

“All right,” the Lawyer’s voice comes, muffled. “See you Monday.” You hear footsteps.

Of course he’s teasing you. He wants you to be afraid. You’re faking it when you say, “Come on, let me out, please!” which makes it more infuriating when he doesn’t.

You try a few more moments of silence, but nothing happens. Either the Lawyer is far more patient than you are, or he’s checking his phone, or he’s actually walked away.

“Let me out.” No reply. “Please.” No reply. “Come on, please, really let me out.” “Oh, all right, all right,” the Lawyer says, and pulls the cover of the coffin away and leaves you looking up at a crack of fluorescent light, the roof of the warehouse, and his face. He extends a hand and helps to pull you out. You wonder if you played the part correctly because it doesn’t seem like either of you had fun.

More like this
Mike Flanagan Teases 'The Midnight Club' In This Exclusive, Creepy Clip
By Grace Wehniainen
10 Must-Read New Books Out This Week
By K.W. Colyard
Nicola Coughlan Shared A Lady Whistledown Excerpt From ‘Bridgerton’ Season 3
By Grace Wehniainen, Alyssa Lapid and Sam Ramsden
She Founded American Girl To “Bring History Alive.” Then She Made Over A Town.
By Amanda FitzSimons
Get Even More From Bustle — Sign Up For The Newsletter