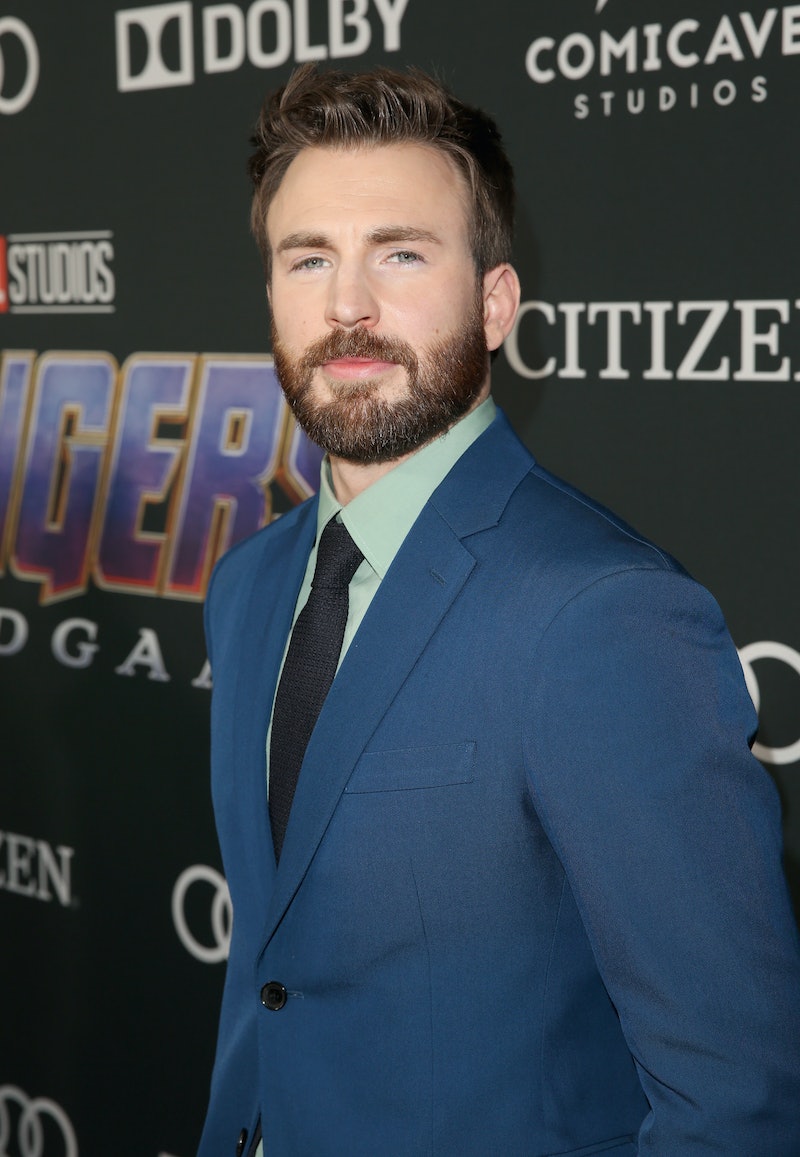 No one knows how to post a #ThrowbackThursday pic quite like a superhero from the past. Captain America himself, Chris Evans posted his first headshot to Twitter on Thursday, May 30. It was a hilarious throwback moment made even more memorable because of Evans' self-aware caption.

Alongside a black and white photo of a younger Evans sporting a black t-shirt and one earring (which, let's be honest, deserves an entire article of its own) Evans tweeted, "First headshot. Apparently I was hoping to be cast as a d*ckhead. #TBT." The Avengers: Endgame actor gives quite the smirk in his very first headshot, which is undated. But, it isn't the first time Evans has shared some iconic throwbacks with his followers.

In April, Evans posted a photo for National Siblings Day. He tweeted two throwback photos of himself with his three siblings along with this message: "Through siblings we practice trust, compassion, loyalty, creativity and love. I spent every waking second with mine creating the memories that I cherish above all others. Happy #NationalSiblingsDay to my first best friends." The Internet definitely seems on board with Evans' childhood memories, as several photos of Evans as a kid have circulated on Pinterest. Warning: you may die from cuteness overload.

Evans' ability to post on-point throwback content is one shared by several of his Avengers co-stars. Last month, Zoe Saldana posted a throwback pic of herself and Evans on the set of the 2010 movie The Losers. On April 28, Saldana shared a photo of her and Evans on set with the caption, "Flashback to Chris Evans and I goofing around while shooting The Losers years ago. Time flies and if anyone would’ve told us then about The Marvel Universe, we would’ve laughed and brushed it off. We were already grateful to be working and doing what we loved by telling stories. Love you Chris!"

The Losers was released just months before Evans donned the Cap title in Captain America: First Avenger. Saldana joined the MCU four years later as Gamora in Guardians of the Galaxy. Another major Marvel actor is Mark Ruffalo, who used the power of the throwback against Evans in October 2018. It all started on October 29 when Evans posted a teenage photo of Ruffalo, who plays Bruce Banner/Hulk in the MCU. "It actually makes me furious that I can't hang out with this kid," Evans tweeted.

Ruffalo took matters into his own hands two days later when he tweeted not one, but two adolescent photos of Evans. He captioned his photos identically to Evans' original post. If anything, this childhood photo battle made fans more excited than ever to dig up pics from the actors' past on the internet.

Now that Evans time as Steve Rogers and Captain America has ended (for now, at least), he'll have more time to reminisce about his younger years. That is, when he's not prepping his upcoming political website, "A Starting Point," which reportedly aims to present political information without a partisan spin.

There's no way to spin Evans' throwback photos, they're always legendary — and always welcome in our feeds.