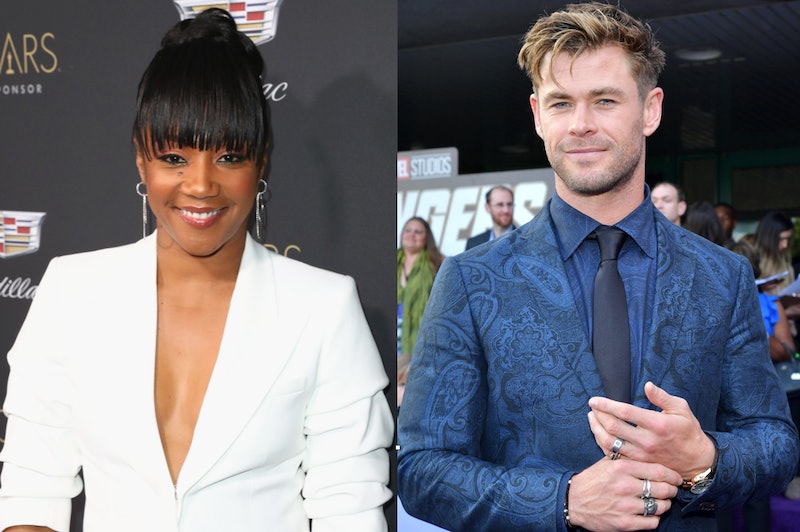 Every now and then, movies give us duos that are so unexpected, they can't help but be amazing. And, oh, does Hollywood have an odd pairing for you. Chris Hemsworth and Tiffany Haddish will star in a buddy comedy together that promises to give you all the hilarious gags you've come to expect from the two actors.

According to an exclusive Deadline report, Hemsworth and Haddish are going to star in the movie Down Under Cover that pairs them in a buddy-cop relationship. The official synopsis, per the report, involves Hemsworth as a detective who needs to go undercover to solve several casino heists. The suspects? Australian strippers. You can already imagine that his undercover identity is going to be another Australian exotic dancer. He has the accent, and experience doing shirtless scenes so... it's clearly the only reasonable step.

Unfortunately for him, he is "forced" to partner with Haddish's character, "a lone wolf who does things only one way: hers." As one might expect, it sounds like they're going to be direct opposites of each other, but, as the report continued, "together they have to work as an unlikely duo to solve the crime of their careers." No doubt, just as the buddy comedies that came before it, Down Under Cover will end with the two lead characters actually learning from each other and getting along.

Haddish is best known for her work in the 2017 hit comedy Girls Trip, and she's new to the buddy comedy genre. Hemsworth, however, is not. The Marvel superhero actor dipped a toe in the genre in Thor: Ragnarok, arguably the best Thor movie and his biggest comedic performance to date. He's also currently gearing up for the release of Men In Black: International, a buddy comedy with a sci-fi twist.

Speaking of stepping into the comedy-action genre with the film, Hemsworth told Esquire that he actually had a lot of experience in the comedy genre. "From Thor 3, definitely, it became hugely improvised," Hemsworth shared in the 2018 interview. "And I'm so glad I've been able to work with Paul [Feig, director of Ghostbusters] prior to that. And I've done Saturday Night Live a couple of times; I have a movie called Vacation. So by the time I got to Thor 3, I was incredibly enthusiastic to do it. Taika Waititi, the director, had the same opinion. And we carried that into Avengers."

Hemsworth has had a long time to work on his comedy chops, and what better way to show off what he's learned than to star opposite Haddish, a breakout comedy superstar? It will definitely be fun to see these two heavy-hitters play opposite each other.

Not much else is known about the movie, other than the stars, Hemsworth and Haddish, and the basic plot points — gambling, strippers, and a buddy cop set up — but even with little information, it's clear that Down Under Cover is going to be a good time. It's still in the pre-production stage of finding a home with a production company, so don't expect it for a bit. But the wait should be worth it.

More like this
Gabby Petito’s Family Responded To The New Lifetime Movie About Her Final Days
By Grace Wehniainen
20 Photos Of The 'Hocus Pocus' Cast Then & Now
By Radhika Menon
13 Photos Of The 'Blonde' Cast Vs. Marilyn Monroe & Other IRL Counterparts
By Marina Watts
How To Stream 'Bros'
By Morgan Leigh Davies
Get Even More From Bustle — Sign Up For The Newsletter