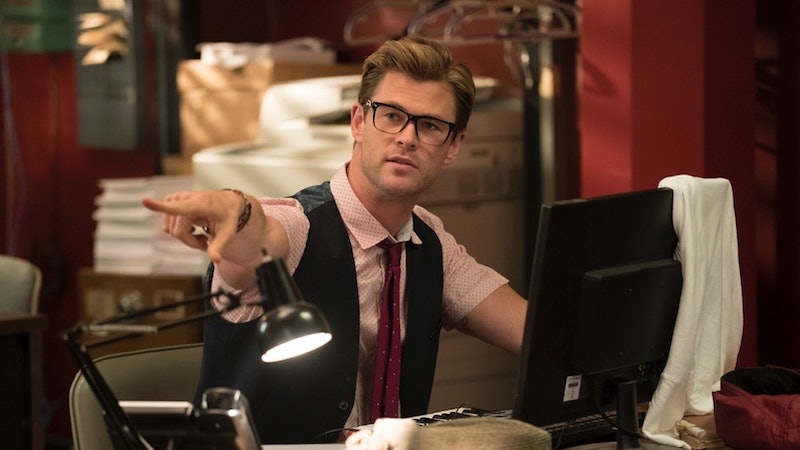 Chris Hemsworth may be best known for his portrayal of Thor, the God of Thunder in the Marvel Cinematic Universe, but when he isn't busy pummeling villains with his hammer, the actor has also been linked to another popular franchise that became near and dear to his heart. Hemsworth starred in 2016's all-female Ghostbusters reboot movie, playing the role of their hot-but-dumb receptionist, Kevin. It was a film he loved being apart of, which is why Hemsworth still wants a Ghostbusters sequel to happen and he still hasn't forgotten the backlash and campaign of negativity the film received from so-called fans.

Unfortunately, a sequel seems unlikely at this point and Hemsworth has some choice words for the internet trolls who attacked Ghostbusters and criticized the reboot simply because the lead roles were being played by women. The actor opened up about the experience in a recent interview with Variety. “That whole period I was like, ‘What ownership do you guys have over those characters?’” Hemsworth told the outlet, regarding the fan outrage over an all-female cast. “Oh, you watched the film, therefore you should have a say over where it goes? I thought it was very unfortunate and kind of disappointing.”

And the winner for best Chris in Hollywood goes to...

Hemsworth may be a prominent fixture in most of his movies these days, but in Ghostbusters he happily took a backseat as a supporting character to Melissa McCarthy, Kate McKinnon, Leslie Jones, and Kristen Wiig's leading roles. He did a lot with the material he was given and proved that he has a knack for comedic timing, which has gone on to help him in other projects as well.

In fact, Hemsworth credits his work on Ghostbusters with helping him to transition Thor into a more comedic role for Avengers: Endgame, though ironically, there was a point where he almost backed out of Ghostbusters entirely. “The night before I was shooting, I almost pulled out,” Hemsworth admitted in the same Variety interview. “Three or four weeks prior, Paul said to me, ‘I’m going to write up the character. Don’t worry.’ And then I got the script and nothing had changed.” He went on to add: “I was really scared walking onto that set. I had no real plan, so I was just feeding off of them, and I just felt ridiculous. So I used that.”

And that tactic more than paid off. It's impossible not to watch his portrayal of Kevin without bursting into a fit of laughter. Even his costars had a difficult time staying in character with him around, which they revealed when Bustle visited the film's set back in 2016 before the movie hit theaters. "Chris Hemsworth made us break more than anybody, which is like, don’t you have enough? Haven’t you been given two scoops to begin with?" McCarthy told reporters at the time. "He is a really really funny guy and one of the best improvisers I’ve ever worked with."

Needless to say, if the opportunity ever does present itself for a Ghostbusters sequel, you can definitely count on Hemsworth being one of the first to sign up — and good luck to any haters that try to stand in his way.