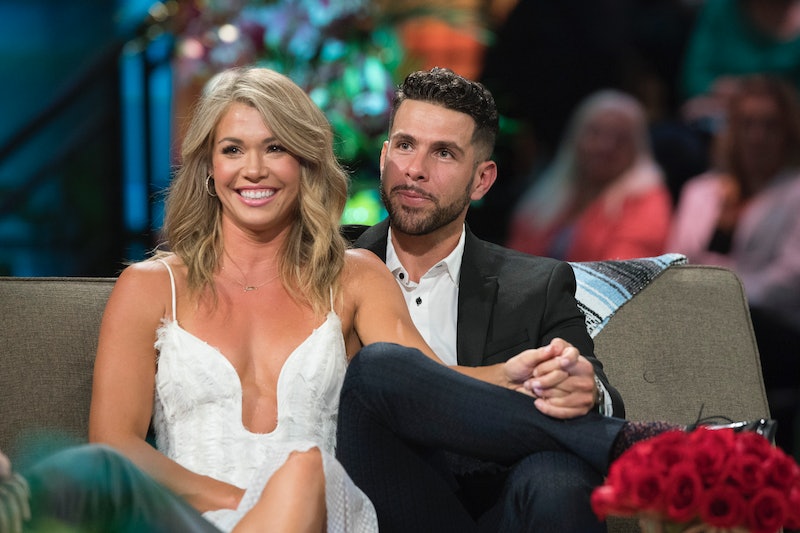 Bachelor in Paradise stars Chris Randone and Krystal Nielson haven't shared their wedding date just yet, but they just took some major steps in their prep for the big day. Chris and Krystal's engagement party was this week, and plenty of their fellow Bachelor Nation members helped celebrate.

In an email to Bustle, Krystal confirmed that the photos she and Chris posted were from their engagement party in Escondido, California. The couple celebrated with family and close friends, and it looks like they had an absolute blast. Krystal told Bustle, "It means the world to us to have so much love and support as we prepare for our upcoming wedding."

On Thursday, Krystal posted a photo with Annaliese Puccini and Angela Amezcua, who both appeared alongside her and Chris on Paradise. The photo is sweet enough on its own, but Krystal also used it to reveal her wedding hashtag. And honestly, it's too perfect. "Girls in town. 💕 #poppinchristal #wehaveahashtag!!!!!!," the fitness coach captioned the picture. And as endearing as their nicknames are — they even inspired the couple's web series, Glitter & The Goose — the hashtag playing on their actual first names is too perfect.

Plus, Krystal's mom left the sweetest comment on the picture. "You ladies are just as sweet as you are beautiful. Enjoyed our evening tonight," Tess Nielson wrote. Now that's mom goals.

In addition to Annaliese and Angela, Bachelor alums Chelsea Roy, Katie Morton, and Heather Martin were in attendance. The two ladies from Colton's season, along with Chelsea, appeared on Angela's Instagram Story. Bachelor Nation favorites Jared Haibon and Ashley Iaconetti were there, too, along with Tanner Tolbert and Jade Roper.

Krystal and Chris also had engagement party photos taken by photographer Billy Economou of BE Studios, and they're absolutely stunning. Their road to love may have been unconventional — they did get engaged after spending just weeks together on Paradise, after all — but these two really seem happy with each other.

For one of the photos, it looks like Chris and Krystal decided to wear full-on wedding outfits. As fans may recall, Krystal tried on wedding dresses in September and has shared intermittent photos of wedding dress-shopping since then, but these probably aren't the clothes they'll wear to their official wedding ceremony.

Chris also posted another photo of him and Krystal, adding a sentimental caption about their relationship. He wrote on Instagram,

"We don't have the photos from last night yet but found this one on my phone showing a rainbow shinning through my queen. It made me feel like this symbolizes the peace and serenity we have in our relationship. I'm also lucky to have such a powerful woman by my side standing strong."

Plus, Chris shared a video of the engagement party venue ahead of the celebration. A number of fans speculated that the festivities may have been a secret wedding. The couple made clear this was just an engagement party, but it is making fans wonder how elaborate their actual wedding will be.

Chris and Krystal aren't married just yet, but if this engagement party is any indication, their wedding will probably be pretty stunning. And it's safe to guess that plenty of their Bachelor family will be in attendance. For now, the San Diego residents are just basking in each other's love, and the support they have from their families.