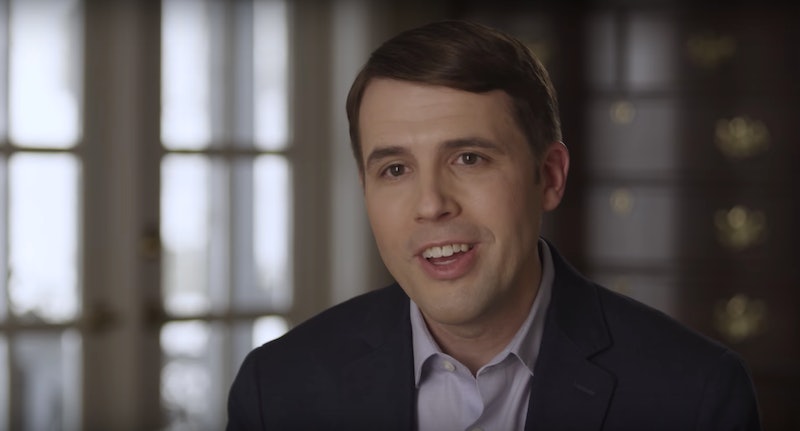 The results are in: Chris Pappas has won New Hampshire's Democratic primary for the first congressional district, the Associated Press reports, and now has a chance at becoming the state's first openly gay congressperson. Pappas defeated a crowded field of 11 other candidates., including Bernie Sanders' son, to win the Democratic party's nomination to represent the highly-competitive district.

Although votes are still being counted, Politico, the Associated Press and Decision Desk HQ all called the race for Pappas on Tuesday evening after early returns showed him leading the rest of the field by over 30 percent.

New Hampshire's first congressional district is considered a toss-up, and has voted unpredictably over the last decade. Though once a reliably Republican district, it's flipped in each of the last four elections cycles, and sent a Democrat to Congress in 2016 while simultaneously backing Donald Trump in the presidential race. Since 2006, the district has never gone more than four years without replacing its incumbent representative with a lawmaker from the opposite party.

The most recent candidate to represent the district is Rep. Carol Shea-Porter, who's serving her fourth non-consecutive term. But Shea-Porter announced her retirement in October, and a flood of Democratic candidates quickly entered the race to replace her.

One of those candidates was Levi Sanders, son of the junior senator from Vermont. Levi played up his similarities to his father during the race, at one point telling Vice that the primary difference between the two was that "I’m a vegetarian and he’s not." In an unusual twist, however, Bernie didn't endorse his son, explaining that he opposes "dynastic politics."

Instead, the race largely came down to Pappas and Maura Sullivan, an Iraq war veteran who worked in appointed positions in the departments of Defense and Veterans Affairs under President Obama. As the two candidates hold largely similar policy views, the race quickly became dominated by other issues.

Sullivan was endorsed by EMILY'S List and former Health and Human Services Secretary Kathleen Sebelius. She touted her experience in the Obama administration during the campaign and, according to the Washington Post, raised more than twice as much money as Pappas. However, she faced criticism for lacking any longstanding roots in the state: Sullivan was born and raised in Illinois, and lived in Washington D.C. until 2017.

Pappas, meanwhile, was endorsed by both of New Hampshire's senators and Rep. Ann Kuster, its other representative in Congress. He played up his experience managing the Puritan Backroom restaurant, a popular New Hampshire staple, and his time on the Executive Council of New Hampshire. That body plays an advisory role in New Hampshire's government and has some veto power over the governor.

Although New Hampshire's first congressional district has swung back and forth between the parties over the last decade, the nonpartisan Cook Political Report ranked it a "lean Democratic" seat prior to Tuesday's primary, indicating that Democrats are somewhat, but not overwhelmingly, likely to retain control of it in November.

Republicans also held a primary for the seat on Tuesday. That race hasn't yet been called, but as of this writing, Eddie Edwards holds a small lead over State Sen. Andy Sanborn.