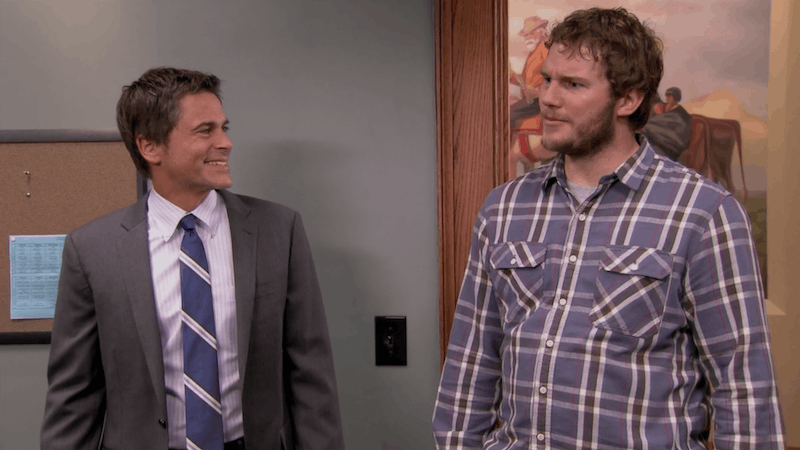 Mouse Rat, are you listening? Former Parks and Recreation costars Rob Lowe and Chris Pratt are starting a band. Well, not really, but they joked on Monday about coming up with the perfect band name and making music together. On Instagram, Lowe and Pratt shared the same selfie after golfing together, which resulted in them both creating similar captions about the photo resembling an album cover.

After sharing two other golfing pictures (another featuring Pratt and Lowe's son, John Owen Lowe), the 9-1-1: Lone Star actor captioned his selfie with the Guardians of the Galaxy star,

"Sorry for the triple post, just so excited to get this new album cover art from @prattprattpratt Now all we need are songs and a band name. We will both be going off the grind for a while to figure it all out. Stand by..."

"Rolo and I got the album cover. Now we're going offline for a while to focus our music. Stay tuned. Big things coming."

Parks and Rec fans will truly appreciate their captions, especially since Pratt's character in the NBC comedy, Andy Dwyer, was a "musician." A few of their more popular tracks included "Catch Your Dream" (Leslie Knope's campaign anthem), "5000 Candles in the Wind" (a tribute for Li'l Sebastian), "The Pit" (dedicated to the pit that started it all — and broke Andy's legs), and, of course, "Sex Hair" (played during the Pawnee Cares diabetes telethon).

If Pratt and Lowe really were starting a band and needed help with a unique name and writing songs they'd have Andy, Mouse Rat, and even Lowe's character, Chris Traeger, to assist them. What better way to be creative than by channeling their inner Parks and Rec characters?

Believe it or not, ever since saying goodbye to Parks and Rec in 2015 Pratt and Lowe have maintained a super close relationship. They even golf all the time together. On March 17 of this year, they celebrated Lowe's 55th birthday by hitting the greens side by side.

Also, Lowe couldn't be more thrilled for Pratt and Katherine Schwarzenegger's upcoming nuptials. He told Extra in March about the couple, "They are such a beautiful couple…They are the ones that are blessed because they found each other, but I am blessed that I get to watch it."

Oh, and did you know that Lowe's wife, Sheryl Berkoff, is Schwarzenegger's godmother? So, they're basically all family. Lowe revealed to Extra, "My wife Sheryl is her godmother, so by proxy, I am the godfather."

It's really not that odd for Lowe and Pratt to be taking selfies that turn out like album covers and then joke about taking time away from the spotlight to focus on music and a band name. Let's face it, you know whatever they'd come up with, it would LITERALLY be amazing.