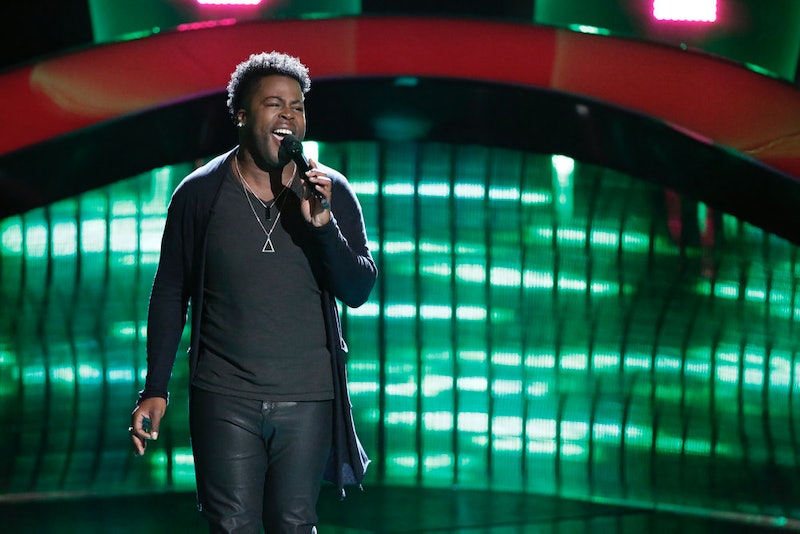 After stunning fans and coaches alike, The Voice's Chris Weaver is already through to the knockout rounds. Not that it was much of a surprise — back in the audition rounds he made all four coaches turn around for him, so he was a favorite from the start. He's also one to watch because he has a bit of a secret weapon. Unlike most of his fellow stars, Chris Weaver has an alter ego — one that may give him a leg up in the competition. That second identity is a drag queen, Nedra Belle.

Weaver grew up singing in church and with his mother as a Pentecostal preacher, he would end up following in her footsteps to become one too, according to his Voice bio. However, his bio notes that he never felt like he could be his true self, living in the closet — that is, until he came out and first learned about drag. In fact, Weaver thinks that with drag becoming more mainstream, like with the success of RuPaul’s show on VH1, Nedra may make her debut on The Voice at some point this season.

“I think that’d be a great idea. Listen, if [the show is] down for it, I’m down for it," Weaver says in a phone interview with Bustle. "I would love that … I think it could be something different — something never done on the show, and, you know, it would bring a different light to the show for sure, and to the art of drag.”

But more than his drag persona, it was his background in church choirs that led Weaver to pick Jennifer Hudson as his mentor, he says. Although he loves his faith and being a part of a religious community — musically, he says he wants to branch out — and he knew that Jennifer Hudson had done exactly that.

“I didn’t want to be stuck being a church singer all my life. I knew there was something else out there," Weaver says. "So, to have someone who can guide you in that direction. To be on the other side, and be successful, without losing your background. That’s why I gravitated towards her.”

That wasn’t the only reason he picked Hudson, however. After all, he was this season’s first contestant to get all four coaches: Jennifer Hudson, Miley Cyrus, Blake Shelton, and Adam Levine to turn around — so, he had his pick of coaches. So, what put it over the top? Well, he and Hudson have a bit of a history. In his audition episode, he revealed that two years ago, he was at a party for Hudson’s Broadway show, The Color Purple and Weaver was able to perform for her. And just like his blind-audition performance, Hudson threw a shoe at him — a huge compliment. The two got even closer during the preparation for The Voice battle rounds. Weaver got to work with not only Hudson, but also Hudson's chosen advisor — four-time Grammy award winning musician Kelly Rowland.

Like Weaver’s new mentors Hudson and Rowland, his musical inspirations were and are exceedingly passionate and give singing their all. “I’m like, old school,” he says. “I love Luther Vandross, Anita Baker, and Patti Labelle. I listened to a lot of that growing up … It was real music. They were real vocalists who gave their heart and soul to what they sang.” Hopefully, by the time the season’s through, he’ll give us a performance of a song by one of them just as good as his blind audition where he sang “Try a Little Tenderness” by Otis Redding.

So, what’s Weaver’s ideal ending for all of this? Ultimately, he’s already fulfilled his dreams by simply being on the show. The Voice has allowed him to travel and sing for people, but he hopes that the show continues to allow him to reach a broader audience.

“There’s so many people that aren’t necessarily afraid to be who they are, but don’t have the right outlet or support to do it," he says. "So, if I can incorporate that and travel the world and bring light to that … let them know there’s more supporters than naysayers.”

Plus, he knows that for the LGBTQ community, he’s becoming a bit of a role model — and he doesn't take that lightly. “I’ve gone through so much in life where I was hiding a lot and then I finally got to a place where I was done," he says, adding that he wants to influence others to “be you, live out loud, you only have got one life.”

So, if either Chris Weaver or Nedra Belle has a supporter in you, keep rooting for him to stay and voting for him when you can. The good news is that, with all four coaches having wanted him on their team from the get-go, his chances on The Voice are looking good.