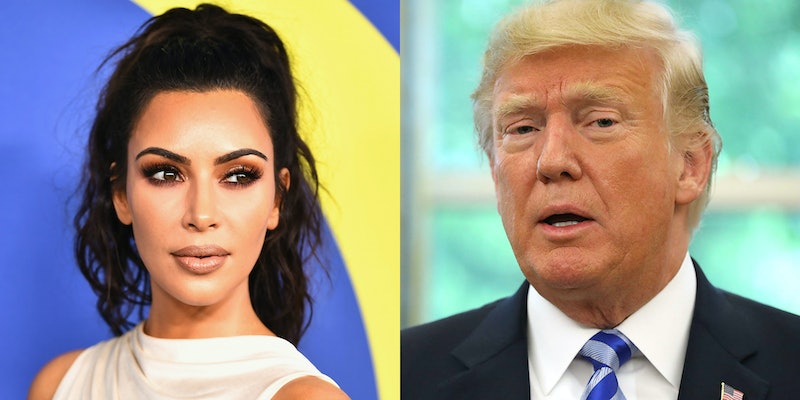 After her success in lobbying for the pardon of Alice Marie Johnson, the star of Keeping Up with the Kardashians has someone new that she's trying to help free from prison. Kim Kardashian has taken up the cause of Chris Young, who's serving a life sentence for a nonviolent drug offense.

Young has now been in prison for about eight years. According to the Buried Alive Project, one of the organizations that's fought for a commutation of Young's sentence, he's kept busy over that time — studying, tutoring prisoners working towards their GEDs, and doing clerical law work — and maintains hope for his release. "If I don't BELIEVE I will be free one day," he told Buried Alive, "then I will never be free."

Young was arrested in 2010 at the age of 22. VICE reports that police apprehended him and three others, one of whom had cocaine and crack in his car. They also had $10,000 in cash and were later convicted of dealing drugs (though Young wasn't found to be the leader). His case was considered more severe than it might otherwise have been because his own car was found with a handgun in it and because they'd been arrested within 1,000 feet of a school.

VICE reports that Young was originally offered a 14-year plea deal but turned it down, thinking it was too high. He decided to go to trial instead, where numerous factors — including the fact that the prosecution filed an optional 851 enhancement because it wasn't Young's first offense — forced Judge Kevin H. Sharp to give him a life sentence without parole. The judge has often spoken out against that sentencing.

"If there was any way I could have not given him life in prison I would have done it," he told the Tennessean this week. "What they did was wrong. They deserved some time in prison, but not life."

"My client, Chris Young, is serving life w/o parole for low-level role in a drug case," his lawyer, Brittany K. Barnett, tweeted on June 26. "The unspeakable cruelty of Chris being set to NEVER breathe air as a free man again epitomizes a failed system thriving off human misery. Unacceptable."

One aspect of Young's story that's received special attention is the speech he gave at his sentencing hearing. According to Buried Alive, he worked for months on it and memorized it in full, despite the fact that it was 25 pages long. "In it, Chris spoke of Nero, Van Gough, Cromwell, Descartes," Buried Alive notes. VICE reports that much of Young's material was inspired by the encyclopedias he studied during the years he spent in jail awaiting his sentencing. He would practice his speech aloud in the shower.

According to Buried Alive, Judge Sharp remembers the speech well. It also impressed Young's friends in the courtroom, one of whom whispered (per VICE), "That's some real sh*t."

Young also spoke of his childhood and the terrible poverty he experienced. According to Buried Alive, he described not always having running water or electricity. He talked about how his mother suffered from a drug addiction and was abused by her partner. He remembered how his older brother committed suicide at age 22; the 18-year-old Young was the one to discover his body.

Kardashian met with President Donald Trump in D.C. on Wednesday to discuss criminal justice reform. According to TMZ, Judge Sharp was also at the meeting, and it seems likely that they advocated for Young's release. Maybe Young's luck will finally turn now that such a high profile celebrity has been moved by his case.

More like this
Mel B Speaks Out Against Domestic Violence In A Powerful Speech
By Sophie McEvoy
Where Is Armie Hammer’s Ex-Wife Elizabeth Chambers Now After 'House Of Hammer'?
By Grace Wehniainen and Radhika Menon
Chris Kaba's Family Continue Fight For Justice After Viewing Police Bodycam Footage
By Sophie McEvoy
Women Around The World Are Cutting Their Hair In Solidarity With Mahsa Amini
By Darshita Goyal
Get Even More From Bustle — Sign Up For The Newsletter