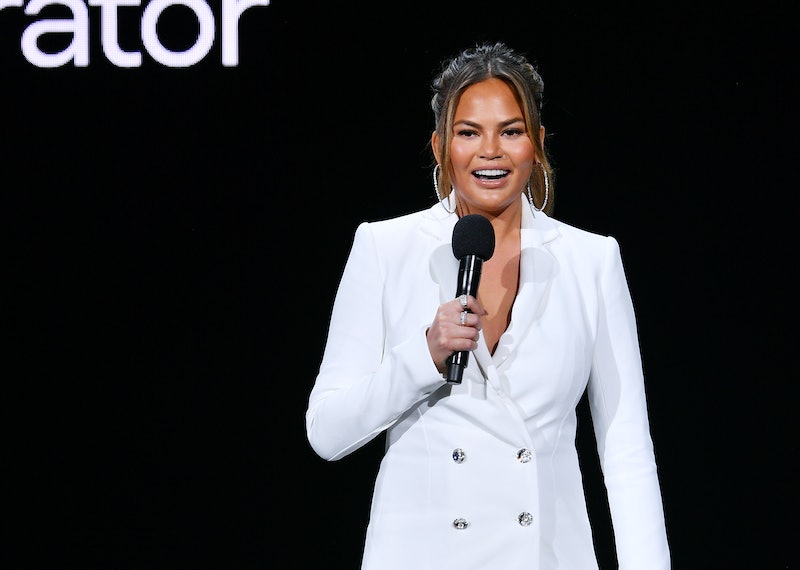 After Peanut Butter the hamster joined the Teigen-Legend household in March, fans have eagerly followed the saga of the new family pet. Peanut Butter briefly went missing during her first days at home, but fortunately, she's safe and sound now. In fact, Chrissy Teigen's new hamster video shows that the animal is adjusting quite well to her new house, and Luna seems like quite a devoted pet caretaker.

In Teigen's new video posted to Twitter, Luna is feeding lettuce to Peanut Butter, and the hamster is just gobbling it up. They've come a long way from Peanut Butter's first days at home, during which Teigen tweeted that she wasn't sure what she could feed the hamster.

"They told us we can feed her anything. My mom said 'rice?' And they go 'no, not rice,'" Teigen tweeted on March 10. But while rice may be out of the question, lettuce evidently isn't, and Peanut Butter seems to love the crunchy veggie. (And yes, it's fine for hamsters to eat vegetables, including romaine lettuce, according to Petco.)

Teigen also shared three Peanut Butter videos on her Instagram Story, all featuring Luna feeding the hamster lettuce. The way she watches Peanut Butter so intently, even gently petting her as she nibbles at the food, is really too cute.

Fans had the absolute best reaction to the video, too. One person noted that Peanut Butter's fur makes her look like she's wearing a towel, which fits right in with Teigen, who's known for lounging around in towels at home.

Another person made a joke about Peanut Butter's brief stint being lost around the house, tweeting, "Post a video of peanut butter with a newspaper displaying today's date. Not convinced this isn't a recycled vid."

The worry might stem from Teigen's March 11 tweet about Peanut Butter escaping from her cage. "Welp the hamster got out. just what you all told me would happen," the Lip Sync Battle host tweeted at the time. Still, she followed that up with an excited "found her!!" tweet, so Peanut Butter is doing just fine. (And no, it's probably not a "recycled" video.)

Other fans joked about Teigen cooking tiny amounts of food for the hamster.

There's one Peanut Butter mystery the new video still doesn't address, though. When Teigen first announced the hamster's arrival, she noted that her husband wasn't thrilled about the pet. "Luna and I bought a hamster today. Her name is peanut butter. John is not thrilled, which makes me love her more," Teigen tweeted on March 10.

So, has Legend warmed up to Peanut Butter over the past few months? Hopefully, Teigen will share the answer to that soon. But even if she's not the EGOT winner's favorite pet — the family also has three dogs — Peanut Butter still has plenty of love from Teigen and Luna.