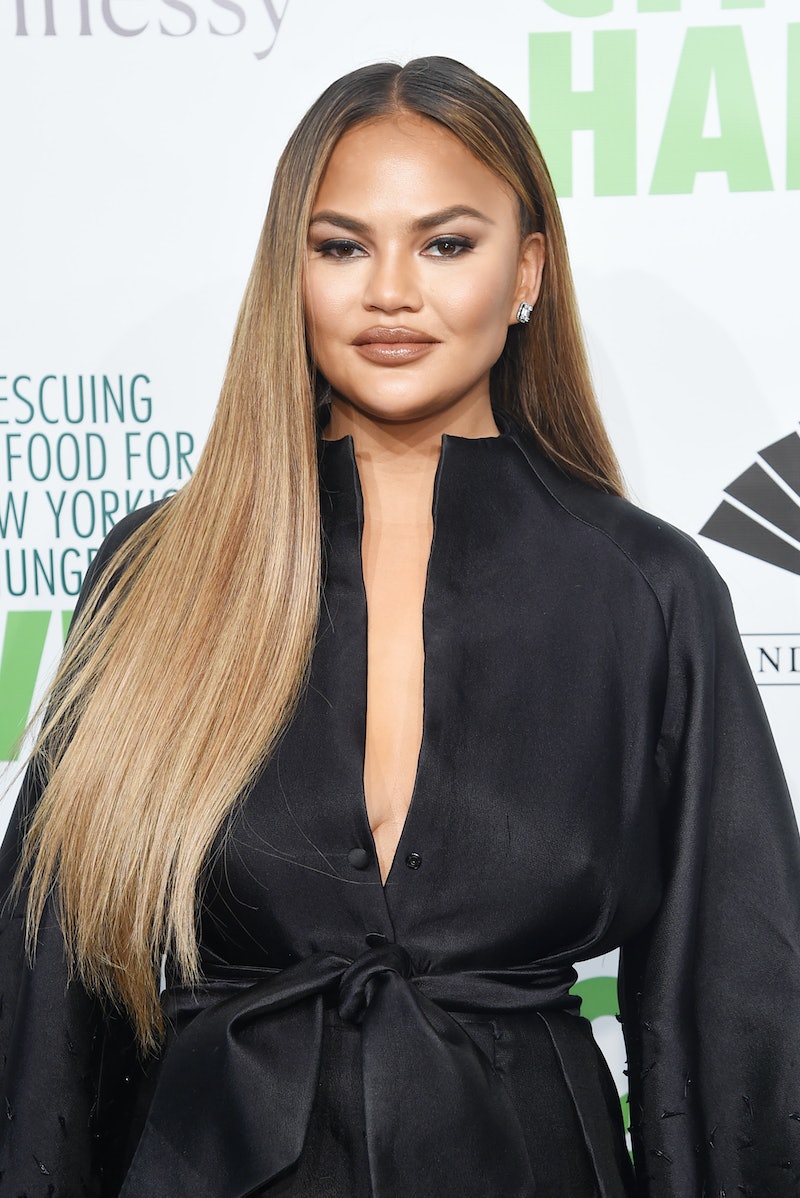 Those still reeling from the true crime Hulu series, The Act — you've got some pretty famous company. None other than the Internet's bestie Chrissy Teigen tweeted about Gypsy Rose Blanchard following The Act's Season 1 finale and fans will totally relate.

"I'm gonna need more gypsy rose anything," she declared on May 3, preaching to the choir of fans who not only devoured every episode of the fictional Hulu series, but have been following the story of Gypsy Rose and her mother, Dee Dee Blanchard, for years.

As reported by People, Gypsy is serving out a 10-year prison sentence after pleading guilty to second-degree murder in the June 2015 stabbing death of her mother, Dee Dee. Rose allegedly conspired with her then-boyfriend, Nicholas Godejohn, to kill her mother and Godejohn is currently serving life in prison. Per Rolling Stone, experts now believe Dee Dee had Munchausen syndrome by proxy, which led her to tell Gypsy Rose that she had an array of medical conditions and needed to use a wheelchair when she did not. Due to the 2017 HBO documentary Mommy Dead and Dearest and The Act, plenty of people are waiting to see what Gypsy Rose is doing now, and what she'll do next.

This isn't the first time Teigen has tweeted about the true crime case and the documentary and television show it inspired. "i have seen 'mommy dead and dearest' 7 times just to show it to my 7 friends," Teigen hilariously tweeted back on March 28. "Thank you to @TheActOnHulu for giving me more."

At the time, actor Joey King, who plays Gypsy Rose on The Act, retweeted Teigen's excitement and wrote, "Wait...is this real life." Indeed, it is.

Clearly, the world is not finished deconstructing the story of Gypsy Rose and her complicated relationship with her mother. Per usual, Teigen speaks for the masses with her relatable take on The Act. Gypsy Rose Blanchard makes for a fascinating person and character, ripe for additional projects. Gypsy Rose's stepmom Kristy Blanchard has spoken about making her own television show based on the events that lead to Dee Dee's death. In a recent interview, Kristy told Vulture that she felt The Act left out parts of the story, noting, "If they're gonna do a show, the whole truth needs to be out there. It goes so much further than Dee Dee and Gypsy. It goes back to the way Dee Dee was raised and stuff like that."

Regardless of whether or not Kristy's show is produced in the future, something tells us if Chrissy Teigen puts it out into the universe that she wants more "Gypsy Rose content," someone will listen. The universe is already aware that when Teigen is ready for a new show to marathon, she makes it known. This is especially accurate when it comes to getting her true crime fix. On February 12, Teigen tweeted, "true crime docs are not at all keeping up with my personal demand." Netflix replied, offering up Abducted in Plain Sight as a recommendation. "I've already watched it three times. you need to put out 2 a day, at least," she replied back.

Teigen makes watching streaming content an art form — and it should be respected as such. And for her art to thrive, she needs more Gypsy Rose, just like the rest of us.

More like this
Glenda Cleveland Died 2 Decades After Trying To Turn In Neighbor Jeffery Dahmer
By Brad Witter
What Reporting On The UK’s Most Prolific Cyber Stalker Taught Me
By Sirin Kale
Alleged Cult Leader Larry Ray Is Awaiting Sentencing Following His Conviction
By Brad Witter
Where Is The Bling Ring’s Rachel Lee Now?
By Arya Roshanian
Get Even More From Bustle — Sign Up For The Newsletter