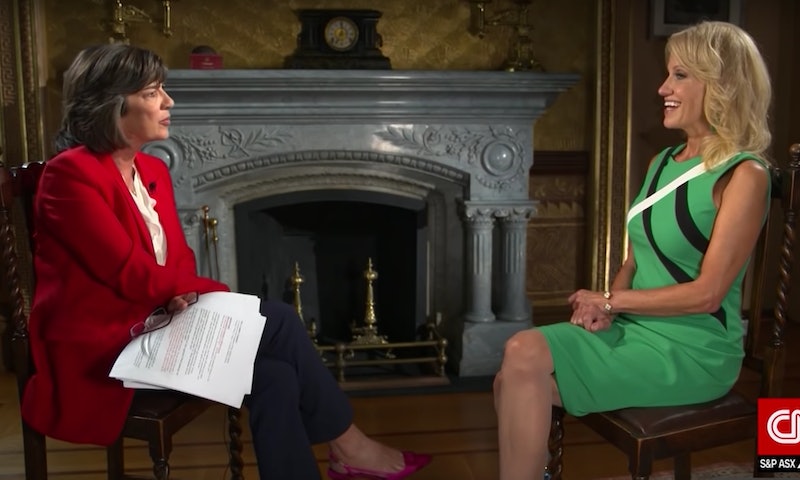 After the PBS veteran was ousted amid allegations of sexual harassment, a well-known female journalist stepped in to take over his nightly time slot. Christiane Amanpour's new PBS show replaced Charlie Rose's talk show on Monday, kicking off with an interview with President Donald Trump's top aide.

Kellyanne Conway, Amanpour and Company's first guest, had a tense interview with Amanpour regarding the president's continuous attacks on the media. While Conway told Amanpour that she believes Trump's negative rhetoric about the press is "not healthy for the body politic on either side," she also claimed that journalists aren't doing their due diligence to confirm allegations before presenting them to the public as fact.

"I and others have tried, the president has tried, to turn down the temperature, to give more access," Conway said on Amanpour and Company. But she immediately launched into criticisms that the mainstream media doesn't cover issues when the president is making progress. "I think the media will start covering the economy if it ever goes down. I think they'll start covering the regulation if it ever starts going up again."

Nevertheless, Amanpour pushed for Conway to address the ways in which Trump's "fake news" mantra could be hurting the nation.

"It has got worse in the last few months," Amanpour told Conway. "And people are using the 'fake news' slogan to justify the unprecedented amount of imprisonment and violence directed towards journalists."

Conway responded by claiming that she sees reports "every single day that are just not true" and differentiating between seasoned journalists like Amanpour and "people who call themselves reporters because they sit on Twitter all day seeing who wrote what, and then they repeat it, even though they don't independently research it themselves."

Amanpour and Company, an extension of the reporter's show on CNN International, premiered 10 months after Rose was fired from both PBS and CBS for allegedly harassing female co-workers for decades. At the time, Rose issued a statement apologizing for "inappropriate behavior," adding that he does "not believe that all of these allegations are accurate."

More than two dozen women have accused Rose of sexual misconduct and three are currently suing him for alleged "blatant and repeated sexual harassment." Rose's lawyers moved to dismiss the suit on Friday, claiming in the motion that the plaintiffs are "exploiting the #MeToo Movement and bootstrapping the accusations of sexual harassment made by third parties against Rose," CNN reports.

When PBS announced that Amanpour would permanently take over Rose's time slot in May, she issued a statement explaining her excitement —notably leaving Rose out of it.

"I'm delighted to expand my role at PBS from interim to permanent along with this remarkable diversity of voices and views," Amanpour said. "Never has the time for exploring our world and America's place in it been so urgent."

Neal Shapiro, the chief executive of PBS' flagship station WNET, told The New York Times that Amanpour was a natural fit because the PBS audience is "very intelligent, very globally focused." He added that it "didn’t take long for us to realize that Christiane was quite a good match for PBS."