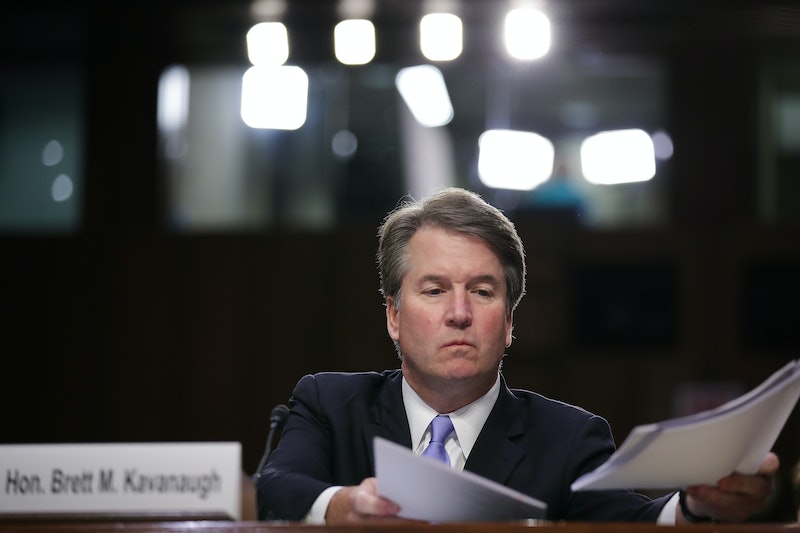 Only days after the New Yorker reported that an anonymous woman had accused Supreme Court nominee Brett Kavanaugh of sexually abusing her in high school — a claim that Kavanaugh quickly and categorically denied — the woman in question has attached her name to the allegation. California researcher Christine Blasey Ford publicly accused Kavanaugh of sexual misconduct in an interview with The Washington Post. She claims that he had attempted to rape her when the two of them were teenagers and that she suffered from the psychological consequences of the incident for years afterwards.

Bustle has reached out to Kavanaugh's office for comment regarding the new report.

Ford told the Post that she had initially decided not to come forward publicly with her story, because she thought she would be attacked and she doubted that her story would make a difference in Kavanaugh's confirmation.

“Why suffer through the annihilation if it’s not going to matter?” Ford told the Post.

However, after the New Yorker published her story on Friday, even without her name, the attacks already started flowing in. She told the Post that inaccuracies in her story had begun to take hold, and that multiple reporters had already tried to visit her and had tried to contact her.

“These are all the ills that I was trying to avoid,” Ford told the Post. “Now I feel like my civic responsibility is outweighing my anguish and terror about retaliation.”

Ford also said that she took pains to corroborate her side of the story, giving the Post notes from a 2012 therapy session in which she talked about the incident. Later, at the advice of her lawyer, noted sexual harassment lawyer Debra Katz, she underwent a polygraph test with a former FBI official, which showed that she was truthful in her allegations. (Though the validity of polygraph tests has been widely debated among experts.) Her husband, who was also at the therapy session, remembers Ford using Kavanaugh's name and expressing her worry that he would one day be up for a position at the Supreme Court.

Kavanaugh, for his part, also has evidence to back up his denial. After being named in the New Yorker article, the other high schooler who was allegedly in the room with Kavanaugh and Ford denied that the incident ever took place in an interview with the Weekly Standard.

"It's just absolutely nuts. I never saw Brett act that way," Mark Judge, who is now a journalist in Washington D.C., told the Weekly Standard.

Soon after the publication of the New Yorker's story, Republican Sen. Chuck Grassley released a letter signed by dozens of Kavanaugh's female high school classmates, claiming that Kavanaugh "has always treated women with decency and respect. That was true when he was in high school, and it has remained true to this day."

Before Ford went public, the general consensus was that an anonymous allegation wasn't going to pose a serious threat to Kavanaugh's confirmation. Ford told the Post that threats to her wellbeing no longer outweighed the importance her story could have to the country. Her lawyer, Katz, told the Post:

Victims must have the right to decide whether to come forward, especially in a political environment that is as ruthless as this one. She will now face vicious attacks by those who support this nominee.”

It's still far from clear whether adding her name to her story will change the course of Kavanaugh's confirmation, but at least she's made the decision on her own terms.