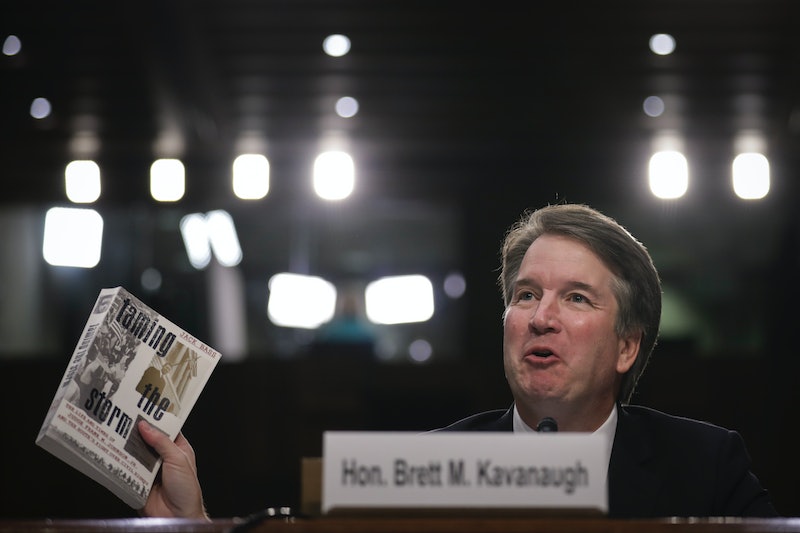 As the Senate Judiciary Committee moves forward with another hearing in Brett Kavanaugh's Supreme Court nomination now that he's been accused of sexual misconduct, Sen. Susan Collins (R-Maine) proposed that Kavanaugh's lawyer question his accuser and vice versa. But Christine Blasey Ford shouldn't be cross-examined for the simple reason that this isn't a criminal trial, women's organizations and Supreme Court experts argue.

After Ford went on the record with The Washington Post accusing Kavanaugh of trying to sexually assault her when they were both in high school, Kavanaugh "categorically and unequivocally" denied her allegations. Ford agreed to testify to the Senate Judiciary Committee about her claims on Thursday, and now, some are calling for her to prove her claims by agreeing to be cross-examined by Kavanaugh's lawyer. (Another woman, Deborah Ramirez, has also accused Kavanaugh of sexual misconduct, which he also denies, but she has not been invited to testify as of Monday morning.) Collins suggested this was the best way to handle the allegation in a letter she sent to the chairman and ranking member of the Judiciary Committee that claimed this would "elicit the most information." Many, however, disagree with Collins' assessment that it is necessary.

"She put her story out there, now it’s up to Brett Kavanaugh to answer for this," Amanda Thayer, deputy national communications director for NARAL Pro-Choice America, tells Bustle. "This isn’t any kind of legal trial. He’s literally going through a job application for one of nine coveted seats on the highest court of the land, and that’s not something that should be either rushed or taken lightly."

Despite the fact that Ford accused Kavanaugh of committing a crime in the 1980s, the purpose of the confirmation process isn't to determine whether he should go to jail for an alleged crime, it's to determine whether he's fit to serve on the Supreme Court. That is precisely why legal experts say cross-examining her before the Senate Judiciary Committee would be completely inappropriate.

Unlike a trial, Ford doesn't need to prove beyond a reasonable doubt that her allegation is true; she chose to come forward with an allegation, and it's senators' job to listen to her story and take it into consideration when deciding whether or not to confirm Kavanaugh to the bench, according to Sam Erman, a Supreme Court expert and associate professor at the USC Gould School of Law.

The concern for Kavanaugh at this stage, according Erman, is: "Do we think that this is a job that you would be good for?" If Ford were to testify, Erman says allowing Kavanaugh's attorney to question her would be "bonkers." Not only would it be unprecedented for a confirmation hearing, but he also says it would likely discourage women from accusing Supreme Court nominees of sexual misconduct in the future.

"It’s very odd to think that for the senators trying to decide whether or not to confirm this person, that the best way to do that is have the candidate and somebody who claims to have been harmed by the candidate basically have a fight with each other and then decide based on that," Erman says. "If the rule is, 'if you charge someone with a criminal act, they then get to beat up on you on national TV,' people aren’t going to come forward."

Ford's accusations inevitably brought back memories of Justice Clarence Thomas' 1991 confirmation hearing, during which Anita Hill testified before the Senate that Thomas sexually harassed her while serving as her supervisor (which he denied). Hill wrote in a New York Times op-ed this month that the Senate Judiciary Committee's lack of protocol for vetting sexual misconduct claims "suggests that the committee has learned little from the Thomas hearing, much less the more recent #MeToo movement."

The GOP's calls for Ford to testify a week after her accusation was made public and their refusal to have the FBI investigate her claims seem to bolster Hill's point. Regardless of how you view Kavanaugh, legal experts across a political spectrum say allowing Kavanaugh's attorney to cross-examine Ford would be unheard of.

"This is a confirmation process, which the Senate alone has responsibility to conduct, and it has always been conducted by senators, their staff, the committee, the full Senate," Thomas Jipping, deputy director of the Edwin Meese III Center for Legal and Judicial Studies at the Heritage Foundation, a conservative think tank that supports Kavanaugh's nomination, tells Bustle. "It is not a legal or judicial process; therefore any elements like the involvement of outside attorneys and things like this are completely inappropriate."

"You don’t bring your character reference in for the people you’re interviewing for a job in order to cross examine their experience with the candidate," says UltraViolet executive director and co-founder Shaunna Thomas. "You take it for what it is, you access whether or not you think what they have to say about that candidate is disqualifying, and then you make your choice."