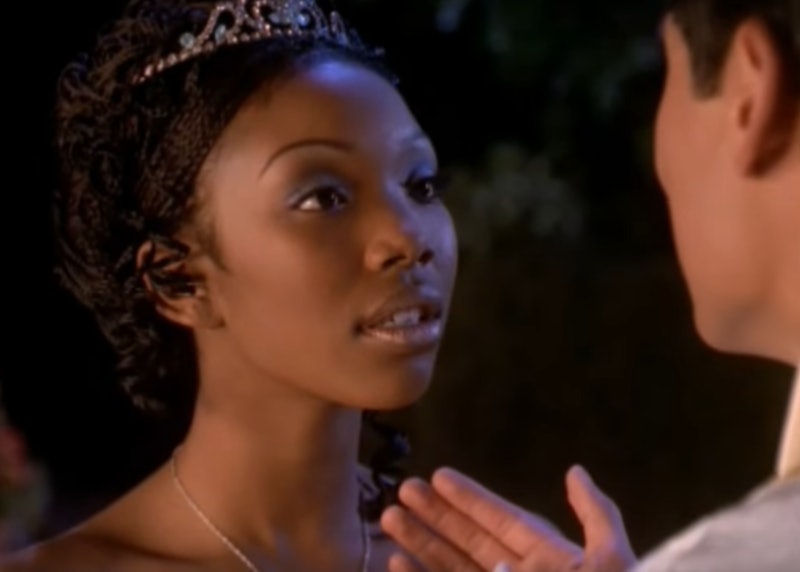 Next month, the best live-action adaptation of Charles Perrault’s story about a young woman whose life is turned around after she meets a fairy godmother will celebrate its 20th anniversary. And in honor of this milestone, actor Paolo Montalbán, who played Prince Charming in the movie, shared a photo of the Rodgers & Hammerstein’s Cinderella cast on Wednesday. “20 years ago Cinderella aired on ABC,” tweeted Montalbán. “Watched by 65 million of you! Thank you, all! I had a dream, and it came true. An AMAZING cast.” (While he posted this tweet on Oct. 12, the actual 20th anniversary appears to be on Nov. 2, according to IMDb.)

Montalbán's all-caps reaction is beyond warranted; the Wonderful World of Disney and Whitney Houston present Rodgers & Hammerstein's Cinderella cast is about as amazing as it gets. (And yes, that is the movie's full title.) The musical stars Brandy as Cinderella, Bernadette Peters as the Wicked Stepmother, Whoopi Goldberg as the Queen, Montalbán as the Prince, Victor Garber as the King, Veanne Cox and Natalie Desselle-Reid as the Wicked Stepsisters, and, of course, Whitney Houston as the Fairy Godmother. Whew. The Wonderful World of Disney and Houston were not messing around when they put together this roster.

‌Here’s something you might’ve not known about this masterpiece: the “I Wanna Dance With Somebody” legend was originally going to play the movie’s lead. As Houston told Jet magazine in 1997, “Yes, I was supposed to be Cinderella.” However, she decided that the glass slipper of a role didn’t fit her as well as it fit someone else. She elaborated,

“But after you get married and have a baby, it’s like, ‘I’m not feeling quite like Cinderella.’ Although I love the wonder and the innocence, I could’ve very well portrayed Cinderella, but it would’ve taken a lot of reaching. Instead, someone who’s 18 and full of that verve and that life: Brandy’s perfect. She has the energy, the verve, the eyes, the wonder. And our relationship comes off really well on-screen because it starts from real life.”

Is Hilary Duff’s A Cinderella Story a must-watch every time it pops up on cable? Oh, but of course. Is Ever After a terrific drama? Yes. Is 2015’s Cinderella flat-out gorgeous? You know it. Is the Julie Andrews version of Rodgers and Hammerstein’s Cinderella all things delightful? Obviously. However, none of these movies feature the incomparable Whitney Elizabeth Houston belting out “There Is Music In You.” So uh, that’s that.

Though Houston’s performance alone would be magical enough to send this version of Cinderella straight to the top of the Cinderella Adaptation Hall of Fame, it isn’t the only reason why it rules as much as it does. This movie is flat-out groundbreaking: For the first time ever, Cinderella was portrayed by a black actor on screen, an important move for a genre that’s primarily made up of princesses played by white actors. In a 2012 interview with Complex, Brandy said this role was "a moment" for her. She continued,

"To be the first African-American princess for one, and to be chosen by my idol, my mentor, someone that means everything to me and still does, to be part of a multi-cultural cast, and to work with legends like Whoopi Goldberg, Bernadette Peters. It was a fairytale. I was really living the dream."

“This may be a first,” Goldberg said of the cast's diverse ensemble in the aforementioned Jet interview. “It makes perfect sense because of who we are. Before, it was either all-Black or all-White. But, never a normal mix of people. This integrated cast is how the real world is. This is more normal than being part of a cast that doesn’t have any color in it. This is perfectly fine. This is how I live.”

"Both Whitney and I grew up on the Lesley Ann Warren version and adored it but when we got older, we looked back and realized we never saw a person of color playing Cinderella. To have a black Cinderella with a pretty face and braids is just something. I know it was important for Whitney to leave this legacy for her daughter.”

And what a legacy it is.

Representation matters, this cast matters, and this movie matters.