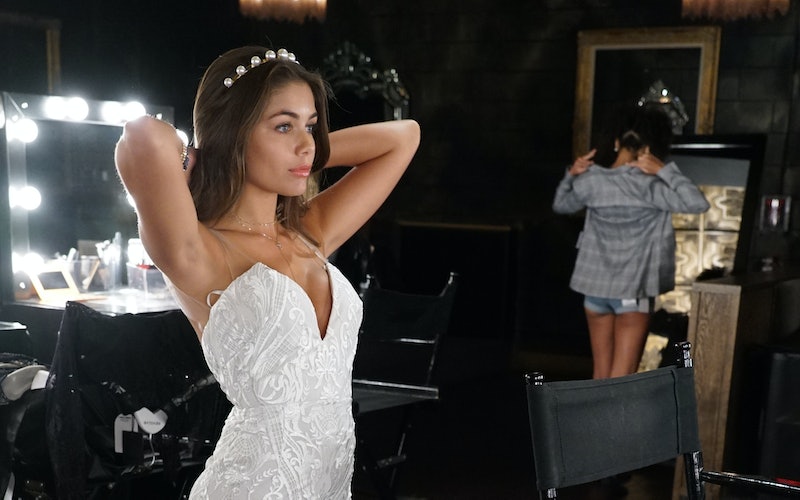 Peter has claimed that no one will be able to spoil his ending of The Bachelor. While that might turn out to be true, Pilot Pete has been dropping clues that Hannah wins The Bachelor since the takeoff of this season. As he heads into hometown dates, Peter feels a connection to all of the final four women — Hannah Ann, Kelsey, Madi, and Victoria F. — but only one of them has had Peter smitten since the very beginning.

Bachelor Nation has been pretty desperate in its attempts to prove that Peter chooses Hannah Ann. She's former Bachelor Nick Viall's choice for winner, as he told Peter when he went on his podcast. And fans have been trying to link Hannah Ann and Peter since filming wrapped, with theories based on their social media activity, like golf-gate, their matching "island time" Instagram posts, and that both of their Venmo accounts appear to be set to private. While fans might be reaching a bit with those assumptions, here are more Bachelor-approved clues that Hannah Ann could win Pilot Pete's heart.

She Won The First Impression Rose

Not as solid of an indicator on The Bachelor as The Bachelorette but still significant, Peter's initial strong feelings for Hannah Ann shouldn't be forgotten. As he told Us Weekly, "From the very first night, I had an insane connection, obviously, with Hannah Ann." He further elaborated to Glamour during the second week of filming. "I'm just very drawn to her, and I'm very excited," Peter said.

When competitors turn against one another, it can often lead to them being sent home. Yet, even though Hannah Ann was involved in one of the earliest dramatic moments of the season with Kelsey and champagne-gate, it never seemed to dim her romantic prospects with Peter. Instead, Peter has consistently said that Hannah did not intentionally steal Kelsey's bottle of bubbly.

"I know Hannah Ann did not do anything maliciously on purpose. I can promise you that," Peter said in his Us Weekly interview. In a BUILD Series interview, Peter 100 percent confirmed he believes she's innocent by riffing on Hannah Ann's own line and proclaiming, "She's not a champagne stealer."

He Trusts Her Intentions

Peter has been very wary that he could be hurt or betrayed like Hannah Brown was with Jed at the end of The Bachelorette. But even though he once worried she wasn't ready for marriage, he has always seemed very confident in Hannah Ann's feelings for him. He told Cosmopolitan during the Costa Rica group date, "I'm really turned on by someone who is persistent and who shows me, especially in that kind of atmosphere, that they're there for me and how excited they are for me. Her intention just was so obvious from the very beginning."

He Has The Most Fun With Her

Peter doesn't want his relationships to be too fun (see: Kelley's exit), but he has stated how he likes Hannah's silly side. While fun alone doesn't mean a relationship could work out, Peter seems to appreciate how lighthearted Hannah Ann can be compared to more serious contestants like Victoria F. and Kelsey.

He Gave Her The Group Date Rose In Costa Rica

Victoria F. might have won the photoshoot and Kelsey may have told Peter she was falling in love with him, but Hannah Ann was the one who took home the group date rose in Costa Rica. Madi was also on that group date, so Hannah Ann certainly had the edge over her other final four competitors back then and maybe that lead will last until the end.

When he chose Hannah Ann over Kelley for the hometown dates, Peter told her, "I have enjoyed every moment with you up until this point." As long as the rest of their dates go as well, he may just want to keep enjoying moments with Hannah Ann forever.