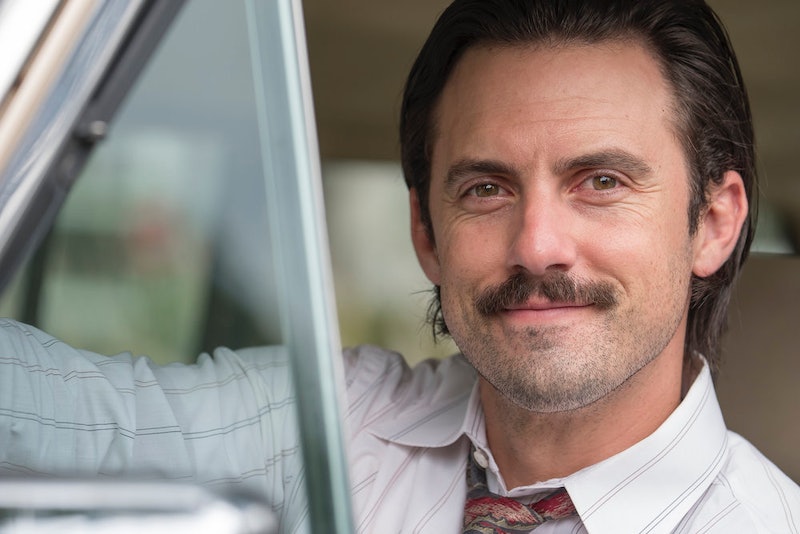 The final moments of the Sept. 26 Season 2 premiere of NBC's weepy family drama finally provided the answer that fans have been craving for a year: how Jack died on This Is Us. Or did it? The episode seemed to imply that the Pearson patriarch passed away in a house fire (sparking plenty of theories about Jack and fire on This Is Us), but the sophomore series has been known to pull the rug out from under its audience before. Should viewers really be trusting the show this time around? Or could it have yet another twist in store regarding Jack's fate? In fact, if you examine the sequence closely, there are plenty of clues that Jack didn't die in that fire on This Is Us.

First of all, there's the simple fact that Jack dying in a house fire has been one of the most prevalent theories about the character's death since it was first revealed in Season 1 that he had departed this earthly plane. Way back in January, Reddit user AFriendlyInternetGuy predicted that Jack would be killed trying to save Miguel's family from a conflagration — explaining why his best friend's former wife and children have never been mentioned in the present day timeline, and also providing a way to bring the fireman who found Randall back into the story.

Would a show that established itself as one capable of weaving elaborate narrative tricks really do something so… expected? Even if the writers' original plan was to have Jack die in a fire, those theories have been floating around for months, which means they would have had plenty of time to conceive of a new tragic fate for the character that would have been more shocking.

But the fact that it's somewhat predictable isn't the only knock against the fire fakeout. For one, Kevin is wearing a cast on the day of the fire, but not at his dad's funeral. That means more time had to have passed between the night of the fire and Jack's actual death.

Also, many viewers were quick to point out that the belongings in the back of Rebecca's car — presumably Jack's personal effects that were gathered after his death — don't appear charred or singed in the least… a curious detail if the person they belonged to had died in a burning building. That detail implies that Jack died in some other unrelated way on the same night as the fire; an all-around terrible day for the Pearsons, to be sure.

If Jack didn't die in the fire, that doesn't necessarily mean that his death was unrelated to the fire, however. Reddit user oakzap425 postulates that perhaps Jack was killed rushing home when he was notified of the blaze, maybe by dying in a car crash on the way to the house. This theory gets interesting when you consider the possibility that it was somehow young Kate who set the fire in the first place — whether accidentally or on purpose — which would explain why adult Kate still holds herself responsible for her father's demise.

This theory could also explain Rebecca's tearful breakdown upon arriving at the scene of the dying inferno. Maybe those weren't just the tears of someone overwhelmed by so much tragedy (although that would certainly be understandable), but rather the reaction of someone who is seeing the burned-out husk of her beloved family home for the first time. If Jack died on his way to the house and Rebecca went straight to the hospital to be with him, this could be the first time she's been made aware of the true extent of the damage to the house.

It's entirely possible that Jack's pristine belongings, Rebecca's breakdown, and Kate's guilt all indicate that he didn't die inside that burning building. Then again, it's also entirely possible that fans are reading too much into the scene and trying to come up with an elaborate theory to explain away a somewhat predictable turn of events. Either way, audiences probably won't find out the truth for several more weeks, as This Is Us continues to torture its viewers with the mystery of what really happened to Jack Pearson.

More like this
The New Bachelor Will Be Announced Next Week & Here Are The Top Contenders
By Grace Wehniainen
Nicola Coughlan Shared A Lady Whistledown Excerpt From ‘Bridgerton’ Season 3
By Grace Wehniainen, Alyssa Lapid and Sam Ramsden
A New 'And Just Like That' Table Read Pic Confirms A Key Character's Return
By Jack Irvin and Grace Wehniainen
You’ll Definitely Recognise Both Of Ty Tennant’s Parents
By Maxine Harrison
Get Even More From Bustle — Sign Up For The Newsletter