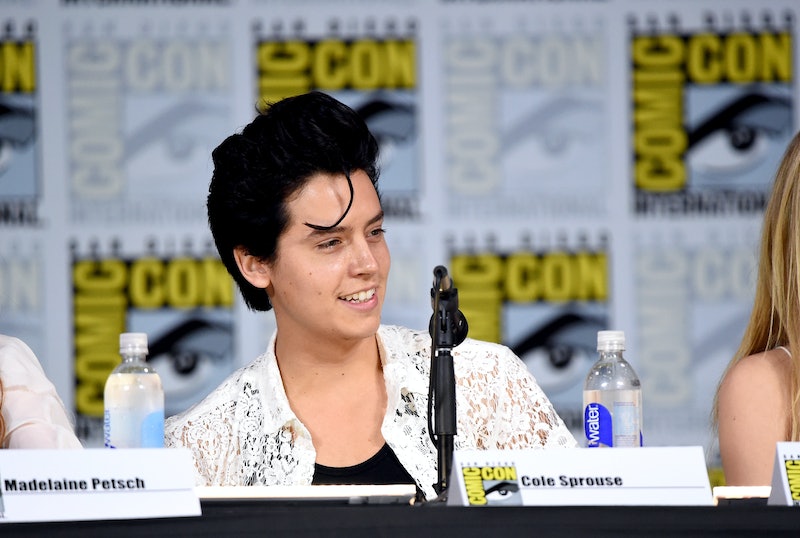 Arguing about which Harry Potter house one most belongs in is a decades-old tradition for fans. Once personality quizzes, tests, and the like took off on the Internet, the Fiendfyre flames were fanned. By the time J.K. Rowling launched the Pottermore website, it seemed as if fans could finally achieve their "official" house designation. And now, in 2017, Cole Sprouse settled the Harry Potter house debate for good. Kind of. Sort of. It's really more of another take on it, but he may have a point.

On Oct. 21, Sprouse took to Twitter to voice his thoughts on the endless pit of "Which house are you?" that defines a corner of Harry Potter Internet fandom. Considering Sprouse is an integral part of more than one massive Thing — he's acted on Friends, starred in two Disney Channel sitcoms, and now The CW's Riverdale — it seems worth it to seriously consider his stance.

Now, the actor's thoughts on the Harry Potter house debate may shock you, so it's worth it to be prepared. They're nothing crazy, but it's certainly a new take, and it arrived seemingly out of nowhere on a Saturday afternoon. The man is yet to follow it up with a clarification. Here it is:

So, let's unpack this for a minute. What about fighting over a Hogwarts house makes one a Hufflepuff, per se? They're hardly known for being combative. Gryffindor are the hotheads, and Ravenclaws like to be right. Slytherins are more likely to incite something just for the heck of it. Why does arguing a Hufflepuff make? It might be, though, that Sprouse was suggesting the nature of the dispute makes said disputer a member of the House of Black and Yellow. In other words, those least willing to be defined as Hufflepuffs are the most prepared to argue over it. That's what Sprouse seems to be implying.

Hufflepuff gets a bad rep on the Internet, which has always seemed unfair. Why are folks being punished for having loyalty, hard work, and patience as their key attributes? Hufflepuffs are, by and large, the friendliest of the Hogwarts houses. They're the most instantly welcoming. Also, lest fans forget: Cedric Diggory was a Hufflepuff. He was hot and he was a good guy. Does Cedric seem like the type to debate over where he belongs? No. No, he does not.

Hufflepuffs are honorable — literally, by definition. They're not haughty, like Slytherins often are, or aloof like a Ravenclaw. So, while Sprouse has firmly put down his foot, I'd say it's still safe to do further research. Another question worth asking: Precisely in what ways can one argue over their house? Even before the age of Internet quizzes, Harry Potter fans were able to self-identify as the house of their choosing, which every fan has a right to do. Plus, the Sorting Hat takes preference into account. Can one be denied their preferred house? If so, who is providing this denial? If the Internet's Hufflepuffs are arguing with quiz results that stated otherwise, then that would be deeply Hufflepuffian, given their need for justice. If the Hufflepuffs are mediating arguments between proposed members of other houses, that would also be in character for them.

It all comes down to this: Sprouse, fans are going to need some more information from you. In what context are these arguments? What house would you define yourself as, and would Jughead belong to the same or different? Give the fans a follow-up tweet, an @, or anything, just to let people know what you meant. Or the Ravenclaws will be forced to dissect this until he end of time.

More like this
Confusion Reigns After Kanye Changes His Instagram Profile Pic To Kris Jenner
By Jake Viswanath
The Try Guys Cheating Scandal, Explained
By Grace Wehniainen
The Real Reason Russell Brand Decided To Quit YouTube
By Sam Ramsden
Dixie D’Amelio & Noah Beck “Love Each Other” Despite Breakup Rumors
By Julia Emmanuele, Jordyn Tilchen and Grace Wehniainen
Get Even More From Bustle — Sign Up For The Newsletter