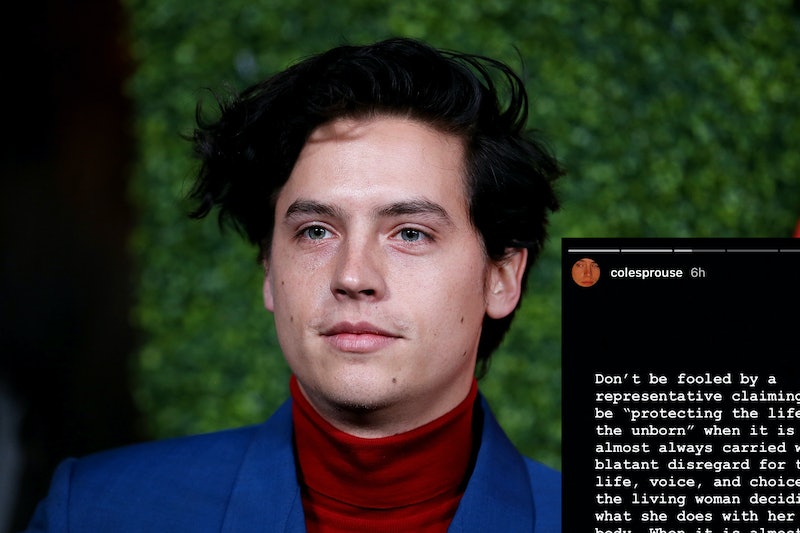 On Wednesday, May 15, it became another dark day in the news cycle when Alabama's Republican Gov. Kay Ivey signed the nation's strictest abortion ban to date into law. Since then, many people have been expressing their fear and frustrations over the law, including one particular Riverdale star. Cole Sprouse posted about Alabama's abortion ban on his Instagram Story on Thursday, May 16, and he's encouraging men to lend their voice to the cause of fighting for women's reproductive rights.

Sprouse shared several lengthy messages on his Story. The Five Feet Apart actor used his social media platform to shine a light on why it's so important for everyone, including men, to do research and help women fight for their rights. He wrote,

"There's no doubt that legislation like the abortion ban in Alabama is aimed at the larger goal of prohibiting abortion nationwide. Don't be fooled by a representative claiming to be 'protecting the life of the unborn' when it is almost always carried with a blatant disregard for the life, voice, and choice of the living woman deciding what she does with her own body."

"When it is almost always coupled with the lack of support for sustainable social and medical services for the child after it is born. They don't care about the life of the unborn, they simply want to profit upon it."

With Ivey signing the ban into law, this means that most abortions are outlawed in the state with the exception of when the mother's life is at serious risk, but this does not include cases of rape or incest. The law doesn't go into effect for another six months. Furthermore, doctors could be charged with felonies and face up to 99 years in prison if they perform the procedure.

As Ivey said after officially making the abortion ban a law, her hope is Roe v. Wade, the Supreme Court case that recognized a woman's constitutional right to end a pregnancy, will eventually be overturned. She said,

"Many Americans, myself included, disagreed when Roe v. Wade was handed down in 1973. The sponsors of this bill believe that it is time, once again, for the U.S. Supreme Court to revisit this important matter, and they believe this act may bring about the best opportunity for this to occur."

Well, Sprouse couldn't disagree with Ivey more. He even wrote a message for men on his IG Story that read,

"Google is free. May not be the most credible source of information, but try to arm yourselves in an understanding of the conversation around abortion and its future repercussions. Especially talking to you — boys."

He then provided a link to Women Help Women and noted, "Don't forget there is a community available to help."

Sprouse is right — more men need to express their outrage over the abortion ban. This fight shouldn't just be left up to women. We need all of the support possible right now. Even actor Russ Tamblyn, Amber Tamblyn's father, is hoping men won't stay silent. He tweeted on May 10,

"Where is men’s outrage for what is happening to the rights of women right now? Where are the men journalists, politicians, husbands, fathers and peers? You’re not loud enough. Get out of your comfort and pick up the weapon of your privilege AND FIGHT. This is our war, too."

And what makes Alabama's news even more terrifying is that it's not the only state in favor of anti-abortion legislation. On May 7, Georgia's governor supported legislation outlawing abortions at six weeks. This is also known as the "heartbeat ban," meaning an abortion is prohibited as soon as a fetal heartbeat is detected. Georgia's abortion ban officially goes into effect beginning January 2020.

Furthermore, on May 16 the Associated Press reported that the Missouri Senate passed a bill banning abortions at eight weeks of pregnancy. There are no exceptions for rape or incest, but only exceptions in cases of medical emergencies. The bill needs at least one more vote of approval before being put into the hands of Republican Gov. Mike Parson, who the AP reports "supports" the bill.

"This is not 'just one state,' the following months and 2020 election will have a tremendous impact on nationwide woman's rights. We now live under a republican majority Supreme Court, and so fundamentalist or republican anti-abortion laws aimed at being passed today are much more likely to be. Stay vigilant. They try to catch you while you sleep."

If you're interested in helping the women in Alabama, there are all kinds of ways you can do exactly that. Now more than ever those who believe in women's rights need to join forces and fight harder than ever before.

More like this
‘RHOSLC’ Star Jen Shah’s Arrest & Legal Drama, Explained
By Brad Witter and Jake Viswanath
The Try Guys Cheating Scandal, Explained
By Grace Wehniainen
Hailey Bieber Just Responded To *That* Viral Met Gala Moment
By Radhika Menon and Sam Ramsden
'Grey's Anatomy's New Intern Got Advice From Dr. Bailey Herself
By Grace Wehniainen
Get Even More From Bustle — Sign Up For The Newsletter