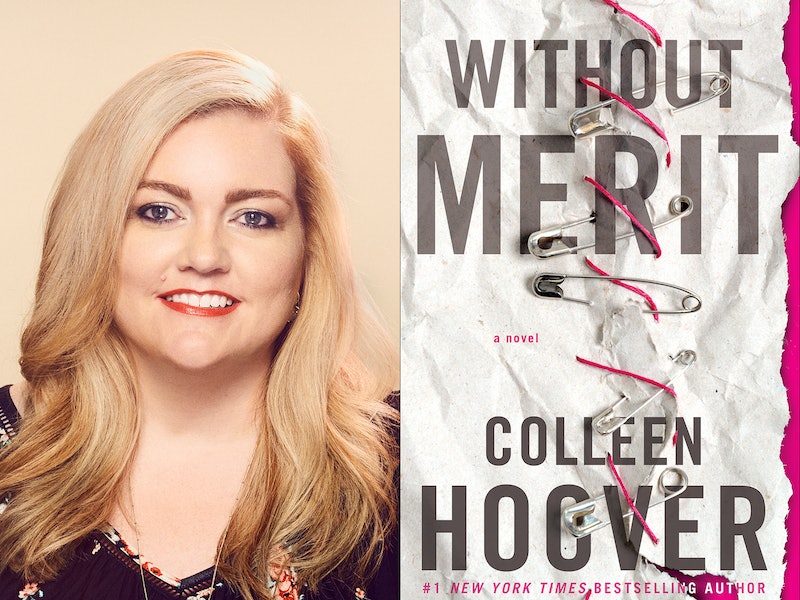 The cover of Colleen Hoover's new book Without Merit is not actually held together by pins and thread, though it appears that way when you pick up a hard copy. Much like the cover, the story is more than meets the eye: it's an new adult (NA) romance, yes, but also a searing portrayal of dysfunctional family dynamics and a teenager coping with mental illness.

A pioneer of NA novels, the New York Times bestselling author's new book centers on 17-year-old Merit Voss, whose family is hanging together by a thread. Merit's twin sister Honor and older brother Utah barely speak to her. Her father Barnaby left their family to marry his pregnant mistress, and her mother, who suffers from social anxiety, spends her days in the basement of their home. All the trauma inflicted by her family has begun to fester in Merit, and she spirals into a depression she refuses to acknowledge out of fear that her family will distance themselves even further from her.

"I wasn't sure where Merit's character was going to take me when I started the journey," Colleen Hoover tells Bustle. "I do think a lot of what I write is influenced by my experiences as a social worker, although I never intend for it to be. I just go where the characters take me."

Unlike many of Hoover's other books, Without Merit is very light on the romance. Although Merit's has feelings for her sister's boyfriend and their newest houseguest,Sagan, their relationship remains platonic for most of the book.

In fact, Sagan's character acts as a voice of reason for Merit throughout the novel. He quietly observes the family and privately illustrates his observations of them. Merit stumbles upon a few of these drawings, which gives her the opportunity to literally examine her own family and her own self through the lens of someone else. Through Sagan, Hoover puts the proverbial "a picture is worth a thousand words" adage to the test by interspersing his drawings throughout the novel that visually articulate thoughts Merit cannot admit to herself.

"I was writing the book as the artist [Brandon Adams] was creating the drawings, so I would explain a scene to him and we would discuss what the drawing should be. I think my favorite drawing is the one of Merit at the bottom of a pool with a floating brick tied around her," Hoover says. "I believe this drawing encompasses what her character feels throughout the book and think it’s the perfect representation of the book as a whole."

Hoover says that she really wanted to drive home the point that family members need to see matters from multiple perspectives in order to fully understand each other. "I like seeing things from every perspective and I always try to incorporate that theme into my novels somehow," she says.

Readers learn that Sagan is American, but his Syrian father moved the family to Syria when he was a child. Though Sagan moved back to the United States as tensions were rising in the region, his parents and sister did not, and they have since been stuck in limbo. Learning about Sagan's past helps Merit become more aware of things outside her immediate surroundings. His history isn't meant to serve as a plot device to accelerate Merit's personal growth nor is it used as a measure for which character has it worse; rather, it gives the story a wider angle. Hoover also leaves the door open for more stories about Sagan. "I was moved by the story of what started the Arab Spring and have been wanting to include that in a story for a while now," Hoover says.

Hoover explains that before writing the book, she came across an article about the 15 young boys in Dara'a, Syria, who were imprisoned for writing "The people want the regime to fall" on the wall of their school, which many believe set off the uprisings in Syria. "For years I was aware of the Syrian refugee crisis, but I had no idea how it began," Hoover says. "No matter if politics are of interest to a person or not, the story of children in a schoolyard spray painting graffiti that created a chain of events that turned into a civil war is a very moving part of history."

Because Sagan finds it emotionally difficult to discuss his past in the book, readers only know what he's revealed to Merit, but as part of her research to bring authenticity to his story, Hoover got in touch with one of her readers in Syria, whom she met online when the reader commented on the difficulty of finding books in her area. "I reached out to her and inquired about her life in Syria. I informed her I was writing a book with a Syrian character and she was very willing to answer any questions I had," Hoover says.

Hoover says she wasn't trying to comment on the Arab Spring politically, but chose to include it in the book because it "touched [her] on a human level."

When I walked away from this book, I kept returning to one particular quote: "Not every mistake deserves a consequence. Sometimes the only thing a mistake deserves is forgiveness." This quote ties the story together, setting the roots for the overarching theme of redemption. "Forgiveness and understanding are lacking in this family and are ultimately what each of them have to obtain before finding closure with one another," Hoover says. Many times, it's difficult to move past one's pride and hurt to start over, but Without Merit demonstrates that it's never too late to start rebuilding bridges.

Without Merit by Colleen Hoover, $12, Amazon