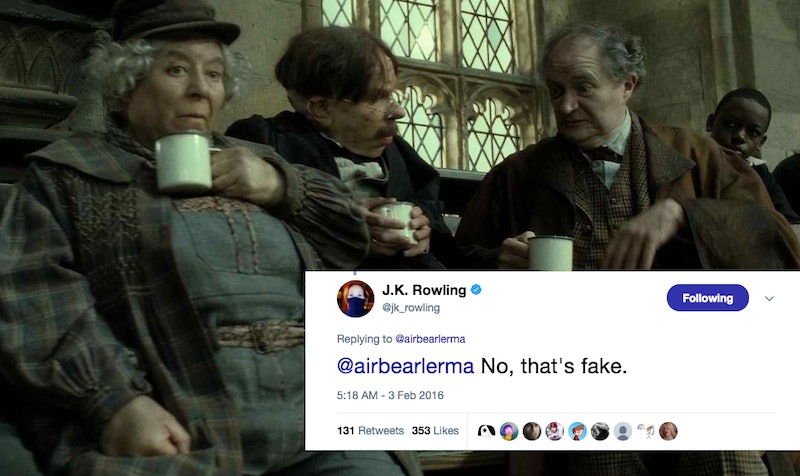 I think you will agree that the internet is a weird place, and one of its more slippery aspects is the act of "going viral." What feels like a shot in the dark, a shout into the void, becomes a conversation topic among thousands, if not millions, of strangers. Case in point: this Twitter prank accidentally made it into Harry Potter canon — and the creator has now spoken out about how a little joke snowballed into what is now a historically documented piece of canon trivia.

In a post-published yesterday, Nov. 29, Willie Muse, a writer for CollegeHumor, laid out the years-long evolution of what began as a one-off article. It all began in 2015, when Muse and a co-worker, Amir Khan, penned a piece called, "J.K. Rowling's Twitter Is Out Of Control." The point behind the article, which was largely a list of tweets, was to goof on Harry Potter author Rowling's habit of answering individual tweets about Potter canon questions.

"The basic gist of the thing was to parody the author's propensity for knowing a lot more information about her characters than is written on the page," wrote Muse in his tell-all article.

The listicle began with real tweets, like Rowling's now-famous note about Jewish wizards and witches at Hogwarts....

...Okay it was Hufflepuff.

Screenshots of the more high-key fake tweets from the article began circulating across third-party sites like Imgur, where they received far more attention than the original article ever did, says Muse. The primary reason? The images had gone through so many channels and so many iterations that their original source was lost to the interwebs. And thus, people, like, thousands of people, thought the tweets were real, to the extent that one of the fake tweets even made its way to the Queen Rowling herself.

Muse notes in his follow-up article that in order to bridge the gap between Rowling's real tweets and his own parodies, he concocted one or two that were outlandish, sure, but not completely out of the realm of possibility. A particularly notable one was a little faculty gossip tidbit: that Professor Sprout, of the Herbology department, and Professor Flitwick, of Charms, had once dated. They were now broken up, wrote Muse, but they remained friends. This was published in 2015. On Tuesday, Twitter user @ibid11962 alerted Muse to a little discrepancy reportedly published in the latest edition of Harry Potter and the Philosopher's Stone, released by Bloomsbury earlier this year.

Bloomsbury has already caught on and issued a correction in all forthcoming editions. Bustle has reached out to Muse and Bloomsbury for comment.

But for one brief, shining moment, a mere Muggle content producer shifted the course of Harry Potter history.

More like this
Alan Rickman's Diary Reveals Why He Considered Leaving 'Harry Potter'
By Darshita Goyal
This Episode 6 Moment Foreshadows Viserys' Fate On 'House Of The Dragon'
By Grace Wehniainen
Nicola Coughlan Shared A Lady Whistledown Excerpt From ‘Bridgerton’ Season 3
By Grace Wehniainen, Alyssa Lapid and Sam Ramsden
The Real Reason Your Instagram Story Viewers Show Up In That Order
By Emma Carey
Get Even More From Bustle — Sign Up For The Newsletter