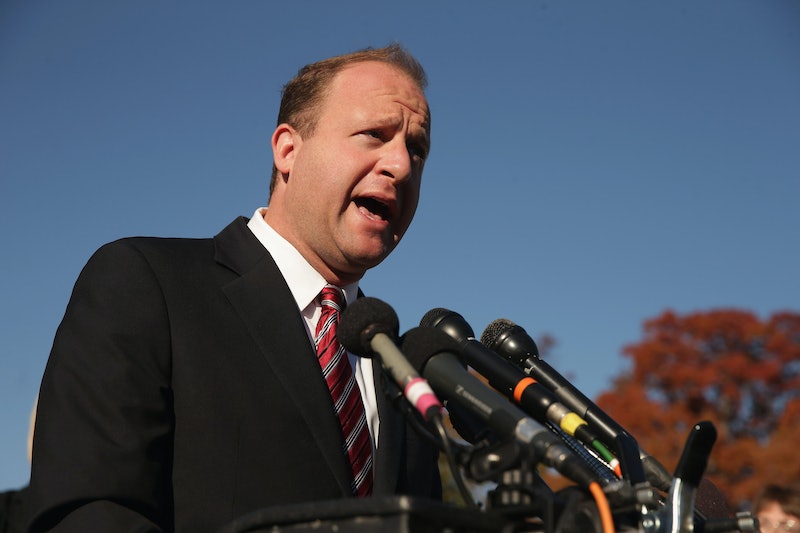 On Friday, Colorado Gov. Jared Polis signed off on a new gun control measure to temporarily take guns away from people believed to be at high risk of harming themselves or others, The Hill reported. Polis signed Colorado's "red flag" gun bill into law following nearly two months of legislative hearings, despite ongoing opposition from Republicans.

“This law will not prevent every shooting, but it can be used in a targeted way to make sure that those who are suffering from a mental health crisis are able to temporarily have a court order in place that helps make sure they don’t harm themselves or others,” Polis said Friday, per The Denver Post. “Today we may be saving the life of your nephew, your niece, your grandchild.”

The bill, entitled the “Deputy Zackari Parrish III Violence Protection Act," was named after a Douglas County sheriff’s deputy who was killed less than two years ago by a gunman "in the midst of a mental health crisis," The Denver Post reported. Proponents of the red flag gun bill have argued that it would reduce the number of gun-related suicides and could even potentially prevent mass shootings, per The Hill. It is important to note, however, that while there are often calls to discuss mental health after mass shootings, people with mental illnesses are far more likely to be the victims of violence than the perpetrators, according to Vox.

According to KMGH-TV, this red flag gun bill has been extremely controversial, with conservative lawmakers expressing their concern that the new measure would strip people of their Second Amendment rights. In fact, a similar bill was rejected last year by the Republican-controlled state Senate. This year's bill, however, made it to Polis' desk despite partisan divisions — in large part because Democrats took back control of the Colorado state Senate following November's midterm elections.

Colorado's red flag gun bill will enable law enforcement officials or family members to request a protection order for an individual's firearms to be confiscated, CNN reported, if that individual is deemed a risk to themselves or to other people. A judge could grant a temporary protection order for up to two weeks, after which a hearing would take place to decide whether or not a full protection order should be implemented for up to 364 days.

Colorado state Rep. Tom Sullivan, a Democrat, was one of the bill's cosponsors, and he celebrated its passage on Twitter. Sullivan's son was killed in the 2012 movie theater shooting in Aurora, Colorado, prompting Sullivan to advocate for more stringent gun control legislation.

According to The Denver Post, the bill has already met significant resistance, with half the counties in the state declaring themselves “Second Amendment sanctuaries" in opposition. Many sheriffs across Colorado have also said that they would rather go to jail than enforce the new legislation, per CNN, because they believe it is unconstitutional. The bill is slated to go into effect on Jan. 1, 2020.