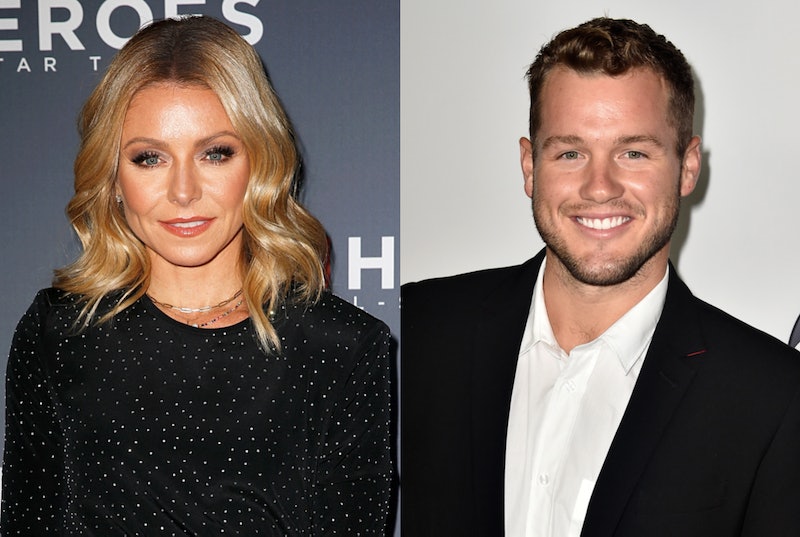 Kelly Ripa may not be a Bachelor fan, but Colton Underwood is totally OK with it. Us Weekly asked the most recent Bachelor lead about the whole situation on Thursday, May 23, and it sounds like he's more than ready to move on. Colton's stance on Ripa's recent Bachelor comments is pretty mature, and it shows just how overblown the "drama" was in the first place.

"I obviously know that Kelly doesn't like the show. I don't know. I was on there. I think there's some mutual level of respect. We're all, we're both on ABC, so I don't take it too personal," Underwood told the magazine. "It really isn't that big of a deal, it just got blown out of proportion."

Ripa's original comments came earlier this month, when she said on Live with Kelly and Ryan that The Bachelor "disgusts" her on May 14. "Guys, you know how I feel about this show. It disgusts me," Ripa said at the time, according to People. "And I thought that I was disgusted because I couldn't stand the idea of 25 exceptional women fighting over one ordinary fella, in my opinion. You know how I feel, ladies: We are too special to be arguing over a guy."

After that, plenty of people outside of Bachelor Nation started getting involved. Even Ellen Pompeo took Fleiss to task for his comments, tweeting that the Bachelor franchise "does NOT pay" Ripa's salary. Pompeo also threw in a dig about The Bachelor's lack of diversity, for good measure.

Colton actually weighed into the drama last week, too, although his tweet seemed to be more of a tongue-in-cheek joke. "How mad is Kelly Ripa going to be when The Bachelor wins an Emmy this year?" Colton tweeted on May 15. Of course, the show probably won't be winning any Emmys, but it was a pretty funny tweet.

Current Bachelorette star Hannah Brown also talked about Ripa's comments during a People interview. Hannah went on Live with Kelly and Ryan on May 16, and just like Colton, she doesn't seem to harbor any ill will toward the host.

"Being a part of the show, it's not women fighting against each other. Really, some of my best friends came from the show and were really supportive," Hannah said on the talk show. "But, ultimately, it was one of the most empowering things that I ever have done because I had to push myself and grow as an individual."

Hannah then told People in an interview published that same day, "Kelly obviously doesn't have the same opinions about the show that I am on, so it was great for me to be able to share my views being someone that has actually been a part of the show." The Bachelorette star might not agree with Ripa's assessment, but it's clear that she still respects her.

Not everyone will like the Bachelor franchise, and that's perfectly alright. Even its stars know the shows aren't for everyone. And based on Colton's new comments, along with what Hannah said, they're totally fine with that.

Colton mentioned the respect he has for Ripa, and Hannah seemed grateful to be able to talk about her own experiences. Since the two of them don't seem bothered by Ripa's comments at all, it's probably best to let this "feud" go and just move on from the whole thing.