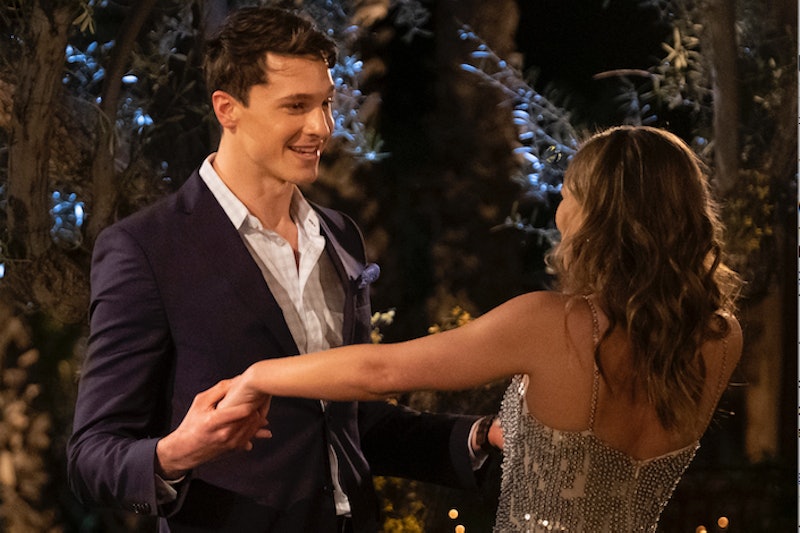 Connor S. hasn't made much of an impression on The Bachelorette just yet, but the moments he has managed to snag with Hannah have been charming. He was the contestant who brought a step stool to meet her during Colton's Bachelor finale — and now that Cam the rapper has started to reveal his true colors, Connor is honestly looking like a better pick for that first rose. Based on Connor S.'s Instagram, the first thing to know about him is that he's 6'6", which is likely what he was hoping to draw attention to with the step stool bit. It's one of the few things he lists in his bio.

Other basic info (though he would probably be content with being remembered as "the tall one"): Connor S. is 24 years old, graduated from Southern Methodist University in 2017, and currently works as an investment analyst at Goldman Sachs in Dallas, Texas, per his ABC bio. According to his Instagram, Connor's never met an outdoor sport he didn't like — or an ocean view, for that matter. His feed is littered with impressive vacation destinations, group pics with his family, and action shots of him golfing, skiing, or aboard a tiny aircraft.

He seems like a guy who enjoys adventure — so he's kind of perfect for The Bachelorette's high-adrenaline dates. Here's a look at what else his Instagram reveals.

He's Close With His Family

The picture above encompasses a few of Connor's favorite things: his family and a beach vacation (this time in Turks and Caicos). Family appears all over his feed: a sibling's graduation, the finish line of a marathon, a trip to the Dominican Republic, then one to Madrid. It seems Connor's family shares his passion for traveling — or rather, that Connor gets his enthusiasm from them.

He Loves The Beach...

In all fairness, beaches do make great Instagram backgrounds, so maybe the abundance of beach posts is half an excuse to show off his abs, and half genuine enjoyment. Either way, with the number of ocean pics on Connor's feed, you definitely wouldn't guess he lives in Dallas from a first look.

...But He's Just As Comfortable On The Slopes

Does he actually live in Dallas? Connor seems to always be anywhere but home.

He Always Fits In A Workout

When Connor isn't skiing, jet-skiing, paddle boarding, hiking, or running marathons, he's working in additional workouts wherever he can. While he seems to have a trainer back in Dallas, there are pictures him sweating it out on the beach, in a field, and even on a boat. Let's hope Hannah enjoys a *very* active lifestyle!

He's All About New Experiences

A few of Connor's captions stress the importance of trying new things: "Never stop doing things for the first time," the above pic reads, while another offers, "True adventures start where the path ends." A third, of Connor's back as he walks along the water, reads "never stop wondering. Never stop wandering." So, he's definitely a believer in soul-searching — and if the soul-searching destination requires a helicopter to get there, all the better.

Connor has lived out experiences most people only dream of — the places he's been and the adventures he's had paint a picture of an adventurous lifestyle that could certainly be intriguing to Hannah. Coupled with his clear appreciation of family, he could be the perfect mix of comfort and excitement for our Alabama pageant queen — but until he gets some one-on-one time in the coming weeks, we can't really say for sure what she'll think.