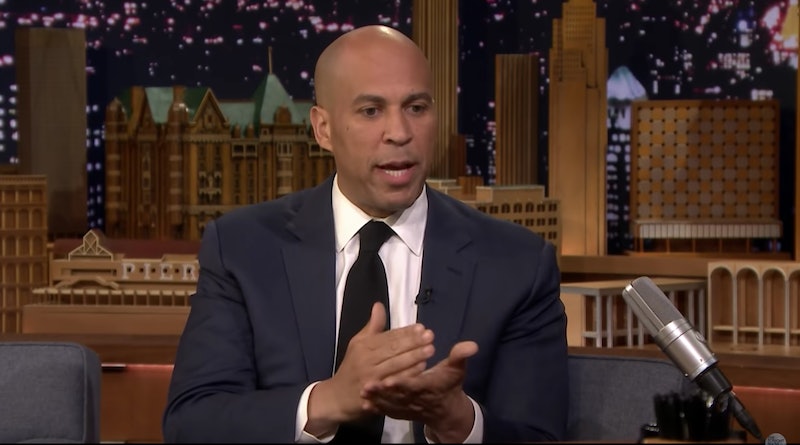 Sen. Cory Booker really likes his job in the Senate. From slavery to women's rights, "some of the most important things" in the country's history "have been debated on this floor," Booker told Jimmy Fallon on The Tonight Show Monday. But that doesn't mean Congress is perfect. In fact, he thinks that young people could change the institution for the better. Booker on Fallon's show had a message for millennials that could, he argues, "transform Congress overnight."

Booker and Fallon spoke at length about what it's like to work in the Senate, what made Booker speak out during the Kavanaugh confirmation hearings, and what his mom said the day he was sworn in. But when Fallon brought up voters aged 18 to 25, Booker was clearly energized.

The New Jersey senator from Newark noted that 18- to 25-year-old voters barely participate in midterm elections — at rates of about 20 percent according to figures by the Pew Research Center.

"If they voted, they would transform Congress overnight," Booker said. "To make dramatic change in this country you don't even need to occupy anything. Just vote, just come out and vote."

The low youth participation rate is "one of the things that's hurting our democracy right now, that's allowing our system to be corrupted." Booker argued that upping that participation rate of young voters— even to just 40 or 50 percent— would be huge. "It is stunning the lack of participation, and then we get cynical about the process, saying it's broken, it's never going to change and we complain about it."

Booker said that both young Democrats and Republicans agree on a lot of issues that the two parties currently spend a lot of time fighting about, be it climate change, women's rights, or LGBTQ rights. So even if youth from both parties voted more, it would still shake things up, the Democrat argued.

"I really believe the opposite of justice is not injustice, it's often inaction and indifference, apathy," Booker told Fallon. "And we have a system that is incredibly powerful, and I believe the power of the people is greater than the people in power. When a Democracy really works and we're vibrantly participating, great things happen."

And those great things might help some of his most vulnerable constituents, Booker said. "I get up everyday in Newark, before I get on the train for Washington, with hardworking Americans who are still not participating in the fullness of the American promise," Booker told Fallon.

And as for loving his job, Booker made clear to Fallon that he does — even though he didn't mind being threatened with expulsion from the Senate during the Kavanaugh confirmation hearings. Sen. John Cornyn, R-Texas, made the threat after Booker read from what was understood to be "committee confidential" documents. Booker responded by saying, "Bring it."

"Let me be clear, I love my job," Booker told Fallon about the moment. "I would like to keep my job. But I don’t want to do it at the expense of not doing what’s right."

In the end, the documents had been released for the public, and the expulsion was not a risk in the first place. But Booker's larger point — that the young people voting could completely change Congress — means future confirmation hearings would look quite different if young voters participated more.