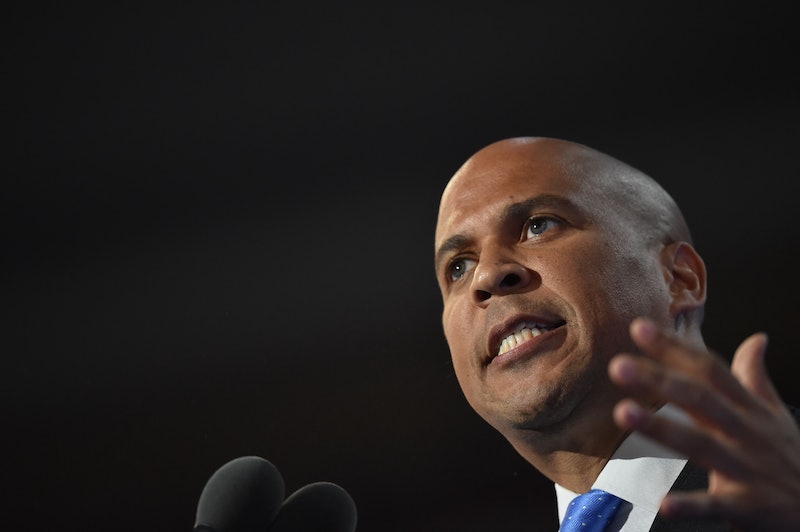 At a time like this, it's nice to remember that there really is still eloquence and positivity in politics — sometimes, at least. Only days before the President's farewell address, New Jersey Sen. Cory Booker wrote an essay on Obama and his legacy. Now, after having seen and cried along to Obama's speech from Chicago, Sen. Booker's words take on another level.

Booker talks about one of Obama's greatest skills, one that he has unfortunately had to demonstrate more than once: his ability to lift up the people around him. Booker talks about this in the general sense — how Obama has responded to national tragedy after national tragedy – and also in more specific cases. The one he chooses to pinpoint is Obama's eulogy for the Reverend Clementa Pinckney, one of the worshippers who lost their lives in the shooting at the Emanuel AME Church in Charleston. While Obama's words were powerful, his voice became even more so when he sang "Amazing Grace".

Through song, says Booker, Obama was able to provide light to those who needed it most, at a time when it seemed impossible. He may not have the eyes and ears of the whole nation as frequently as he has over the past few years, but his legacy will still be there. His light is the whole country's light.

Another specific that Booker mentions is from his own experience. He visited a majority-black school in a low-income area of Newark, N.J., and heard from multiple children that they wanted to grow up to be the president of the United States. This, he says, wasn't the sort of answer he had seen before when he had asked these kids what they wanted to be when they grow up.

Obama didn't talk about those sorts of achievements in his speech. Part of that is certainly because, as a humble man, he most likely doesn't feel comfortable giving himself full credit for things like that. But Booker can speak more fully to the American experience of life during Obama's tenure as president. He has witnessed concrete proof of progress, both on the ground and in the government.

Obama talked about that progress, in the form of his successes in so many realms — climate change, protecting the country from terrorism, improved race relations. And by reminding all American citizens of everything that he — and we — have accomplished, he has reinforced that light of his. Just because he's not your current president, you can still draw on the unfailing strength and resolve with which he faced every challenge to the nation.