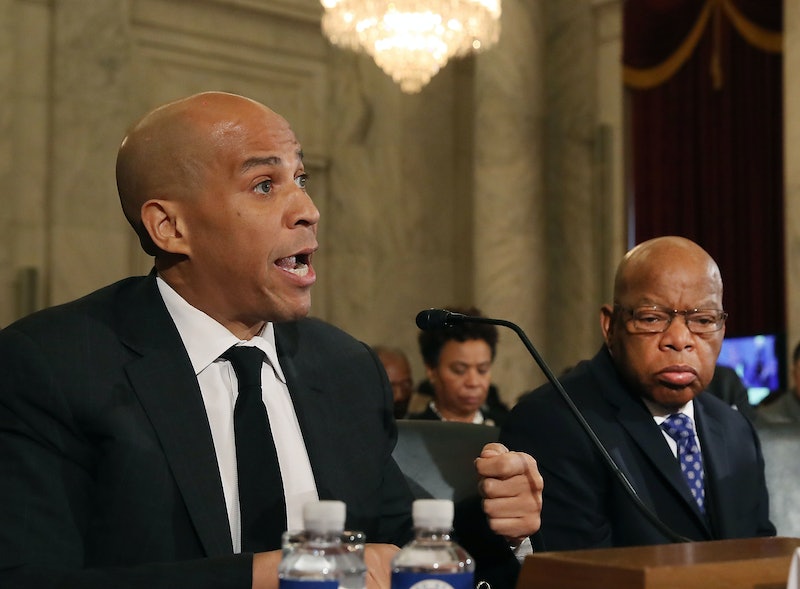 During his impassioned testimony at Jeff Sessions' attorney general confirmation hearing, Senator Cory Booker confirmed what many have long believed: He's one to watch. Since his days as mayor of Trenton, New Jersey, Booker has been a Democratic star on the rise, and in the wake of the party's blistering losses on Election Day, now is the time to place him even further in the spotlight. Booker is the voice the Democratic Party needs right now, and recent history shows that the transition needs to happen sooner rather than later.

Booker's speech at the Senate confirmation hearing was the first time a senator has testified against a colleague in a presidential nomination hearing. But the decision, one Booker admitted he struggled with, paid off.

One of the victories of the modern civil rights movement was the 1957 Civil Rights Act, which in effect made the attorney general not only the chief law enforcement officer of the United States, but also vested in that office the responsibility to pursue civil rights and equal protection for all of America. Senator Sessions has not demonstrated a commitment to a central requisite of the job, to aggressively pursue the Congressional mandate of civil rights, equal rights, and justice for all of our citizens. In fact, at numerous times in his career, he has demonstrated a hostility toward these convictions and has worked to frustrate attempts to advance these ideals.

Booker's eloquence and social cognizance clearly indicates that he's a strong candidate to lead the party in the future, and it's the responsibility of the current leadership to start planning for that future right now. As experienced and knowledgeable as they are, the current party leadership doesn't reflect Democratic demographics, and that's particularly important to change going forward. People of color and younger generations are becoming increasingly aware and less accepting of their lack of representation in the highest echelons of government. They shouldn't have to accept it, either — the party should be practicing what it preaches about racial inclusion and making way for young minorities and women to voice the concerns of their communities in Congress.

Just as President Obama did 12 years ago, someone, maybe Booker or maybe another young, charismatic Democratic player, is going to become the de facto leader of the party. The difference this time is that the party has time to coalesce around Booker and build a solid foundation to support his long-term success.

One of the biggest problems that Obama faced during his presidency was that he couldn't overcome partisan division. The current leadership has the opportunity to proactively tackle that problem by selecting younger and minority representatives to step forward within the party. Booker has proven himself over and over again as an influential and admirable leader whose constituents have faith in him. Now it's time for the Democratic leaders to do the same and elevate him to a position befitting his trajectory within the party.

Booker has the experience and insight needed to inspire a new generation to recommit to the Democratic party, similar to the way that President Obama did eight years ago. The Democrats have to be playing the long game right now, and Booker is going to be an essential part of that barring any unforeseen circumstances. Securing his future in the party is vital to its future, and it would do the Democrats a lot of good to get started now.