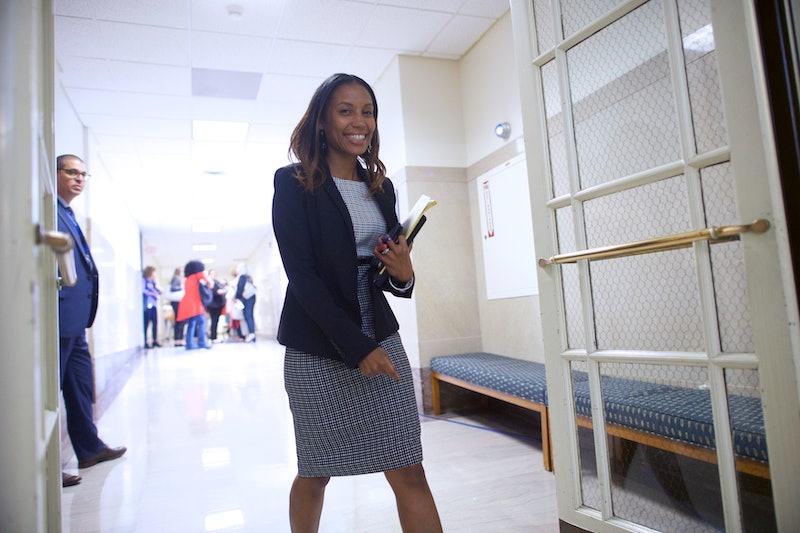 The lawyer responsible for one of the #MeToo movement's first convictions made some scathing comments about the man she put behind bars. Kristen Gibbons Feden, the woman who prosecuted Bill Cosby, said "justice was definitely served" in an interview with the Today show Wednesday morning.

"The individual who sexually assaulted Andrea Constand was nothing more than a con artist, a man who was two different individuals," Feden told the Today show hosts. "A man who we saw on TV, and he utilized that as a cloak so that he could lure women."

A Pennsylvania judge sentenced Cosby to three to 10 years in state prison on Tuesday for three counts of aggravated indecent assault. In April, he was found guilty of drugging and sexually assaulting Andrea Constand in 2004, an encounter he claimed was consensual. The 81-year-old comedian was categorized as a "sexually violent predator" this week, which means he'll be required to register as a sex offender for the rest of his life and attend mandatory counseling.

"It didn’t appear to me that he thought this day would ever come, and you know what? It came," Feden, the 35-year-old attorney responsible for his guilty verdict, said on Wednesday.

After Cosby's first trial ended in a hung jury in 2017, Feden and Constand had to go to trial a second time. Feden had left the district attorney's office to join a Philadelphia law firm by then, but took a leave of absence to head Cosby's second trial, CNBC reports.

"I always look for my strength in the victims, and Andrea Constand... she just was amazing," Feden told Today. "She remained so courageous and so brave throughout the entire process. Did I ever consider whether I want to give up? I don't think so, because her courage and her strength was enough for me to say, 'You know what, let's keep going.'"

Constand, who asked the judge for justice before Cosby's sentencing, was pleased that he'll spend at least a few years behind bars, Feden said.

Andrew Wyatt, Cosby's publicist, asserted that his client was subject to the nation's "most racist and sexist trial" outside the courthouse on Tuesday, The New York Times reports. He went so far as to compare the disgraced actor's sentencing to the persecution of Jesus.

Despite Wyatt's claim that Cosby's sentence was simply part of a "sex war" happening in Washington D.C., the woman he was found guilty of assaulting and the woman who convinced a jury to send him to prison are both glad he didn't get off easy. He was denied bail and was led out of the courtroom in handcuffs. He went to jail immediately following his sentencing.

More like this
Lori Vallow’s Son Was Arrested For Sexual Assault Days Before 'Sins Of Our Mother' Premiered
By Brad Witter
Where Is Armie Hammer’s Ex-Wife Elizabeth Chambers Now After 'House Of Hammer'?
By Grace Wehniainen and Radhika Menon
Women Around The World Are Cutting Their Hair In Solidarity With Mahsa Amini
By Darshita Goyal
Where Is The Bling Ring’s Rachel Lee Now?
By Arya Roshanian
Get Even More From Bustle — Sign Up For The Newsletter