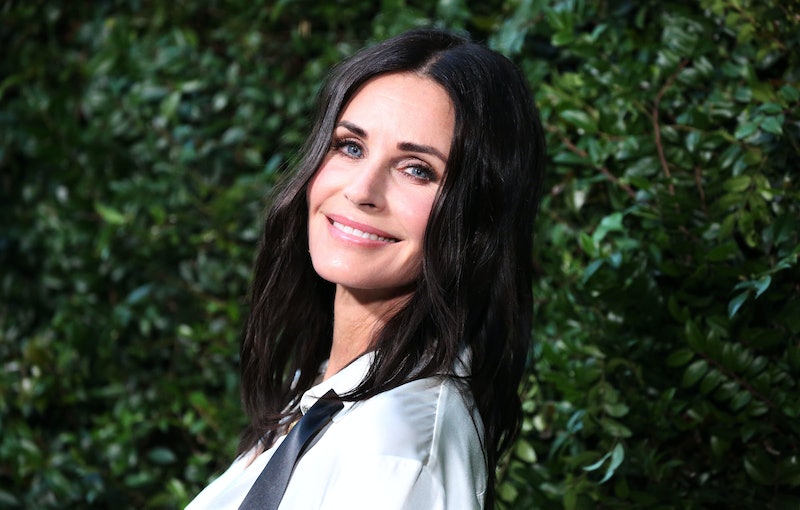 If there's one thing that every Instagram user enjoys, it's a quality throwback pic. The opportunity to see how much friends and family have changed over the years and to reminisce on memories is absolutely priceless. What's even more special is when celebrities share moments from their past, and Courteney Cox's Friends throwback photo is something I never knew I needed until now. Posted last Thursday (May 16), the pic shows the young and not-yet-famous faces of the now iconic cast as they made their way to a trip in Las Vegas.

"The one where the six of us went to Vegas and no one knew we were F.R.I.E.N.D.S yet #tbt #beforeitaired #lovetheseguys," Cox aptly captioned the post. A host of famous faces also commented on the photo, including Lisa Kudrow who wrote, "Look at that! Thanks again Jimmy Burrows. Love you Courteney." Megan Mullally (who plays Karen on Will & Grace) also commented, and gave a little insight into how Burrows did a similar thing with the cast of Will & Grace when they began. "Jim Burrows took the cast of Will & Grace to San Francisco for dinner on that plane during our first season!" she wrote.

James Burrows is an acclaimed sitcom director, who also co-created Cheers. He directed the Friends pilot, and also directed every episode of Will & Grace. Burrows took the Friends cast to Vegas to let them get acquainted with one another before they began filming, which he believes is essential for the characters they are portraying so that their relationships are believable on-screen.

"I don't come in for the day of rehearsal where my actors are going to be on stage. I sit with my cast, and I talk to them about their characters, and I try to get them to like one another because if they do, that's going to come across on screen," he told The Hollywood Reporter in 2016 (via Refinery 29). "So I'll try to do lunch together. Sometimes I'll bring them here for a party, which I did with Mike & Molly. With the Friends kids, I took them to Vegas." He continued:

"I had me and six of them and I said — I don't know why I said this — I said, 'This is your last shot at anonymity. Once the show comes on the air, you guys will never be able to go anywhere without being hounded.' I knew the show had the chance to really take off. So I did that and then I said, 'Do you want to gamble?' and they said, 'Yes.' I said, 'Okay, let's go ahead.' And all six of them didn't have any money so they each wrote me checks for $200 and I cashed them. And that was it. They came back and premiered and they don't have a shot of anonymity anymore."

Matt LeBlanc also spoke of the trip in a radio interview with THR in 2018 (via Comedy Central), where he mentioned that once the show premiered, Burrows was absolutely right. "When we came back for [a] second season it was a different ball game. That summer it was on in re-runs and it was like wow," he said. "All of a sudden, all of the neighbours in my apartment building were like, knocking on the door saying 'Hey!' That's when I kinda migrated to houses with gates."

Looking back at that photo, it's crazy to think of a time where the Friends cast weren't synonymously connected to their characters — It's such a cool insight into what life was like before the world knew them. Hopefully, this won't be the last time we see throwbacks similar to this, especially since Kudrow, LeBlanc, and David Schwimmer all have Instagram accounts. You'll be the first to know if they do, trust.