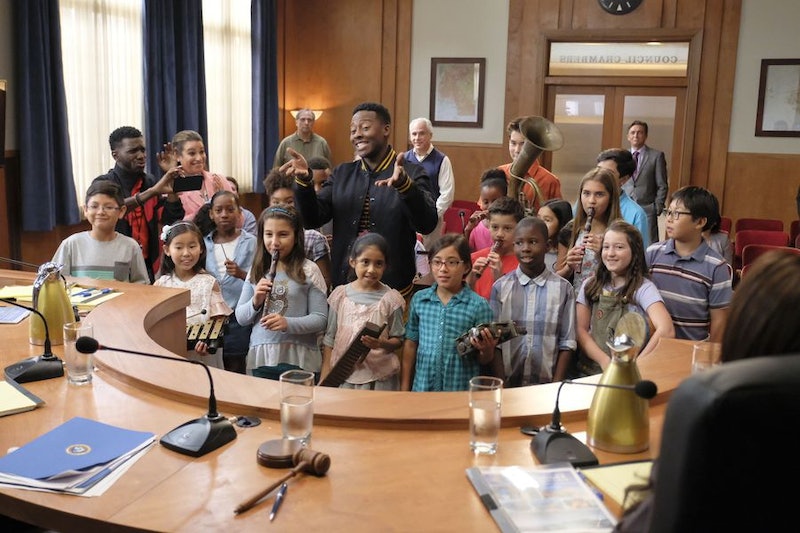 In the Oct. 10 episode, the citizens of Fort Grey rally to save a music program on The Mayor by calling into the city council, echoing the real ways civic engagement has increased in a country where an unlikely candidate made it into office. As many Americans know (or perhaps recently realized), government doesn't begin and end with elections. Even after a candidate ascends to office, the work of governing has just begun, and there are plenty of opportunities for those voters to make their voices heard. And while there's now everything from an app that will fax your congressperson to the ability to send your senator a DM on Instagram, nothing beats the satisfaction of placing a call. On the show, the people boost Courtney Rose to victory, echoing his same concern, care, and appreciation for a public school music program that helps give kids access to instruments.

And while the characters are almost totally successful in their mission this week, the episode does have a few disappointments. Leaving all of the constituents off-screen is an odd choice in the music program plot, if only because T.K.'s storyline puts him on the street right alongside them — maybe showing the livestream take off within the actual town as T.K. and Dina deliver the mail would have made it feel as though the town itself was really rallying behind these kids and standing up for the music program.

It's also worth wondering where the extra cash is coming from if Valentina and Vern couldn't find it in the budget. These are the types of things that The Mayor might want to explore in future episodes to make Fort Grey's feel more like a real city government. Though the show is doing the best they can with what's clearly a very limited scope. A show like Parks & Recreation also started in a small office, but eventually, Pawnee, IN, became one of the most iconic and specific fictional towns in TV history. Eventually, The Mayor should hope for the same.

Many of the calls IRL Americans have made to their reps to show support or disapproval of whatever issue is currently up for debate have gotten pretty passionate — there could have been a chance to hear from some supporting characters about why they care about the music program even beyond the manipulative kid-stream. Even using Courtney's mother as an in would have worked. She clearly did the best she could to provide her son with lots of opportunities. She would absolutely support something that could help other single moms do the same, and having her place a symbolic call would help drive home the kind of people in Fort Grey who stand to benefit from this music program.

And setting the episode largely in real time, with the exception of the filibuster, doesn't allow much time for the reality of losing the music program to sink in. Of course, it's a TV show that has only 22 minutes to tell an entire story, but if some more time had passed between Courtney's intention to do something, or before Valentina has the idea to manipulate the people in the town into supporting the program vocally enough to change City Council's mind.

But overall, the show's finger is right on the pulse of the American people, who have been exercising the same exact right as the characters on the show, calling in to express support or displeasure. And if these fictional citizens can effect change so well, maybe The Mayor is exactly the type of optimism needed to keep people galvanized and working hard towards the type of tangible change that Courtney Rose can achieve in under a half hour.