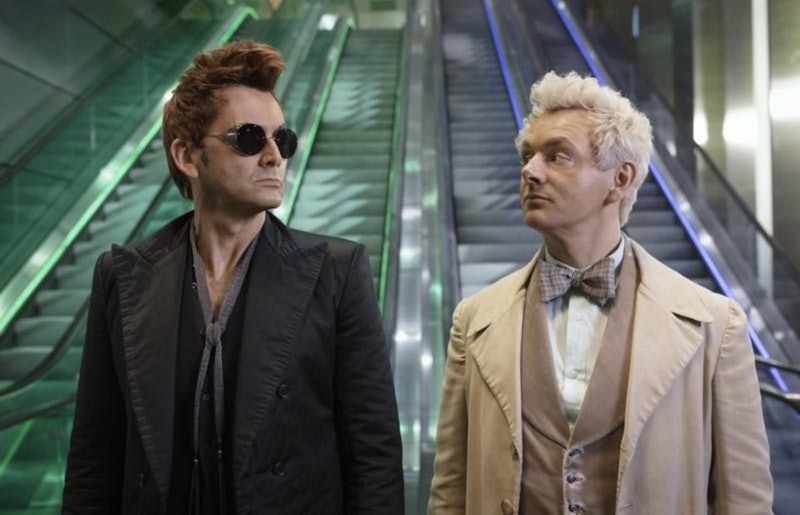 Sitting across from Michael Sheen and David Tennant in a New York City hotel, it's not that difficult to imagine that the coffee that just arrived is actually for Aziraphale and Crowley, the unlikely duo they play in Good Omens. While there's much less bickering than there is between the angel and demon at the center of the fantasy series ("There is something so enjoyable about a relationship where they just sort of shout at each other," Sheen says), the rapport is there. The two actors play off each other, make each other laugh, and finish each other's sentences. It's like visiting with two best friends — minus the pending apocalypse.

"We have known each other for more than a decade, so we've got a start," Tennant says of playing two beings who've been palling around for thousands of years. Sheen adds that, though they hadn't worked together prior to the series, they'd "come up the ranks" of the industry around the same time and had some shared experience. "It is a relief," Sheen says, "when you work with an actor and you realize very quickly, right, the thing that this person really cares about is making [the scene] as best it can be, and [having] a nice time whilst you do it. If you've got those two things in place…"

"That's it, isn't it?" Tennant finishes.

In the series, which is based on Neil Gaiman and Terry Pratchett's 1990 novel, Sheen's angel and Tennant's demon are drawn together by circumstances — specifically, that they've been sent to Earth to perform certain duties by their respective bosses. Meant to be enemies, Aziraphale and Crowley "have literally only got each other," Tennant explains, "because their respective head offices do not see life as they see life, and they are not like the people that they live amongst." Their individual contentment with the lives they lead prompts them to team up to stop the end of the world — which both heaven and hell are trying to bring about — from occurring.

The forbidden friendship, the heightened circumstances, the sumptuous wardrobe — all seem to be speaking directly to 'shipping culture. There are even a few moments throughout the series where Aziraphale and Crowley are mistaken to be or referred to as a couple.

"What are you implying?" Tennant responds playfully when asked if the relationship was meant to be open to interpretation. But really, they know. (Also, Crowley/Aziraphale 'shippers have been around since the book first hit shelves almost 30 years ago. It's a thing.)

"There's so much fan fiction and fan art," Sheen says. "I saw a picture the other day someone put online of me braiding your hair."

Tennant laughs. "I didn't think they got that picture."

For Sheen, Aziraphale's feelings toward Crowley are all based in character. He figures angels are all about sensing and celebrating love, wherever they find it. "And I thought, what happens if you're someone who just loves things, if you spend all your time with your supposed enemy. How does that work? And then eventually I just found myself, as Aziraphale, kind of falling in love with Crowley. And then that became kind of interesting to explore that beast."

Tennant, meanwhile, thinks it's understandable that viewers contextualize the relationship in different ways since to him, Good Omens is a buddy comedy. "They are love stories," he says. "All of them are, and this is too. What direction that love ends up going in is perhaps in the eye of the audience to behold."

Plus, the dynamic is just an irresistible one — a take on a very common trope. "Bad boy meets vicar. I'm sure there's a lot of stories written about that in some dark corners of the internet," Sheen muses. Adds Tennant: "Do you think there's bad boy/vicar fic?"

Good Omens deals with many ambitious themes — life, death, faith, love — all with a healthy sense of humor, of course. But ultimately, it's a story about friendship. And viewers do leave Crowley and Aziraphale differently than they found them. "I imagine the experience that they go through in this means that they're quicker to acknowledge that they're best mates," Tennant says.

And, since they're eternal beings, the conclusion of the series may leave you wondering what the pair are up to now.

"I think they're keeping their heads down," Tennant says. "I think they’re probably just going, 'Oh what restaurants haven't we tried?'"

"'Let's go to a beach and forget,'" Sheen suggests.

The actors, on the other hand, haven't fully committed to leaving these roles behind. Good Omens is a limited series, meaning there won't be a Season 2. But don't be too surprised if they pop up in another form.

"We joked [that] on the theatrical tour of this, we will play each other’s parts," Sheen says. "Or alternate," Tennant proposes. Sounds heavenly.

More like this
On 'The Handmaid’s Tale,' Christine Ko Fights Back
By Gretchen Smail
Mike Flanagan Teases 'The Midnight Club' In This Exclusive, Creepy Clip
By Grace Wehniainen
Lauren Lyle Is Keeping The Contents Of Karen Pirie’s Bum Bag A Mystery
By El Hunt
‘SNL’ Finally Spoofed Nicole Kidman’s Weirdly Beloved AMC Ad & Nailed It
By Stephanie Topacio Long
Get Even More From Bustle — Sign Up For The Newsletter