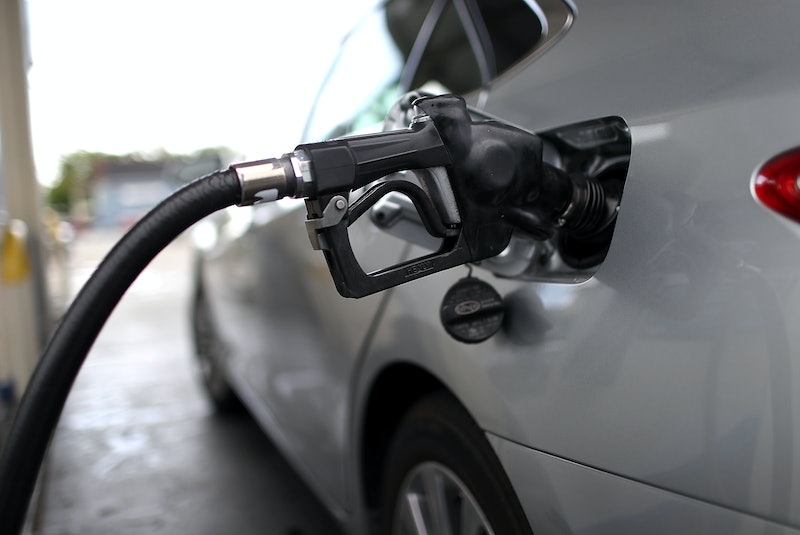 This is why we can't have nice things. Energy company Shell recently removed life-size cutouts of a female employee from its Malaysian gas stations because men wouldn't quit groping, kissing, and otherwise harassing the defenseless decoration. In other news, dozens of mothers across Malaysia have reported sudden attacks of vague disappointment and can't quite put their fingers on the reason why.

The cutouts, depicting a smiling young woman wearing the Shell employee uniform and a headscarf, were placed next to gas pumps in hundreds of Malaysian stations. It didn't take long for the fairly generic advertisements to turn sexual, as men quickly started taking pictures of themselves touching the woman in all sorts of inappropriate places. Some grabbed her chest and crotch, while others filmed themselves kissing her — you get the idea. Naturally, the photos found their way to social media, where they became so popular they drew the attention of Shell itself.

On Tuesday, the energy giant announced that they would be withdrawing the cutouts immediately from all its stations. According to Mashable, Shell went on to call the images "distasteful" and "disrespectful" in a statement to the press, noting that they went against local culture and the company's values.

The woman featured in the advertisements, a 25-year-old employee named Nor Shafila Khairusalleh, also spoke out against the images. According to RT, she told Malaysian-language news outlet mStar that she felt "humiliated." The photos may have been meant maliciously, but the men were still harassing her image.

As others have pointed out before, jokes speak volumes about cultural norms. It's telling that when confronted with a cutout of a woman — an image that can't fight back — the first impulse of so many men was not to pose with funny faces or pretend to pick her nose, but to treat her like a sexual plaything. Next time someone says we don't need feminism, kindly point out that all too often, women's bodies (and apparently their images) are seen as public property.

Before you get too cranky, though, there's a bright side: One man who posted a picture of himself kissing the cutout later apologized, admitting he had crossed a line. Here's hoping that will become the next big trend.