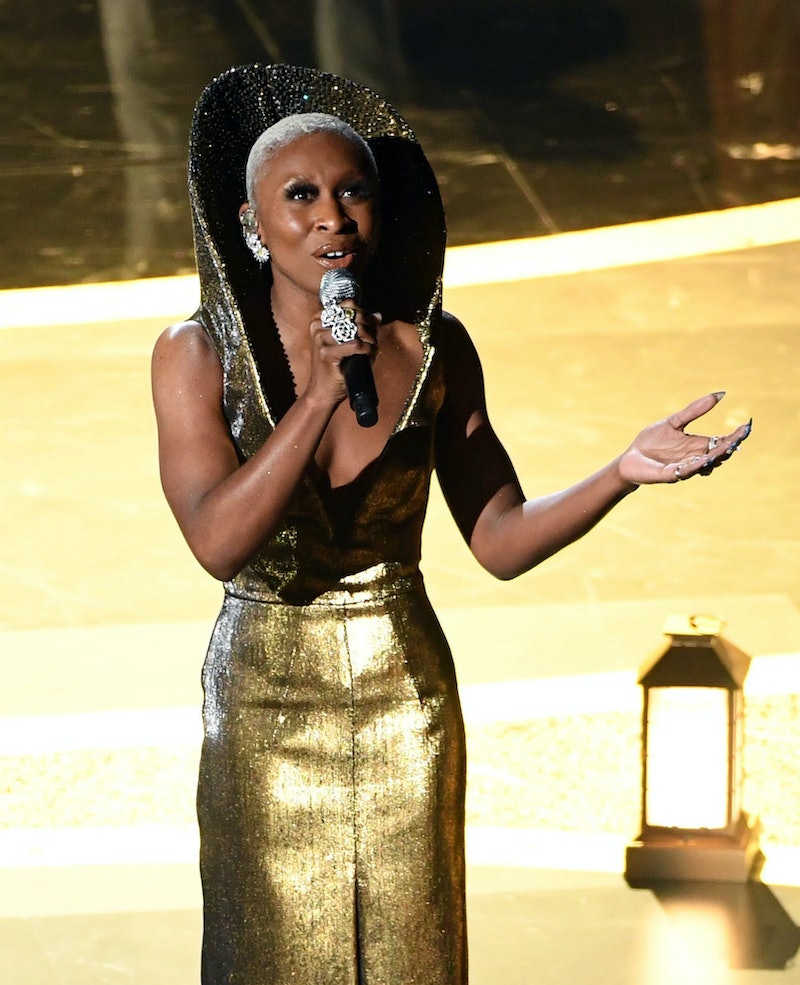 The 2020 Oscars included a handful of memorable musical performances, including one by This Is Us star Chrissy Metz and a throwback performance of "Lose Yourself" by Eminem. But it was Cynthia Erivo's Oscar performance of "Stand Up" that will go down in Academy Awards history, judging by the reactions both inside the Dolby Theatre in Los Angeles and everyone watching at home on Twitter.

Erivo, who was also nominated for Best Actress for her performance in the film, took the stage in a stunning gold dress, flanked by gospel singers in the audience to perform the Oscar nominated song from Harriet. She is also the third consecutive actress to be nominated for both a performance and a song in the same movie. The others were Lady Gaga for A Star Is Born and “Shallow" in 2019, and Mary J. Blige, who was nominated for Best Supporting Actress in Mudbound and for “Mighty River" in 2018.

It's no secret that Erivo can sing and act — she's one award away from an EGOT, after all — but her pitch perfect performance received a standing ovation from everyone watching. It was also especially poignant given the fact that Erivo is the only actress of color nominated for an Oscar this year.

Erivo said on the BBC Breakfast Show that attending and performing at the awards would be "bittersweet" for her. "I want it to serve as an example of why we need to look at how we judge these films and I want to make sure it doesn’t look like this every single time," she said.

She continued, “There are people who also deserve to be a part of this and we’ve just got to figure out how that happens. Hopefully this year will be a turning point for everyone because we are talking about it out loud and hopefully now we can actually make some changes."

Erivo had previously praised actor Joaquin Phoenix for calling out all of the award ceremonies this year for not recognizing the work of people of color at the BAFTAs, saying that it "meant a lot" to her to have someone else use their platform to speak on the lack of diversity on the awards circuit.

Between her advocacy, this Oscars performance, and her upcoming role playing Aretha Franklin in Genius, it might just be time that the Academy starts paying attention.

More like this
14 Women To Watch This Oscar Season
By Marina Watts
Cynthia Addai-Robinson’s Husband Is The Hype Partner We All Need
By Darshita Goyal
Dixie D’Amelio & Noah Beck “Love Each Other” Despite Breakup Rumors
By Julia Emmanuele, Jordyn Tilchen and Grace Wehniainen
Everything To Know About Taylor Swift’s 10th Studio Album, 'Midnights'
By Grace Wehniainen and Jake Viswanath
Get Even More From Bustle — Sign Up For The Newsletter